Many students agree: ‘we love all our Argo ladies from the bottom of our hearts’ 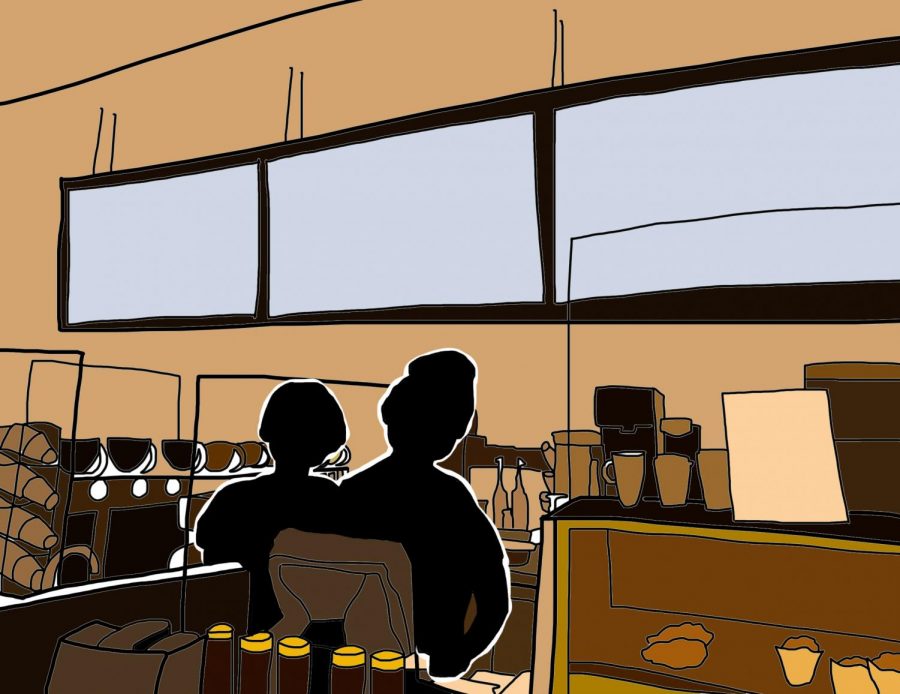 Grace Sabater and Jacqueline Rosario were more than just baristas at Argo Tea. They brought smiles to the Fordham community and developed connections with students.

During a normal semester, if you walked down to the Garden Lounge around 8:30 p.m. on a weekday, you’d find most tables filled with students studying, hanging out or eating, and a line of people in front of Argo Tea. Behind the till were Fordham favorites Grace Sabater and Jacqueline Rosario, providing much-needed snacks, caffeine and general life advice for students.

This semester, nights in the 140 West 62nd Street Building’s basement look different from the way they’ve always been to most upperclassmen. Visits to the Garden Lounge in afternoons, such as the 15-minute break between classes, are lonely, whereas in a normal semester, there might be 10 people lined up to get coffee or cookies.

In September, there were likely fewer than a dozen customers on any given night between 3 p.m. and 10 p.m.

Sabater had worked at Fordham since Sodexo was the dining service, before Aramark took over as Fordham’s dining provider in 2016. Both declined to comment. Severance packages often encourage employees to keep information confidential.

“Why couldn’t Aramark do the same so no one would have to get fired?” Gabby Rivera, FCLC ’21, said in reference to the hiring and salary freeze that Fordham instituted to keep more faculty from being laid off. Aramark’s workers are in a similar situation to Fordham employees in terms of uncertainty of employment.

“It was unfortunate that they were fired with little to no warning,” given that they were told on Sept. 29 that their last day was Sept. 30, Pandis said.

After only a month on campus, Nandini Tandon, FCLC ’24, noted, “I know it’s a really important place for a lot of people,” and Sabater and Rosario are the ones who make Argo Tea such an important place.

From their life advice to their secret menu suggestions, Sabater and Rosario were a staple of Lincoln Center students’ lives.

“They made freshman year bearable, and they just made me feel tethered,” Sofia Anjum, FCLC ’22, said. She was not alone — Mendoza agreed with their necessity to her time at Fordham as well and said, “I’d go to Argo right before closing for a late night pick-me-up, we’d make nice small talk and Grace (Sabater) would always recommend a cool concoction.”

Mendoza’s favorite drink was something Sabater made herself — “No one else would get it right,” she remarked.

Many students saw Sabater and Rosario as more than baristas; they were also supportive shoulders to lean on. Anjum remembered that “they always teased me about my drink order when I seemed a little upset to make me smile.”

On her Instagram, Sabater refers to the Fordham students she once served as her “Fordham babies,” labeling herself “Mama Argo.”

Pandis, who visited Argo on Sabater and Rosario’s last night, also felt the close connection. “I came to know them and become friends with them. I would always talk about my family and hear about their families to the point I came to know their families very well just from stories,” she said.
“They made freshman year bearable, and they just made me feel tethered.” Sofia Anjum, FCLC ’22
Both Anjum and Cathleen Freedman, FCLC ’22, described Sabater and Rosario as “kind ladies.” Summarizing the thoughts of most students who have spent time with Sabater and Rosario, Pandis said, “I can speak for most people at Fordham that we love all our Argo ladies from the bottom of our hearts.”

But students, especially first-years, did not even know that Argo Tea was open; they could not meet the women who left a mark on everyone’s years at Fordham. The Campus Dining website showed the cafe as “closed,” meaning that someone who didn’t usually go to the Garden Lounge had no clue it was even serving food. It is now open from 8 a.m. until 4 p.m. Monday through Thursday.

“The only reason I knew it was open was because I’m a curious freshman exploring campus,” Tandon said.

Even orientation leaders did not know what to tell first-year students when they came to campus. “We told them about Argo, now it’s closing,” Rivera said. Orientation leaders could only use their prior knowledge of what has been available; they weren’t given any new information about how dining services would be altered due to the pandemic.

No one knows how next semester will play out with dining availability, but Pandis is optimistic that the evening shift can return to Argo Tea. “I hope we can get them back when Fordham reopens with a new plan in the spring,” she said.