No, You’re Not Too Sensitive. Professors Should Give Trigger Warnings 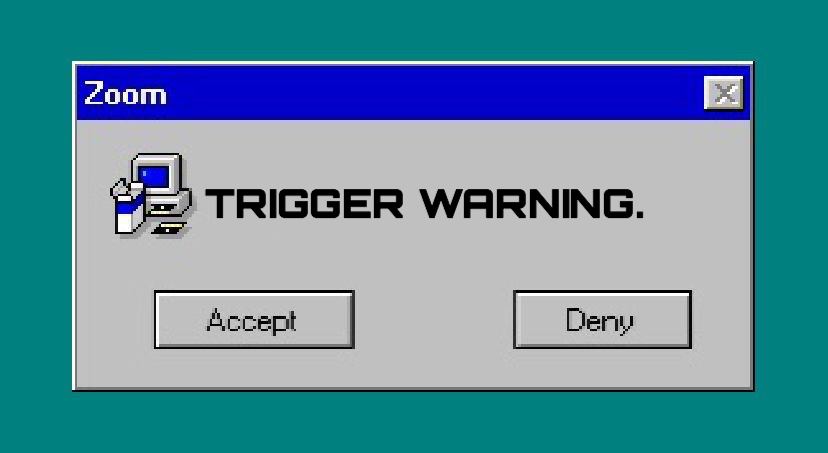 For the past year or so, I’ve heard the word “trigger” and the phrase “trigger warning” passed around carelessly and sometimes even mockingly. No matter who is using it or how it’s being used, there’s always this implicit idea of oversensitivity — that people who get triggered are too dramatic. With that comes a dismissive attitude toward the emotional turmoil that is caused by being triggered, an emotional turmoil that is very much real and very much valid.

So, what even is a trigger? It is anything that reminds your brain of past trauma, putting your mind in a state of perceived threat. Often, someone who has been triggered will feel like they’re reliving a traumatic experience all over again.
“I had to leave the class because it was an extremely intense and painful trigger and caused me to spend the rest of the night in a very panicked state and in a lot of pain.” Anonymous FCLC student
Some people have panic attacks. Some relapse to an eating disorder. Others may feel physical pain. Each person’s experience may be different, and just because you cannot see it does not mean it’s not there.

In all honesty, I didn’t understand the full scope of being triggered until it happened to me. Two months ago, I swallowed my pride in order to be publicly vocal about my past experiences with abuse during my time as an athlete. Following the release of Athlete A on Netflix and #gymnastalliance on social media, I spoke up against abuse of athletes by coaches in the hopes of sparking change in athletic culture.

Even so, I’m still discovering the extent to which this trauma can affect me. There are indeed things that will take me back to bad memories, causing me anxiety and sometimes putting me back into disordered eating habits.

A few weeks into this semester, an assigned reading included a paragraph that described details of physical abuse. It came out of nowhere and, subsequently, so did the painful memories.

Thoughts floated through my mind: The professor should have given a trigger warning, right? Or am I being too sensitive? But I knew that I am far from the only person who has experienced this, so I wondered if professors should be required to give trigger warnings.

When I reached out to Fordham students about their opinions on this question, the answer was, overwhelmingly, yes.

Describing what they called “probably the very worst academic experience of my entire life,” a Fordham College at Lincoln Center (FCLC) student who would like to remain anonymous said that during class, a professor showed “a scene with a graphic depiction of not only r*pe, but incestuous r*pe of a son against his mother” with “absolutely no warning.”

The student said: “I had to leave the class because it was an extremely intense and painful trigger and caused me to spend the rest of the night in a very panicked state and in a lot of pain.”
It is not asking professors to walk on eggshells around us, because triggers don’t happen when someone disagrees with the professor’s point of view or another classmate’s argument in a discussion. What happens is more than just trivial “discomfort” — triggers can do real damage.
Adah Unachukwu, FCLC ’23, believes “trigger warnings are not just a courtesy, they are essential.”

“In my freshman Theology class, the teacher showed some awful pictures of lynching that affected me and two of the other black students in the class,” Unachukwu wrote. “Not only did it affect me adversely, but I spent the rest of my time that semester worried that he would show us similar pictures once again which obviously affected my performance in class.”

Maggie McNamara, FCLC ’23 and assistant sports & health editor for The Observer, is in recovery from an eating disorder and said that trigger warnings are important for her health.

“Topics surrounding food, exercise, weight, diet rhetoric, etc have been extremely triggering,” McNamara wrote. “It would be nice to have a warning just so I could have a little time to prepare myself and build up the mental strength to be around these topics. Hearing about trigger subjects can create a lot more harm when they’re sprung on you unexpectedly.”

It’s true that learning can cause discomfort sometimes. Coming to college means confronting difficult topics that put you out of your comfort zone, having your beliefs challenged and engaging in discussions with people you don’t necessarily see eye-to-eye with.

However, asking professors for trigger warnings is not the same as asking them to make college campuses ideologically safe. It is not asking professors to walk on eggshells around us, because triggers don’t happen when someone disagrees with the professor’s point of view or another classmate’s argument in a discussion. What happens is more than just trivial “discomfort” — triggers can do real damage.

Sure, what triggered me was, indeed, only one paragraph. But that turned into one extra hour of my afternoon, one panic attack and one bulimic episode, and that is one too many.