What is Body Neutrality and Why Is It Important? 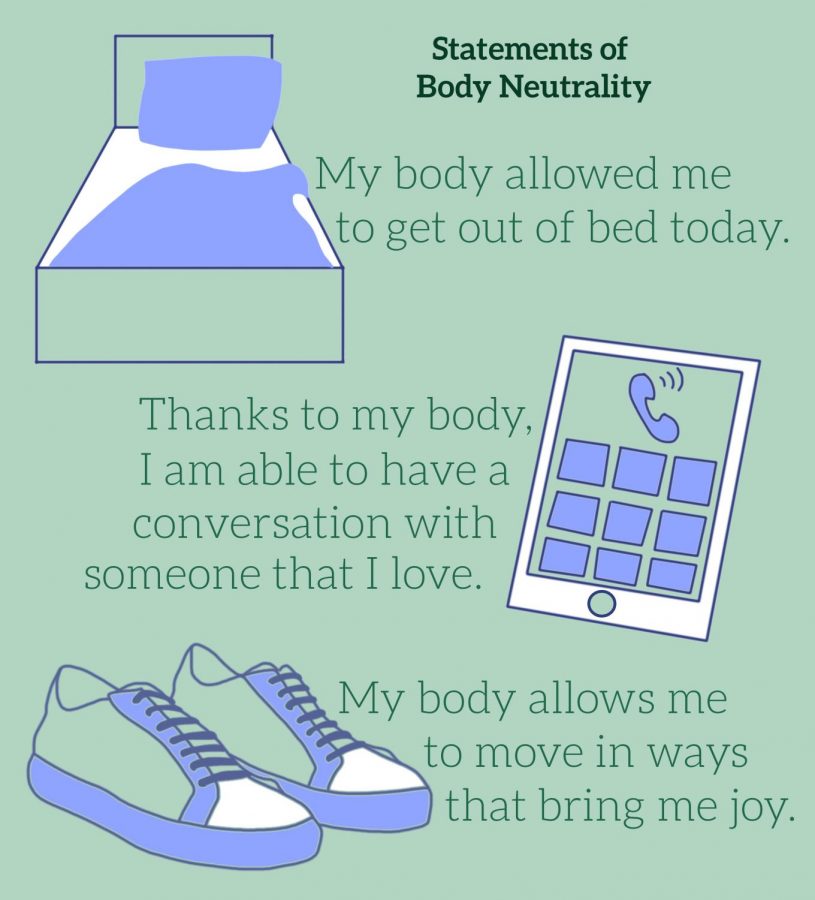 It’s just a normal Tuesday. You pass by a mirror on your way to your fourth Zoom meeting of the day when what you see stops you in your tracks. “Does my stomach really look like that?” you wonder as you unhappily fixate on the body part in question. It’s just a normal Tuesday, but, as you continue on your way to your desk, you’re left feeling a bit more unhappy, a little dissatisfied and a lot more insecure.

Sound familiar? You’re not alone. According to a 2017 survey by Psychology Today, unhappiness with body image is on the rise. Obviously, no one enjoys feeling uncomfortable in their own skin, and numerous social movements have arisen out of a desire to accept all body types as attractive. You’ve probably heard about the body positivity movement, but body neutrality, a comparatively new social movement, might not yet be on your radar.

Body neutrality focuses on appreciation for one’s body based on what it is able to accomplish.

On the other hand, the body positivity movement largely focuses on inclusivity of different bodies within mass media. It first entered the US in the ’60s as a means of raising public consciousness of social discrimination that fat people face and led to a reclaiming of the word “fat” as a simple adjective rather than an insult.

It morphed into a push to include people with larger bodies in widespread modeling campaigns, but it quickly drove people of color, people with disabilities and trans people to the background in favor of what author, activist and content creator Stephanie Yeboah calls “acceptably fat – size 16 and under, or white or very pretty.”

While body positivity has brought increased representation of different body types into the public sphere, what started as a movement for inclusivity became exclusive. Additionally, the tall order of loving one’s body all the time can seem daunting and downright impossible for many people struggling with body image.

That’s where body neutrality comes in.
If appreciation for one’s body occurs completely outside of the aesthetic realm, then bodies are no longer subject to ableist, racist and cisnormative ideas of beauty.
First noted online in 2015, body neutrality is a relatively new way of thinking about body acceptance — and it has nothing to do with appearance at all.

Instead of focusing on aesthetics, HuffPost defines the term as a simple acknowledgement of what one’s body does, such as its ability to talk, move or give someone a hug.

For example, body neutrality in practice may look like: “My body allowed me to get out of bed today,” or “Thanks to my body, I am able to have a conversation with someone that I love.”

Rather than thinking “I don’t like how my body looks so I’m going to exercise,” body neutrality advocates for thoughts along the lines of “My body allows me to move in ways that bring me joy.”

There are several benefits to thinking of one’s body in this way. For one, it’s pretty unrealistic to expect to love all of your body all of the time. For example, when a person striving for body acceptance gives in to negative thoughts about their body the feeling of failure can add an extra layer of guilt on top of the discomfort already felt.

Psychotherapist Alison Stone told HuffPost that this mindset offers a middle ground between the two strict binaries of either loving or hating your body.

The term has been getting a lot of buzz on social media recently, with the hashtag #bodyneutrality clocking in at almost 76,000 posts on Instagram alone. Celebrities such as Jameela Jamil and Taylor Swift have expressed support.

In an interview with Vogue, Lizzo spoke about her qualms with body positivity.

“It’s lazy for me to just say I’m body positive at this point. It’s easy. I would like to be body-normative. I want to normalize my body,” she said.

As body neutrality becomes more widespread, it seems to resonate with more and more people. Many have expressed that the idea feels more helpful to them than that of body positivity.

Grace Thomas, Fordham College at Lincoln Center ’23, has had long-term struggles with body image. She was recently introduced to the principle of body neutrality and said that she loves the fact that “it doesn’t focus on appearance.”

The need for body positivity comes from the constant talk of appearance and bodies, so I think that if we started with body neutrality, hopefully body positivity as something we need to enforce would become less necessary,” Thomas said.

“If I condensed all the time that I’ve spent wondering what I look like, I could probably just sit and write a novel or do something useful with my life,” Thomas said about the constant appearance-based rhetoric in society today.
Simply changing our terminology doesn’t actively dismantle systems of power that uphold body-based oppression, as body neutrality focuses mainly on changing the personal perceptions of bodies rather than large-scale changes to discrimination stemming from typical views of beauty. However, its recent popularity may speak to shifting cultural sentiments about what exactly is valuable about a body.
Body neutrality is much more inclusive of people with disabilities, people of color and gender-nonconforming or nonbinary individuals. If appreciation for one’s body occurs completely outside of the aesthetic realm, then bodies are no longer subject to ableist, racist and cisnormative ideas of beauty.

While the term is a step in the right direction, it isn’t perfect.

Simply changing our terminology doesn’t actively dismantle systems of power that uphold body-based oppression, as body neutrality focuses mainly on changing the personal perceptions of bodies rather than large-scale changes to discrimination stemming from typical views of beauty.

However, its recent popularity may speak to shifting cultural sentiments about what exactly is valuable about a body. Additionally, it can also still be a helpful mechanism to deal with negative effects of societal beauty standards.

While it’s certainly not a cure-all, for people trying to improve their relationship with their body, the idea of body neutrality might be a good place to start.