Stop Assuming My Gender Over Zoom

The struggles of online learning as a nonbinary student 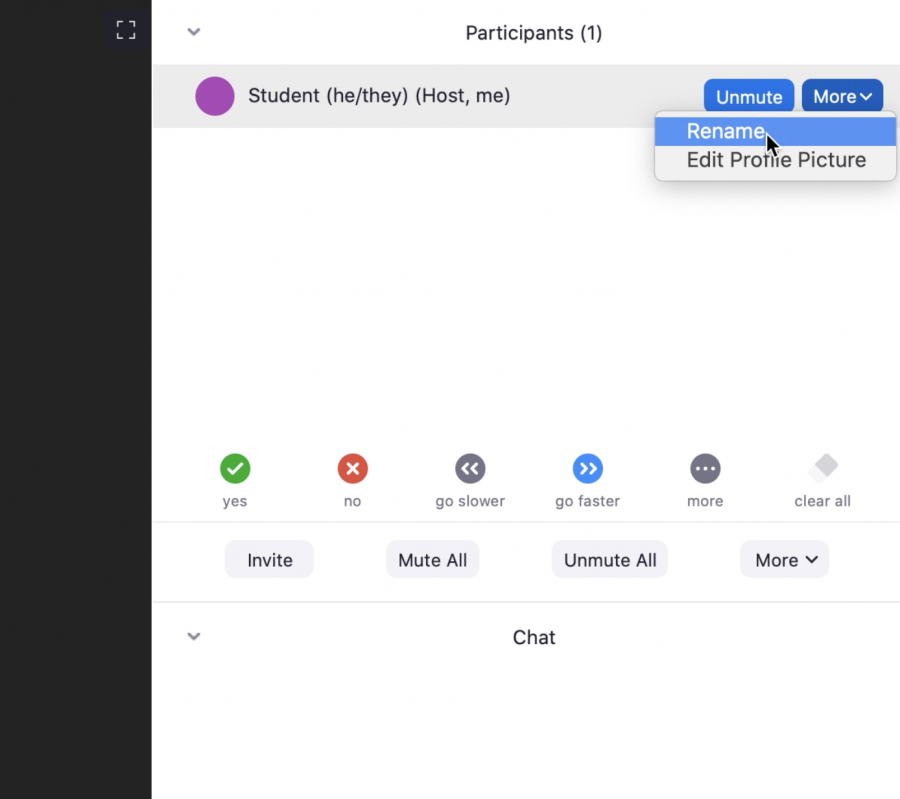 Publicly stating one's pronouns on Zoom is a simple way that students can show support for their transgender and non-binary students and help normalize the practice of displaying pronouns in the classroom long-term.

Over quarantine, I had a plethora of time to think, think and then think again. In my childhood bedroom, I thought about who I was and who I wanted to be. Eventually, right before the school year started, I came out as nonbinary.

It felt (and still does feel) freeing to be my true, authentic identity. But school was approaching rapidly, and even asking my closest friends to use my correct pronouns was scary, let alone a bunch of people I didn’t know over Zoom.

My transition didn’t include a name change, but it did include a whole new set of pronouns (they/them). In every class, my syllabus had the mandatory statement regarding the chosen name policy, but there was nothing about respecting pronouns.

To not explicitly see in the syllabus that my pronouns would be respected should have been a warning sign, but I still had hope.
I am getting misgendered in my classes almost every day.
Some professors made it a point to teach students how to add their pronouns on Zoom. When I saw professors doing this, I was hopeful that many students would participate. Sadly, that’s not the case.

In one of my classes, my trans friend, the professor and I are some of the only folks to do it. This raises my first problem.

It is not up to trans and queer students to lead the way in making our environments accessible. It is not easy to state your pronouns when your physical appearance does not match the societal standard of who people are. By adding pronouns to their Zoom names, cisgendered students can help set an example for their other peers and eventually help normalize pronoun displays in the classroom.

Cisgendered students need to do better — and that means standing in solidarity with their trans and queer peers. Easy ways for cisgendered students to make the classroom more inclusive is by simply putting their pronouns in their Zoom name and actively correcting those who misgender others in the class — all it takes is a private message on Zoom to make sure someone is aware of others’ pronouns.

The responsibility to respect others does not end at the cisgendered students. Professors need to be held accountable, too. At the beginning of the semester, I made it a point to slap my pronouns on every “getting to know you” syllabus assignment, even when the professor didn’t ask for it. In some cases, they did ask — but flash forward to now, and I am getting misgendered in my classes almost every day.

Professors, I ask you this, What happened? Where are your notes that state my pronouns? Where is your effort?

The solution is beyond simple: Professors need to print out the attendance sheet and write everyone’s pronouns and chosen names down, regardless if they are cisgender or transgender.

Again, it’s not up to the students to teach professors how to make their classrooms inclusive; that is simply a part of the prerequisite in being a professor.

I understand that times are changing rapidly, and professors who did not grow up in the same environment as students will have a harder time adapting to these changes. However, right now, the effort to be inclusive is not enough. As we all know, learning takes time and effort and there should be zero reason that professors and students alike came into this school year unaware of how to be inclusive in the classroom— all it takes is a Google search.
It is not up to trans and queer students to lead the way in making our environments accessible. It is not easy to state your pronouns when your physical appearance does not match the societal standard of who people are.
Zoom has become a place where it’s harder to confront issues seen in the classroom. For example, my science class taught us that the sex chromosome reveals a person’s gender and not their sex.

If I had been in person, maybe it would’ve been easier to say something to my professor, but instead, I sat in my room mulling over the words I just read. Being online and not having a physical connection with students and professors makes it scarier to say these things because there’s no telling their reaction.

Zoom has now become a platform where students and professors can freely assume someone’s gender instead of simply asking. Being online, folks can’t see how I express my gender, so they assume despite not having the facts.

Gender has no limits, and basing someone’s gender off what they look like is disrespectful. If you don’t know somebody’s pronouns, just ask them.

I urge cisgendered students and professors to put in the work. Learn about trans and nonbinary lives so you can be aware of these uncomfortable situations we are placed in. It is not up to trans and nonbinary students to keep ourselves safe; it’s up to the Fordham community to keep us safe.