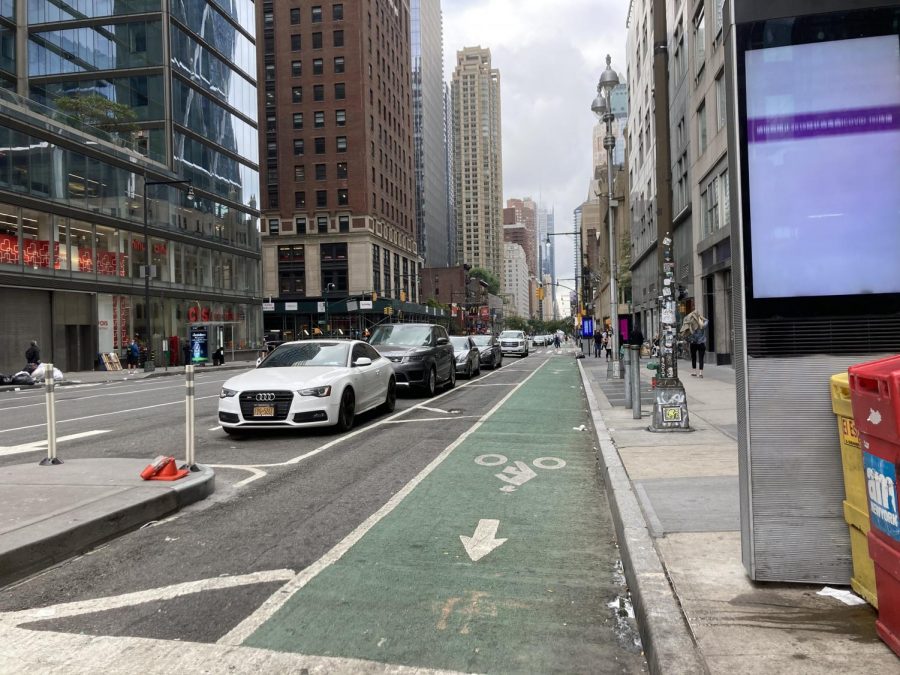 New York City needs to create more protected bike lanes, like the one pictured above, and to ticket bike lane obstructions in order for biking to be safe and accessible.

I love biking, especially to commute. Before the pandemic, I biked to campus frequently and I fondly remember riding a Citi Bike to high school to the other side of Manhattan with a friend, skirts and hair flying, making the beautiful trek across the 72nd Street Transverse.

There was only one problem: There aren’t any bike lanes on either side of Central Park, making the commute more dangerous than it had to be.

There is a dire need for protected bike lanes in New York City. These are lanes that have some sort of barrier between the car and the lane. It’s located next to the roadway but made distinct from the sidewalk. This is the best type of lane as it affords bikers safety from neighboring traffic. Barriers can include parked cars between the lane and the roadway, as seen on sections of Central Park West. According to People for Bikes, the main hesitation for people to get on their bikes is safety, and so these lanes are disproportionately the best way to get more people riding.
Why Bike Lanes Help the Climate and Save Money
In an age of increasing climate change, and the need for personal transportation because of the fear of COVID-19, it is imperative that all of New York City — not just Manhattan — increase the number of bike lanes, protected by both infrastructure and fines.

With climate change, there is a large incentive to reduce personal carbon emissions. In New York, the MTA provides an avenue for public transportation, reducing the number of cars in the city. Anyone who has ridden into a packed subway can testify that it is something that residents and tourists alike take advantage of.

However, being packed like sardines is not pleasant and in the times of the coronavirus, definitely not safe. When going out, people are reverting to driving or hailing cabs to avoid public transport, which greatly increases the amount of pollution generated per person.
This means that with the personal choice to use a bike we can use our privilege to both reduce our carbon footprint and help other New Yorkers.
Adding more bike lanes would create a greater incentive for people to cycle from point A to point B, as it might be faster than calling an Uber or Via, reduces the chance of getting the virus and is much cheaper.

Cycling to school or work is not a viable option for those less abled or who must travel a greater distance, but by getting people off the road and out of public transportation, we are creating a safer environment for them to commute traditionally. This means that with the personal choice to use a bike we can use our privilege to both reduce our carbon footprint and help other New Yorkers.

If it wasn’t so dangerous to bike in the city currently, it would be a cost-effective way to get around. No bike? An annual Citi Bike membership costs $175 a year. A person who purchases a $145 monthly pass from the MTA would save money in just 60 days of biking instead of taking the subway. I recommend having a normal card for rainy days, though.

A good bike and lock on Craigslist can cost about the same as two months of the MTA unlimited rides monthly pass. Additionally, the MTA is warning that they are raising prices, making these numbers even more dramatic. So, yes, biking is the most fiscally and socially responsible thing we can do.
How To Make Biking Safer
Since 2010, the number of unprotected and protected bike lanes have dramatically increased, especially in Manhattan. However, we don’t have nearly enough lanes to create a sustainable network where one can reliably expect to get from point A to point B using only bike lanes.

The adage “If you can drive in New York City, you can drive anywhere” is doubly true for bike riders who navigate fast traffic and reckless drivers. It isn’t fair to expect drivers and bicyclists to stay on the same pathways. Bikes cannot reach the speeds that cars do, and riders are vulnerable as they have no external protections like the body of a car — at most, they may have a helmet.

When lanes are not protected, riders are at risk of slamming into open car doors or traffic. Protected or not, we need to safeguard these lanes not only with barriers but also with legislation and fines.

Not everyone respects bike lanes; pedestrians and vehicles obstruct the lanes and place riders in danger of crashing or force them to go into traffic. Nine years ago, YouTuber Casey Neistat popularized the fight against lane obstructions. After receiving a ticket for not riding in a bike lane, he deliberately stayed in the bike lane, even at risk of potentially causing serious injury to himself.
The privilege to ride to work and to make a difference shouldn’t be determined by where in the city you live.
Unfortunately, this kind of violation still isn’t truly ticketed or taken seriously. Vehicles and construction crews can block the lanes, driving bike riders back onto the roadway. By discouraging blocking lanes, bike riders can have a safer experience and not worry about obstructions.

While an expenditure like this may not seem cost-effective, this is a public good that has numerous health and societal benefits. According to research on injury prevention in the Journal of the International Society for Child and Adolescent Injury Prevention, bike lanes “simultaneously address multiple public health problems” and “investments in bike lanes are more cost-effective than the majority of preventive approaches used today.”

Additionally, the study found that spending money on bike lanes in 2016 returned an increase of 10% in ridership. One can only imagine how that number would increase with the current need for personal transportation.

It is also important to acknowledge that there is a huge lack of Citi Bike stations as well as bike lanes in poorer areas of the city..

The privilege to ride to work and to make a difference shouldn’t be determined by where in the city you live. The roads in poorer areas, neglected and full of potholes, aren’t pleasant to drive on, let alone ride. We need a better network of lanes all across the city, allowing for all of us to make a change and stay protected.

New York City is behind on the times. This is a public good that truly is cost-effective for the city. The clock is ticking and people are more than willing to ride. All that we need are more lanes.