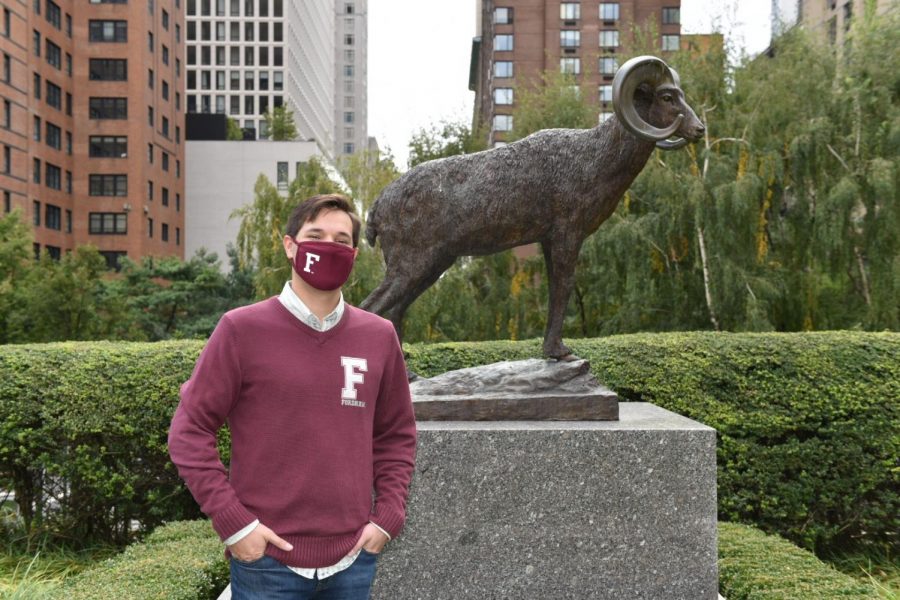 Loreen Ruiz and Robert Sundstrom are taking on the challenge of running the United Student Government from opposite sides of the country, as Sundstrom is on campus and Ruiz is at home in California. “With our enthusiasm and organization, I am looking forward to seeing what we accomplish this year,” Ruiz said.

By KATRINA LAMBERT and ALLIE STOFER

Robert Sundstrom, Fordham College at Lincoln Center (FCLC) ’22, has been elected the vice president of the United Student Government (USG) on Sept. 23, filling the position left vacant from the spring 2020 USG elections.

Sundstrom said that he received a call with the news from USG president, Loreen Ruiz, FCLC ’21, while doing homework.

“I was just ecstatic,” Sundstrom said about the win. “I think I told her how excited I was probably 25 times. I was thrilled.”

Aggarwal, who is new to USG, said that she decided to join because she feels as though there is a lack of contact between GSB and FCLC students. She said that her plans for the upcoming year are to be available to every GSB junior at Fordham and work to create events for all students.

“What I feel is kind of lacking at Fordham right now is representation of Gabelli School of Business more in USG council because I feel like Gabelli students are not very extracurricular driven just because of the accelerated pace of the curriculum,” Aggarwal said. “It would really help out everyone to just create more activities and events.”
“I intend on mending the gap between students and faculty, as well as the divide between GSB and FCLC students.” Brigida Caruso, GSB ’24
Brigida Caruso, GSB ’24; Djellza Pulatani, FCLC ’24; Bianca Georgescu, FCLC ’24; and Cort McElroy, FCLC ’24, were also elected as USG first-year senators for their respective schools.

“I intend on mending the gap between students and faculty, as well as the divide between GSB and FCLC students,” Caruso said. “This coming year, working alongside the facilities committee, I will focus my efforts in creating a more environmentally conscious student body and create more access to sustainable resources on campus for my peers.”

Both Pulatani and Georgescu said that they want to focus on making all students feel welcome.

“I intend to follow through with my 7-point campaign plan, wherein the needs and wants of students are met,” Pulatani said. “My main priority for this year is hearing out all student concerns and making sure Fordham Lincoln Center is a place where all students feel safe, welcomed, at home.”

Pulatani’s plan, which she outlined on her Instagram, includes amplifying student voices, raising awareness of social justice issues and keeping Fordham administration and students accountable for acts of discrimination, racism and sexual harassment. She will also focus on creating more sustainable dining options for students as well as work with nearby grocers to receive discounts for students. Her final focuses include creating COVID-19 support groups for students and working to create functional spaces on campus for all majors to use.

“I know this is a very unique first year experience, but I want to reassure the student body that USG will do everything to ameliorate the situation,” Georgescu said. “As for now, my top priority within USG is to work more on inclusion and create a platform where people  from every learning mode (online, hybrid or in person) feel welcomed and accepted.”

As a part of her campaign promise, Ruiz publicly released the election results to The Observer and on Instagram. Out of 245 votes cast, Sundstrom gained 147 votes for vice president, with opposing candidate Joe VanGostein, GSB ’22, gaining 97 votes. Two were write-in votes.

Sundstrom said that after Ruiz called him, he reached out to VanGostein to commend him on his campaign and thank him for pushing him during the election race.

“I think both of our campaigns pushed each other to be better and address more student needs. We both talked a little bit and are really excited to work together this semester,” Sundstrom said.

VanGostein will retain his position as secretary for USG and plans to continue his initiatives for combating racial injustice on campus along with the rest of the USG members.
“That was something we talked about on the phone yesterday; how excited we both are to really get things done.” Robert Sundstrom, FCLC ’22 and USG VP
“The cookie doesn’t always crumble the way you want it to in life but I’m still happy to be involved in USG as Secretary this year and I look forward to still pursuing my campaign objectives and helping Robert pursue his,” VanGostein said.

During his campaign, Sundstrom outlined the ways he hopes to increase inclusiveness and Fordham pride on campus. He said that he will expand his office hours and frequency of communication to Fordham students, as well as make the health resources Fordham provides to students more easily available. Sundstrom has also been meeting with various diversity groups and he hopes to promote these groups’ activities to a wider audience.

After the election, Sundstrom also said that he hopes to host joint events with the Commuting Students Association to make sure students feel as though they are still a part of campus. He said that he plans to do this through events open to all students such as virtual “Jeopardy!” which was held last semester.

Sundstrom also stated that he is very excited to work with Ruiz because they ran on similar platforms of inclusiveness and Fordham pride.

“That was something we talked about on the phone yesterday; how excited we both are to really get things done and enhance the attitude towards United Student Government at Lincoln Center and really get done what we promised to do,” Sundstrom said.

Ruiz said she is looking forward to working with Sundstrom this year.

“With our enthusiasm and organization, I am looking forward to seeing what we accomplish this year,” she said. “Despite the circumstances, I am confident that we will be able to serve and engage the Fordham community. Both Robert and Joe are excellent people and I am glad to have them on USG!”