A 10-Block Walk for Change 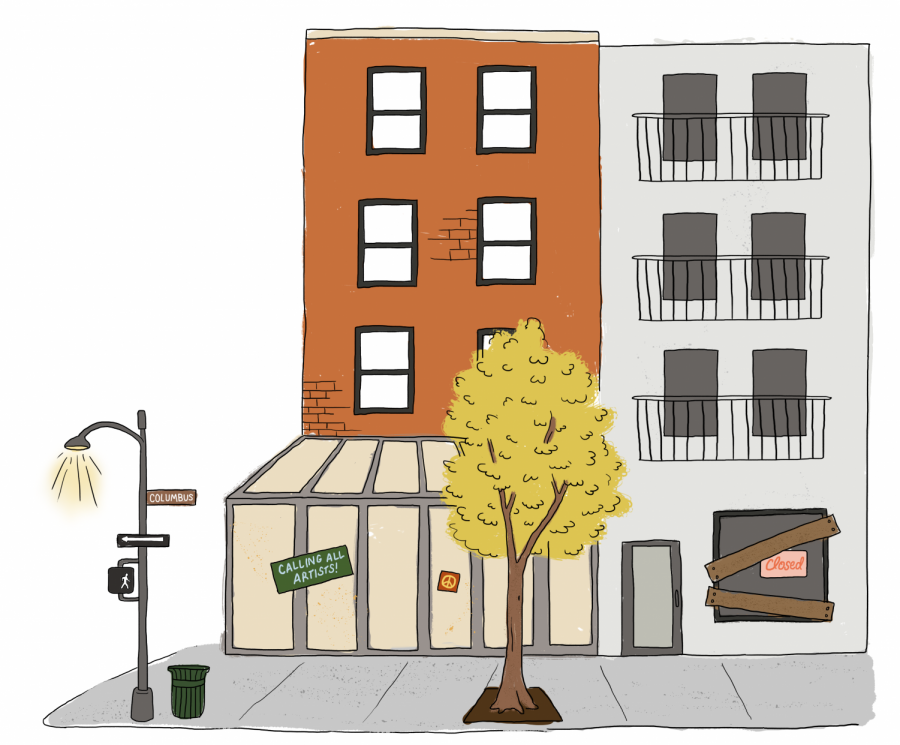 “Closed” signs abound in stores that used to be centers of activity. As the city witnessed the closure of businesses, its streets became eerily static. In response, a local art initiative strives to utilize the space of vacant storefronts to display artwork, and in doing so instill a sense of renewed confidence and hope in the Upper West Side.

Starting Oct. 26, the project, called “Art on the Ave,” aims to offer pedestrians a free, 10-block, physically distanced gallery walk from West 67th to 77th Streets along Columbus Avenue. The open gallery will exhibit artwork made by artists from underrepresented communities in the art world.

By utilizing street space in this manner, the project aims to showcase material in a way that is directly accessible to pedestrians of all backgrounds, most of whom may not be expecting to encounter an exhibition while walking down the street. The highly localized exhibition will feature artwork in an environment closer to the street and will need to be understood in relation to the context of a NYC neighborhood. For one, the gallery in the street will not rely on the architectural demands of a conventional museum, will not require an admissions fee, will be open at all times and, most importantly, will attempt to bridge the gap between the art space and the civil space. The new sense of openness will also prove refreshing.

Professor Stephan Apicella-Hitchcock, programmer for the Ildiko Butler Gallery, endorsed the concept of a street gallery by explaining, “Art can read as more accessible and integrate into our everyday world when removed from a museum or gallery context, and uniting the often rarefied world of high culture with our ordinary trip to the store to buy groceries can produce a significant impact.” In this sense, the exhibit will ideally be able to influence what takes place on the street and will be able to generate real, positive change in the community. An exhibit of this kind proves especially valuable when it comes to providing an opportunity to think about others and to be sensitive to them at a time when social distancing keeps people away from one another physically, psychologically and emotionally.

The exhibit and its effects, however, will certainly be temporary. Associate professor of visual arts Mark Street celebrates the idea: “I’m excited about any initiative to restore life to those spaces.” However, he warns that the initiative alone, albeit exciting, does not seem to add up for lasting or systemic change. “What I’d like to see long term,” Street explained, “is real support for exhibition spaces, rent control for cultural institutions, and nuts-and-bolts support for working artists (including rent controlled studios like at Westbeth).” Art on the Ave will hopefully open avenues for investigating the role of art in our current circumstances and prompt further, more concrete action.

The notion of having art facing the street implies getting a message out, making the invisible visible and engaging the viewer when they are in a non-artistic environment — in essence, advocating for an art that is committed to social life in its ubiquitous dimension.
“Art can read as more accessible and integrate into our everyday world when removed from a museum or gallery context, and uniting the often rarefied world of high culture with our ordinary trip to the store to buy groceries can produce a significant impact.” Stephan Apicella-Hitchcock, programmer for the Ildiko Butler Gallery
The guidelines for submission indicate that the artists need to “be guided by the notions of perspective, healing, and telling a new story” and that the artwork should reflect values of inclusivity, empathy, equity, growth, action and activism. According to the project’s website, the show will include an online guide with information about each piece of art and the artists’ bios.

In terms of technical requirements, the artwork needs to be two-dimensional, no larger than 36 x 60 inches and valued at up to $5,000. The deadline for submission is Sept. 30 by midnight. All applications must include a 500-word artist statement, an artist bio, a resume and an image of the artwork. More information can be obtained from the project’s website, artontheavenyc.com.

Once up, the exhibition will last for three months, a timespan within which it will not just liven up storefronts but also generate meaningful discussion. The exhibit will hopefully give way to the beginning of a healing process in the community.