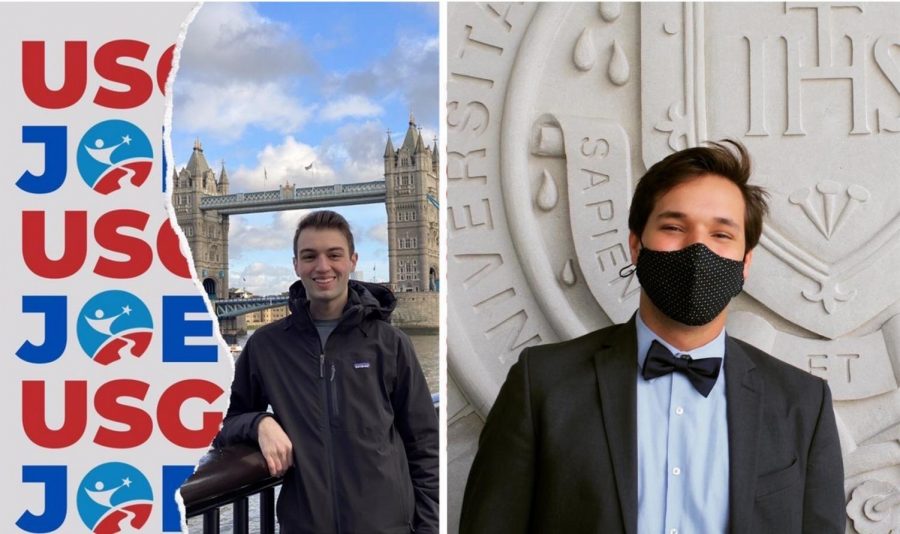 Joe VanGostein and Robert Sundstrom share some common goals, like improving racial inclusion initiatives and increasing Fordham pride, but each shares what makes his campaign unique.

Nearly a month into the academic year, the United Student Government (USG) is holding elections to fill vacant positions. The election is mainly made up of students running for class senator positions, but students will also vote on the next vice president of USG.
Joe VanGostein
In order to plan events, you need a big platform in order to reach people. I think, through my USG and Gabelli Joe persona, I’m in the best position to do that. Joe VanGostein
One candidate is Joe VanGostein, Gabelli School of Business at Lincoln Center ’22, who is better known by his Instagram handle @USGJoe. VanGostein explained that his Instagram name developed when he was running for freshman senator; at that time, it was @GabelliJoe.

“People knew Gabelli Joe, but they didn’t know me,” VanGostein said. “People had preconceptions about it, and it really became my identity my first semester of college.”

VanGostein is not only well-known because of his Instagram account, but also for the many positions he has held through USG. He began as a freshman Gabelli senator and continued to become a sophomore senator. VanGostein also worked on the Student Affairs Committee, as well as the Student Activities Budget Committee (SABC). For the fall 2020 semester, he was elected as the current secretary of USG.

In the upcoming election, VanGostein believes that his Instagram platform and experience will help him if he were to get elected.

“The official role of the VP is only to plan events. In order to plan events, you need a big platform in order to reach people. I think, through my USG and Gabelli Joe persona, I’m in the best position to do that,” VanGostein said.

As I’ve always said, this campaign is about YOU, not me, so today I reached out to see what you all want from this candidacy. I was blown away by the feedback and passion I received. Here are some of the biggest issues we will definitely be tackling if I’m elected!

VanGostein explained that when it came to identifying problems within the Fordham community, he direct-messaged over 2,000 people on Instagram to get their input. Through this, he came up with four main problems to focus on.

The most recurring issue VanGostein found was racial justice. He, along with current USG President Loreen Ruiz, Fordham College at Lincoln Center (FCLC) ’21 and other USG members, has been meeting with Public Safety to discuss new bias training for public safety officers.

VanGostein said he has also been working on the Start With Us initiative, which focuses on educating students. He said that he and Ruiz have been contacting student leaders and student organizations with the goal of restructuring the way the organizations work to try and eliminate microaggressions.

Tying in with racial justice, he also is working on having Fordham divest itself from Aramark for its racial offenses and involvement in providing inadequate food to private prisons.

Another one of VanGostein’s goals is sustainability. VanGostein wants to get rid of single-use plastics and stop Fordham from selling FairLife products.

The coronavirus pandemic was another issue that students frequently mentioned. According to VanGostein, many students have voiced their struggles with reporting people who do not follow the safety protocols. He is currently working with Public Safety to create an easier way for students to report transgressions, as well as trying to make Public Safety’s hotline number more well-known.

VanGostein’s final focus would be on Fordham pride, especially with students attending events via Zoom. He wants to work on creating more engaging virtual events. VanGostein said that while he understands that Fordham students do not typically have much school spirit, he wants to nurture a strong virtual community during this time.

He ended by stating that no matter what the outcome of the election is, he hopes students will still reach out to him.

“USG is very important to me, and even if I lose, I’m not going to quit. So if there are things you want to see happen at Fordham, please reach out to me,” VanGostein said.
Robert Sundstrom
I want to be cognizant of the movement we are a part of right now, so I want to make sure Fordham is becoming the most inclusive and diverse campus it can be. Robert Sundstrom
Robert Sundstrom, FCLC ’22, is running against VanGostein. He also was a voting member of the SABC last year and is currently serving as a junior class senator. Sundstrom has been involved with USG since his freshman year, when he was a general member. In his sophomore year, he started working as the chair of facilities, where he worked to extend dining hall hours and increase how often feminine products were restocked in the bathrooms.

Sundstrom said he would keep events such as Fordham Fridays; however, he wants to make sure that Fordham is a place that students can be proud of. He explained that this would mean making sure that Fordham is able to address issues and challenges that face students. Sundstrom also said that he wants to be the most responsive vice president in recent history by expanding office hours and increasing communication.

“I want to be cognizant of the movement we are a part of right now, so I want to make sure Fordham is becoming the most inclusive and diverse campus it can be,” Sundstrom said. “I think we already have a lot of diversity, which I love, at Lincoln Center, but I think too often it can be tokenized or pushed to the side.”

While creating his platform, Sundstrom sent out a Google Form for students to fill out to help decide the issues he would focus on. He has been promoting it through his own Instagram and through friends, and he has received 25 responses so far.

Sundstrom stated that the first issue that has become apparent to him is the need for clearer information regarding the coronavirus safety protocols and testing on campus. He said that if he is elected, his first act will be to speak with Dean of Students Keith Eldredge and discuss how to make testing more accessible.

Sundstrom also met with the Feminist Alliance to discuss the issues that are important to them. If elected, he wants to focus on improving sexual health awareness on campus so that students have the resources they need to stay safe.

Sundstrom also emphasized that USG is for all students, and one of his goals is to improve their visibility on campus so that all students can feel like a member of USG.

When asked why people should vote for him, Sundstrom named three reasons: his experience, drive and collaborative platform.

“My platform is not my platform alone; it’s our platform,” Sundstrom said.

The election will open on Sept. 22. Students will be notified when ballots are released and will be able to vote until 5 p.m. ET on Sept. 23.

A previous version of this article omitted some of the USG members in discussion with Public Safety, as well as Sundstrom’s first position on USG. It has been updated to reflect the correct information.