Why We Love the Apocalypse

Thoughts from a climate nihilist on the California wildfires 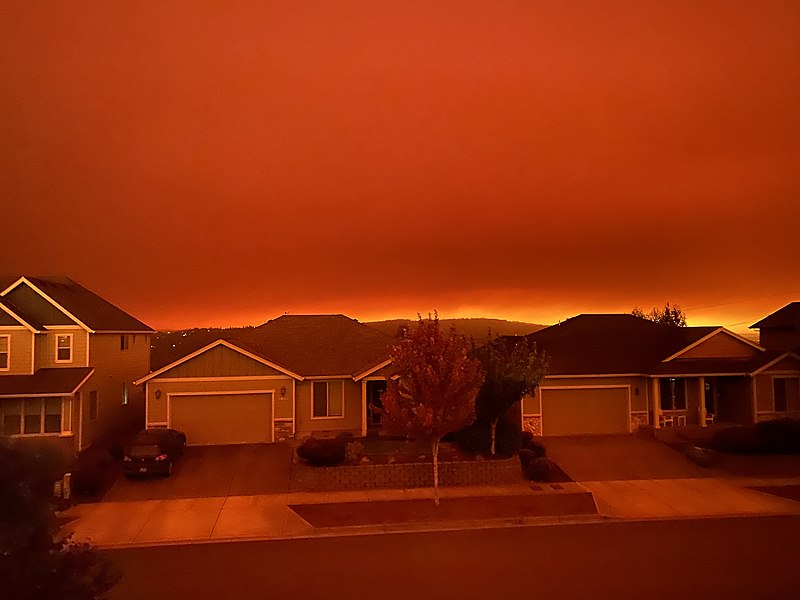 The sky in Salem, Oregon, on Sept. 8. The wildfires there, as well as in California and Washington, have further heightened discussions about implementing climate change policy.

It is Wednesday, and California is on fire.

I sit here and wish it were more surprising for me — skies the color of blood, thousands evacuated from their homes amid a pandemic. But it’s not. The news is there on my phone for me to vacuously consume one moment and disregard the next. I think that after looking at the photos, I ordered a coffee from Starbucks. I don’t really remember because the moment dissipated so quickly.

Like my entire generation, I have lived my whole life waiting for climate change. But there’s only so long you can bear to think about the apocalypse. I sink into the anxiety of climate change and float right out of it because looking at the way the world is changing is like looking into the sun.

It’s 2 a.m. and I’m looking at the photos again, and this time I can almost taste the ash. Apathy turns to disgust as I realize I am able to synthesize record-breaking wildfires and hurricanes into a normal part of my day the same way I do a cup of coffee.
We live in a world where we’ve already forgotten that our president was impeached this year and we give out hand sanitizer as a wedding favor and we order coffees while California is on fire. And it’s almost a relief now, because the sharp cuts of disaster seem easier to bear than the ropes of tension that curl up waiting for one.
I sit at 2 a.m. and I think about why my mother calls me a bad environmentalist.

The truth is I am a bad environmentalist for a simple reason: I am a climate nihilist, and I am ready for the apocalypse. I don’t think that climate change can be prevented or that the world can be saved because climate change is already here.

California is on fire. Fiji is sinking. Greenland’s ice sheets have passed the point of no return. We are frogs in a boiling pot of water, but we as a society refuse to acknowledge this. Why?

Our discussions around climate change revolve around saving the earth, of the individual actions we can take that — combined — will come to our rescue before any actual damage can be done. Real climate change is a can we kick down the road, always something that is there to prevent or that is lying in wait for a future generation.

This is a fantasy. Climate change is not coming. It’s not going, either. It’s here.

Our reusable water bottles and bags and straws won’t save us. The notion that individual action can save us from our climate catastrophe becomes ridiculous the first moment you think about it, a cotton candy vision that disintegrates on your tongue.

According to a 2016 report from the United Nations Environment Programme (before the United States dropped out), even if all pledges from the 2015 Paris Agreement are implemented, we will still see temperatures rise by 2.9-3.4 C above pre-industrial levels by 2030, far above the compact’s goal of 2 C.

If you listen to the Union of Concerned Scientists, addressing climate change is a question of magnitude, not prevention. The National Aeronautics and Space Administration reports that even if we ceased all carbon emissions today, Earth’s warming would continue for decades, if not centuries.

This is not to say that we should do nothing, or that I am calling for us to give up. Real, meaningful change can occur in our lifetimes to mitigate and buffer the desolation of climate change. Rather than hand-wringing or staving off the truth by running up the clock with increasingly grandiose visions, we need to have conversations about adaptation.

About resiliency. About what it’s going to look like to live in a hotter and more disaster-prone world. About how we can reorganize our society to cause actors — primarily corporate — to internalize the true costs of their actions, rather than the centuries-old status quo of passing it on to the next (poorer, less white) person.

About what our world is going to look like with California in ashes and Fiji sunk and Greenland’s ice sheets gone and we can’t look away any longer.

Climate change is not just an issue of our generation — it is the issue.

And this is why we love the apocalypse. We love the apocalypse because it means that the crisis is here and we don’t have to wait for it any longer. Millions like me have pored over the pictures of orange skies and dispossessed communities, horrified at what we see but unable to look away because we can finally lock eyes with the beast that has loomed so long over us. We say that it’s not the fall that kills us, but the sudden stop at the end. That’s not true at all.

It is the fall that kills us, every time.

We live in a world where we’ve already forgotten that our president was impeached this year and we give out hand sanitizer as a wedding favor and we order coffees while California is on fire. And it’s almost a relief now, because the sharp cuts of disaster seem easier to bear than the ropes of tension that curl up waiting for one.

Get up, move up or grow up — these are our choices. A new reality is here, and it doesn’t care about your feelings.

Are you willing to own up to it?