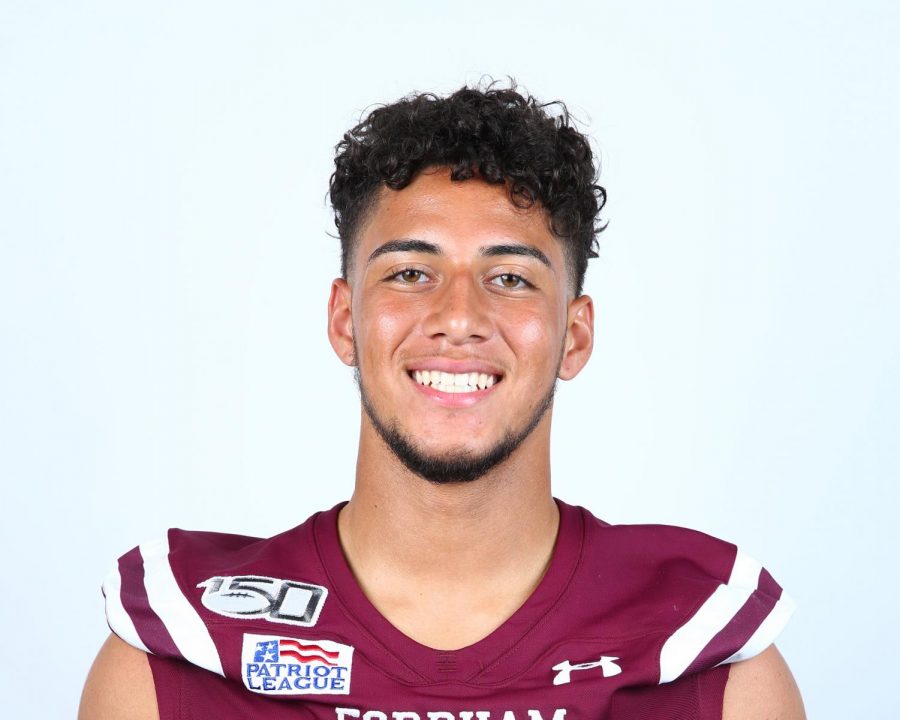 Jaden Vazquez, Fordham College at Rose Hill (FCRH) ’22, has always known that he was bisexual. He’s also played football his entire childhood. A year ago, he uploaded an Instagram post where he physically stepped out of the closet to his followers. Now, as a linebacker on Fordham’s football team, his experience as an LGBTQ+ student athlete is attracting national media attention.

“It’s obviously a part of me, but it’s not all of me,” Vazquez said in reference to his sexuality. “I didn’t want to be known as the bisexual athlete.”

However, Vazquez’s story is uncommon: While visibility for the LGBTQ+ community has increased in recent years, LGBTQ+ athletes are still incredibly underrepresented across all sports. Human Rights Campaign reported in 2018 that 80% of LGBQ teenage athletes have not come out to their coaches.

This is likely due to the fact that, on top of normal stressors associated with being LGBTQ+ in a heteronormative society,  LGBTQ+ athletes face a number of challenges unique to the sports world. The NCAA Sport Science Institute reports that, within college athletics, “coaches, administrators and student-athletes often exhibit heterosexist and homophobic attitudes.”

Vazquez noted that he had heard numerous microaggressions from members of the football team that contributed stress to the already intensely anxious experience of coming out.

“I don’t think anyone on my team is homophobic, but hearing gay jokes or hearing homophobic tendencies in conversation would just eat at me. I wanted to say something but I didn’t want to out myself,” Vazquez said.

Gay jokes and traditional ideas of masculinity were also noted in the Human Rights Campaign report as factors that add to difficulties LGBQ athletes face.
When I say ‘LGBTQ’ in front of some people, I can feel them tense up like it’s a subject that (they think) maybe we shouldn’t talk about it in the locker room or on the field. I think it should be normalized. Jaden Vazquez, FCRH ’22
In terms of the broader culture within Fordham Athletics, Vazquez described conversations surrounding the LGBTQ+ community as a “taboo subject.”

“It’s something that’s not brought up, and even when I say ‘LGBTQ’ in front of some people, I can feel them tense up like it’s a subject that (they think) maybe we shouldn’t talk about it in the locker room or on the field. I think it should be normalized and I think the only way to normalize it is to continue talking about it.”

Coming out via Instagram was a deliberate move. Vazquez explained that coming out online felt almost less public, and it made him more comfortable to come out to everyone at the same time.

“That’s a lot of conversations I would have been having (otherwise),” Vazquez said. “I found it easier within myself to make the post than to sit people down because that’s a more formal way to do it. I wanted to come across as casual.”

The timing of this post was significant as well. He considered coming out his freshman year or even earlier but wanted people to get to know him first, saying, “If I would’ve come out before I came to college, I would’ve been known as bisexual instead of as Jaden first.”

Vazquez also recalled that, when he began thinking about coming out, there weren’t many people within athletics to look up to in terms of his sexuality. He remembered seeing a handful of athletes coming out in the past, and said that “even just reading about them helped. I wish there were more.”

He plans to provide support and resources for other LGBTQ+ athletes with his new position in the student-athlete organization Fordham Connect. According to its Twitter, Fordham Connect’s mission is to “erase the stigma around vulnerability in sport.”

In addition to its larger focus on student-athletes’ mental health, the organization is broken down into three subgroups: female; Black, Indigenous and people of color; and LGBTQ+ athletes. Vazquez serves as the executive of the LGBTQ+ athlete subgroup. Fordham Connect is currently in developmental stages and is undergoing group training in order to best provide a safe and welcoming space for athletes to receive support.

Vazquez has a vision for his subgroup: “I want to focus a lot on self-identity and realizing that you are more than an athlete, that it’s okay to be yourself.”

He also wants people who don’t identify as LGBTQ+ to come to meetings to discover more about themselves. He believes they should be able to “find out who they are as people and how they don’t have to play into the roles of society.” Vazquez explained, “Even cis males go through needing to feel like they’re more of a ‘manly man’ because they’re in the sport of football or basketball or soccer.” His group aims to alleviate these pressures.
If I would’ve come out before I came to college, I would’ve been known as bisexual instead of as Jaden first. Jaden Vazquez, FCRH ’22
Discussion will play a large role in these early steps. “Hearing other people’s stories definitely helps a lot. There’s obviously these societal roles on you, but you can be yourself through whatever identity you choose.”

Vazquez said that Fordham Connect has received support from the Fordham administration and athletes on several different sports teams. The subgroup he runs has already started to open up conversations about LGBTQ+ inclusivity in sports, and conditions have improved since his freshman year. “Everyone’s open, and if they’re not open, they don’t share.”

With the football season suspended for the fall, Vazquez has spent a lot of time preparing for the organization’s first meeting, which is scheduled for Sept. 16. In addition to speaking with several news outlets, he has been in contact with the NCAA about how best to provide support and resources for his community. Vazquez will also be on a College Sports Information Directors of America (CoSIDA) panel about LGBTQ+ inclusion in sports on Sept. 29. He’s made connections with Outsports and coaches throughout the NCAA and plans to reach out to other LGBTQ+ college athletes.

“This time last year, I was in the closet. Now, I’m just trying to help people in my same situation. If I don’t, I feel like it’s just selfish. There’s not a lot of us, so we definitely have to look out for each other. This doesn’t just stop at Fordham.”