The statement calls for the appointment of a new program head, a ‘radically inclusive’ application and removal of bias from theatre curriculum 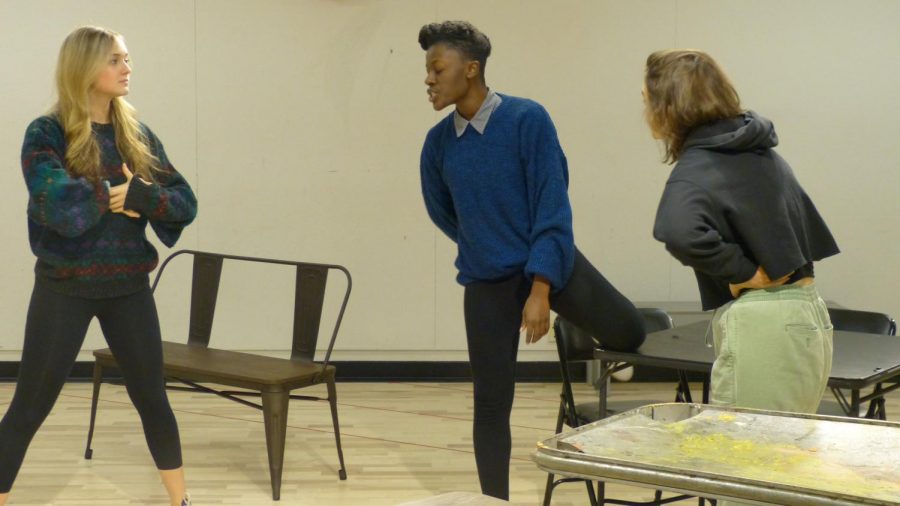 Students rehearse "Twelfth Night" in October 2019. The show was mentioned in the student demands for Fordham Theatre as a positive example of diverse casting.

By JOE KOTTKE and VICKY CARMENATE

“Our experiences as students of color have been significantly different than our white counterparts,” the students wrote in their list of demands. “We feel mocked, judged, minimized, and patronized in and out of the classroom. We attribute this to the lack of support and education within the Fordham Theatre curriculum and the overemphasis on perpetuating age-old injustices.”

The students who organized the demands were Amara McNeil, Fordham College at Lincoln Center (FCLC) ’23; Will Adams, FCLC ’22; and Claire Talbott, FCLC ’21. The three students also serve as the chairs of the Black, Indigenous and people of color (BIPOC) Theatre Alliance of Fordham, a group of over 30 students.

The document details 10 key demands for the theatre program to fulfill while also acknowledging demands that have already been met — including equity, diversity and inclusion (EDI) training for the faculty, implementation of equitable hiring practices and commitment to invest in outreach to communities of color for applicants.

The first demand asks for the appointment of a new head of the program to be a priority.

After allegations of sexual misconduct and racial exclusion, the former head, Maguire, was replaced by Interim Head Stefanie Bubnis. “She can’t make any lasting change because she is not the permanent head,” McNeil said. “We cannot change the culture of the theatre program without having someone dedicated to that change in charge of it.”

In July, a call for Maguire’s resignation gained over 100 signatures from students, alumni and parents. The open letter attributed accusations of Maguire on the Instagram accounts @blackatfordham and @letstalkaboutitfordham as a reason for his dismissal from teaching: “They (the Instagram accounts) present detailed accounts of racist, misogynistic, predatory, rude, and otherwise bigoted behavior committed by Maguire over the course of his decades-long tenure.”

In a Loom video response to the call for resignation, Professor Chad McArver called the students’ letter a “violent challenge.” “Our silence may well have been taken as inaction and we apologize for not making an official public statement sooner. It was certainly not our intention to perpetuate and further hurt,” he said.

According to Talbott, the fourth demand is to dismantle oppression and bias within the department’s curriculum, including the two-semester required course for freshmen called Collaboration.

She said there is a distinction between an emotionally charged and an emotionally unsafe atmosphere when it comes to acting classes. “Having anti-racist and anti-bias training involved in the collaboration process will create a safer space for theatre students, especially given the nature of theatre work, which can often be very triggering. Knowing where people are hurting will create a safer space for everyone,” Talbott said.

Demands five and six cover the creation of a “radically inclusive” application and dedication of scholarships to BIPOC individuals, which now include few options — such as the Denzel Chair Scholarship.

Reformations to casting and programming for the mainstage show is another demand. “There are a lot of students with more complex racial identities than being ‘just Asian’ or ‘just Black,’” Adams said. He explained that in the past, the theatre department asked a mixed-race student to play a role intended for a Black actor.

The eighth demand asked to officialize the Diversity Committee and to pay or compensate students who are completing their EDI work. “We, as students who pay $80,000 a year, should not be telling the faculty what to do. I don’t want to know more than my faculty does,” Talbott said.

The final demand requests a theatre-specific counselor and an intimacy counselor. According to Talbott, Fordham’s Counseling and Psychological Services does not have the “bandwidth” to meet theatre students’ needs.

Adams compared the need for an intimacy counselor to the need for a member of the faculty to be present for fight choreography “to make sure that no one gets real-stabbed with a fake sword.

“An intimacy coordinator would make sure that no one gets real sexually harassed in their scene,” Adams added.

Christian Caro, FCLC ’23, is a theatre student but did not take part in compiling the demands. “(M)y experience of being a POC in the program has been very different from everyone else in that community. I have never felt tokenized or disrespected very much at all. Regardless, I think that this is an extremely important statement,” Caro said.

Caro said the plethora of requests “could be difficult to meet all at once, but change doesn’t happen overnight.”

“I want Fordham Theatre and Fordham University to know from this point on that any harm that happens to students is 150% their fault,” McNeil said. “They can no longer say that ‘we didn’t know’ or that ‘this is new information…’ We are doing nothing but telling them.”