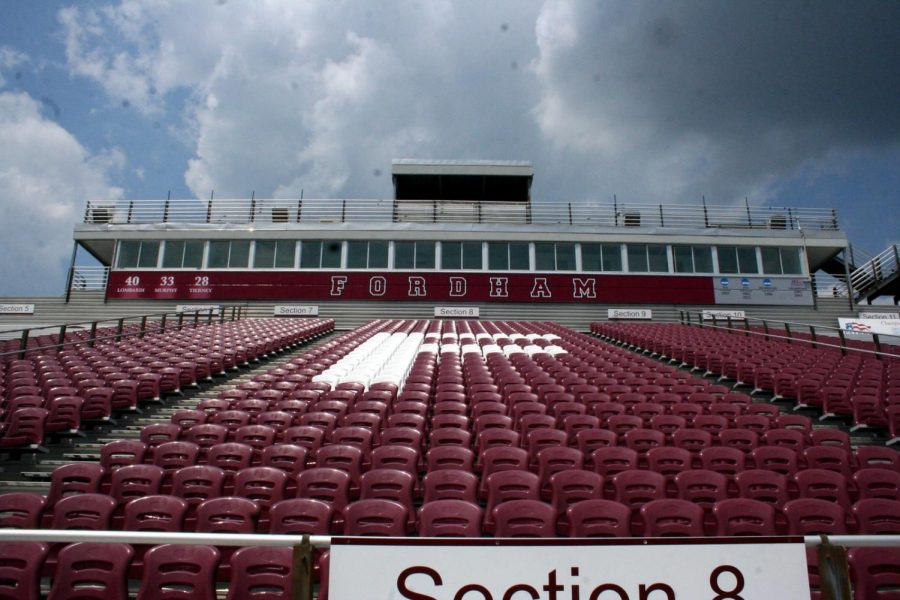 The suspension of all athletic competition this semester has dashed the aspirations of student-athletes and Rams fans alike.

On July 17, the Atlantic 10 Conference announced that it was suspending all fall sports seasons for the 2020-21 academic school year in wake of the ongoing coronavirus pandemic. This decision will affect thousands of student-athletes around the country, including 15 athletic teams at Fordham. In the week since, the players on these teams have had to come to terms with the reality  of losing the opportunity to play.

Rowing team member Debra Chieco, Fordham College at Rose Hill (FCRH) ’22, recognized that the postponement was necessary, but also admitted that “It still hurts, though. As a student-athlete, it’s not just the races and regattas that make your season worth it. It’s every morning practice, team meeting, lift session and extra workout with your friends that become so entwined with your individual Fordham experience.”

Chieco said that the plan in place for rowing to continue in the future is tenuous at best. While the sport doesn’t include proximity between boats in competition, it’s a team sport, which means that teammates must work within extremely close quarters to even practice. Protocols and safety standards are still being developed, but it’s very difficult to conceive of a plan that allows them to safely compete or practice freely.

Chieco has been rowing for Fordham for two years, and in that time, said she has found some of her closest friends.

However, for incoming freshmen like swimmer Ryan Davidoff, FCRH ’24, settling into student-athlete life and making friends on his team will take more time now.

Davidoff considers himself fortunate because he does feel somewhat welcome, citing “numerous Zoom meetings where we have been introduced to the team as well as added into team group chats. The captains truly have done an excellent job of helping us get assimilated into the team and culture.”

However, in Chieco’s case, truly bonding with her rowing team took hours of practice, team exercise and competition. Team leaders will make their best attempts to make new players a part of the team, but they can only do so much without a schedule. Davidoff still remains optimistic that the team will compete in the spring.

The young swimmer expresses hope like so many other athletes, but in reality, there is no concrete plan for rescheduling at the moment. There have been discussions of moving competition to the spring and/or shortening the season. In the case that fall athletic competition is canceled altogether, a universal redshirt year, where athletes are eligible for an extra season, may become a possibility. All of the spring athletes were extended this offer after spring 2020 sports were canceled.

On a shortened spring season, Dandridge said, “That’s kind of a tough situation to be in, because you’re using your year of eligibility on eight games versus 20 plus. You want to play, but you also don’t want to miss out on all those games.” She even said that she would consider a gap semester to prevent this scenario.

In a way, the women’s soccer player prefers if the season were just canceled, which would present her with a fifth year at Fordham.

When asked if she would return to Fordham for another year, Dandridge replied, “Oh, for sure. I would 100% take it, just because I would want another season. I don’t know what that looks like academically yet … but I would definitely stay for a fifth year, or fourth season, at Fordham. Being in this quarantine and not being able to do anything, I’ve really come to realize how much I appreciate the game and how much I love it.”

Obviously, different solutions will appeal to different players. In Dandridge’s case, she wants to pursue graduate school, so a fifth year would be preferable. For other students, a shortened schedule this year wouldn’t be ideal, but it would be better than nothing at all.

While every player was disappointed that they wouldn’t be playing, all of them were quick to recognize the importance of canceling the season. Chieco put it best, saying, “As far as Fordham as a whole goes, this is a team effort that extends far beyond rowing, athletics as a whole, or any one college. Do your part. Protect your peers. Wear a mask.”

However, beyond a dedication to public health, the one common tie between these players is the determination they’ve demonstrated in the face of these confusing and unforgiving events.

Despite not knowing any of his teammates or when his college swimming career will begin, Davidoff said, “Although it’s challenging, I am very determined to stay in shape and to contribute to the swim team’s overall goal of a good showing at the conference championships.”

Dandridge recognized her coaches for accommodating her and her teammates in an uncertain time and said, “This is the first time I haven’t played fall soccer since I was five. I’m just trying to stay motivated and continue to work out, because every little effort still matters, because we’ll be revisiting the season at some point.”

Chieco has the utmost faith that the rowing team is up to this new challenge, saying, “When we get to race again … you’re going to see that we will have succeeded despite the circumstances, not failed or slacked off because of them. It’s a tough situation, but Fordham Rowing is tough as hell.”

The situation to which Chieco is referring is indeed a foreign one to Fordham athletics and all of the students the institution represents. Plans going forward are still uncertain, and it’s unlikely that the entire matter is settled any time soon. This puts many players in a difficult position, but they’re clearly not letting it get to them. They’re disappointed and nervous, but it seems that there’s very little that could possibly rob them of their perseverance in the face of long odds. If anything, this will only strengthen their resolve as Rams.