‘Palm Springs’ Under the Stars 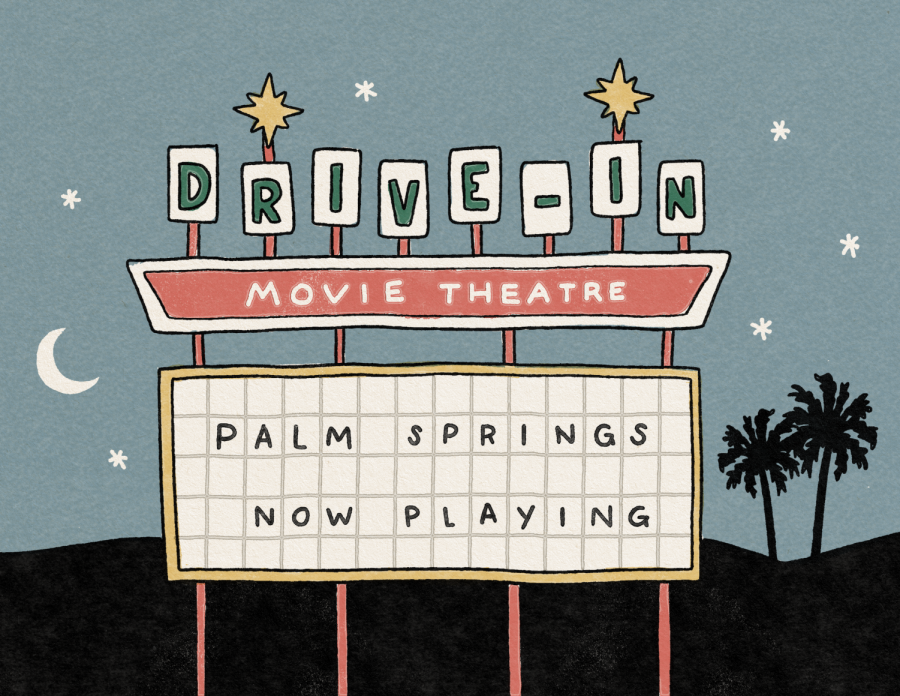 With the majority of Americans struggling to pass the time during the pandemic, it comes as no surprise that most people have begun to amuse themselves through passé forms of entertainment. Drive-in theaters, once considered an American pastime, are no different, as their resurgence in popularity has led many to believe that, despite theaters being closed, moviegoing is still as relevant as it ever was. Even with state legislatures strongly encouraging people to avoid large gatherings, the demand for something that doesn’t involve staying indoors is simply too high to ignore. Outdoor screens are not only being projected with recent Hollywood hits and cult favorites from the 1980s and ’90s, but new releases that would have otherwise only gone straight to digital platforms.

Such is the case with Max Barbakow’s “Palm Springs,” the indie rom-com with a science-fiction twist. With a record-breaking $22 million price tag, Barbakow’s directorial debut was a hot ticket item when it was picked up by Hulu and Neon after its premiere at the Sundance Film Festival back in January. For a purchase this notable, followers of the festival would expect a film that delivers on that publicity (“a tour de force of cinema,” if you will). Instead, we have a film that feels more at home with studio-driven comedies rather than offbeat Sundance favorites (i.e. “Clerks,” “Napoleon Dynamite,” “Sorry to Bother You,” etc.).

On the day of her sister’s wedding, maid of honor Sarah (Cristin Milioti) couldn’t be less invested During her inebriated appearance at the reception, she stumbles across party boy Nyles (Andy Samberg), who accidentally leads her inside a nearby cavern radiating an ominous orange glow. As a result, Sarah wakes up the next morning to find herself stuck in an infinite time loop, always relieving her sister’s wedding day along with Nyles, who has been stuck in the loop for longer than she has.

What begins as a simple pleasure for Sarah to relieve the same day over and over again transpires into an eventual realization regarding her relationship with her sister (Camila Mendes) and, in particular, her sister’s fiancé (Tyler Hoechlin). From there, Sarah is left to her own devices in order to escape the time loop, while Nyles has to decide if he’s willing to return to the life he once had before.

Out of the gate, Barbakow immediately sets the tone by telling us that “Palm Springs” is first and foremost a comedy, one that quickly finds its footing within the chemistry between Milioti and Samberg. Editor Matthew Friedman also cleverly shifts between the perspectives of both characters, essentially showing each character’s individual actions and how they affect the course of each day.
Yet “Palm Springs” never really feels like it’s doing anything different than what other “Groundhog Day”-esque films have done before it. By no means was I expecting a game changer for the genre as a whole, but rather, a refreshing change of pace from comedies that play it too safe. Unfortunately, that “sheer absurdity” is all you really get. “Cinematic comfort food” might be the best way to describe the film, and while that’s not a derogatory label, it’s not necessarily high praise either.

And in talking about the drive-in experience, one might say that there is no substitute for watching a film from the comfort of your own vehicle. But even when acknowledging that, the argument still arises that the experience is more of a once-in-a-while attraction than a mainstay method of moviegoing.

Because for cinephiles, the content on screen can be more than enough, so distractions only serve to diminish their entertainment. Whether it be a limited viewpoint because of where the vehicle is parked in relation to the screen or the unwanted presence of various insects if you choose to watch outside, not everything will be perfect. The need to stay socially distant can also raise some concerns, as some viewers may not feel comfortable enough to go to the bathroom or purchase their concessions, let alone stay there to enjoy the movie. Not to mention, there’s also an almost overwhelming sense of paranoia that the car’s battery will become fully drained on the drive home after leaving the radio or air conditioning on for hours on end.

But the experience is still an attraction nonetheless, one that’s meant to be fun in the moment. Although it may not be ideal for most cinephiles, given the less-than-slim chance that every theater in America will immediately reopen for a blockbuster like “Tenet,” this is the closest they’ll have to recapturing that feeling.

For ordinary patrons, it’s arguably a night well spent. For cinephiles, it’s an experience that comes with its fair share of sacrifices. But for a popcorn comedy like “Palm Springs,” moviegoing by way of a windshield is certainly one way to pass the time.