The Battle With ICE Is Not Over, and Here’s Why 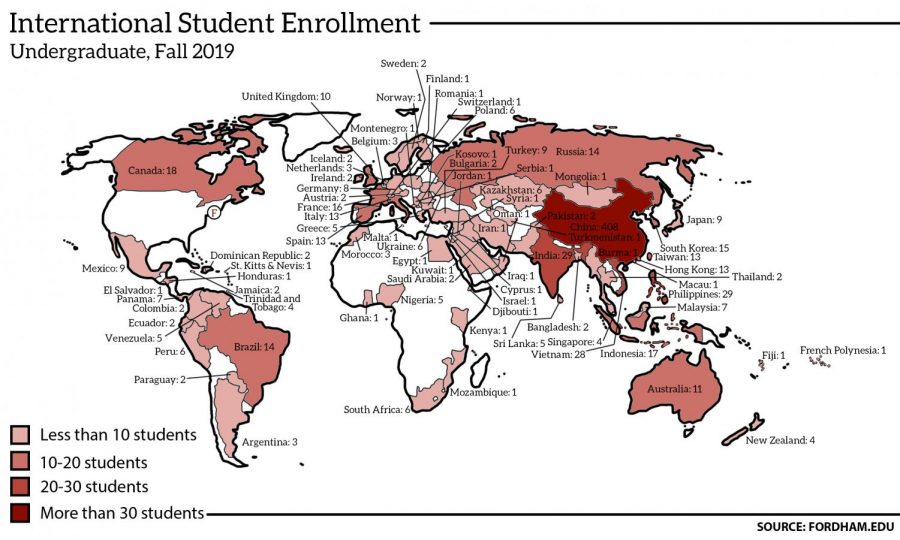 “How can an international student such as myself make the most of their college experience this fall without going completely insane?”
I contemplated this question on July 6, when the U.S. Immigration and Customs Enforcement (ICE) released new regulations for international students for the upcoming fall semester. The gist of the measures was as such: Those planning to take the semester online were to leave the U.S. immediately or risk deportation. The cherry on top of this confusing and unnecessary mess of rules? Although the U.S. was keen on kicking us out of the country, there was no information for eligible students taking in-person classes to get back into the U.S. Thankfully, due to the collective efforts of Harvard, Massachusetts Institute of Technology and other universities, our own Fordham included, ICE’s decision was revoked. This collective victory over ICE’s unreasonable demands that would have benefited no one, shows that we, indeed, can achieve positive change through collective and organized action. However, it is not yet time for celebration.

I am immensely grateful that international students no longer have to leave the U.S. if they choose to take the fall semester online. For many of my friends, having to choose between returning home and dealing with the time difference or staying in New York and subjecting their health to further risk was an emotionally harrowing choice. Now, they can both stay in their preferred time zone and take online classes, if they wish to do so. However, the question of entering the U.S. to attend the fall semester remains an unresolved issue for many international students, myself included. F-1 is the visa type that lets students pursue academic studies in the U.S. Depending on the country, visas can be issued for the whole duration of a student’s studies, or they can be issued for a single academic year with the possibility of renewal.

Russian students, like me, fall under the one-year F-1 visa category. The U.S. embassy in Russia has still not resumed the issuing of non-immigrant visas and doesn’t count attendance at a  U.S. university as an “emergency” that would grant an exception. Therefore, I will likely have to subject myself to the same torturous routine of attending classes that would be at 6 p.m. ET but are instead at 3 a.m. Moscow Time that I had to go through this spring. Now, you could argue that some of it is my fault. After all, it was I who chose to leave the U.S. on March 15 after Fordham had closed its doors. However, I am not the only one to blame for this situation. For some reason, the U.S. thinks that letting international students into the country will pose a greater risk of a spike in infections than the premature re-openings of public areas in U.S. states. The disaster that is the U.S.’s handling of the pandemic and the general xenophobia of the U.S. government are two main reasons preventing me and other international students from coming back.

The international freshmen are in a similar situation. It’s not up to them whether the U.S. embassies are open in their countries. And due to travel restrictions, they can’t even take a chance with an open U.S. embassy in a neighboring country. That leaves two choices for these freshmen: Start their college career at Zoom University or take a gap year/semester. Needless to say, both have their downsides. Doing your first semester of college ever online widely limits your possibilities of making strong personal connections (although it is doable!). Taking an academic leave has a chance of negatively impacting your F-1 eligibility in the future, even though the revocation of ICE’s measures has decreased that risk. The international freshmen are stuck between a rock and a hard place. You most definitely can’t argue that it was their fault.

Another question to ask is: What does ICE’s failed attempt at policing international students say about America itself? The measures, if implemented, were certainly not going to decrease an average American’s risk of contracting COVID-19. They were not designed to make virtually anyone’s life better. But God forbid international students might start feeling welcome in the U.S. — then they might think of staying forever and taking those precious jobs from white male college graduates! ICE’s failed regulations were a product of the ever-present xenophobia and fear of the other, which is also evident in how the American government and populace treat Black people and people of color. If the USA’s own citizens don’t feel safe from their own government, how can international students?

The battle for international students is not over, and it will not be until we are treated with respect we deserve. Let’s not forget that the U.S. is still an epicenter of COVID-19, and for international students, and everyone, really, to feel safe in America, we must continue to campaign against premature relaxation of COVID-19 safety measures. I would also like to remind everyone, including myself, that being an international student is already a big privilege. We are not ICE’s biggest victims. You cannot advocate for our justice without also advocating for justice for men, women and children in detention centers along the U.S.’s southern border. ICE’s attempt at regulating international students is just one of the many examples of ICE being a heartless machine, and it does not represent ICE at its worst. To really help everyone’s cause, we need to fight for the abolition of ICE itself.