Football Season Suspended for the Fall

Patriot League cancels all competition due to coronavirus concerns 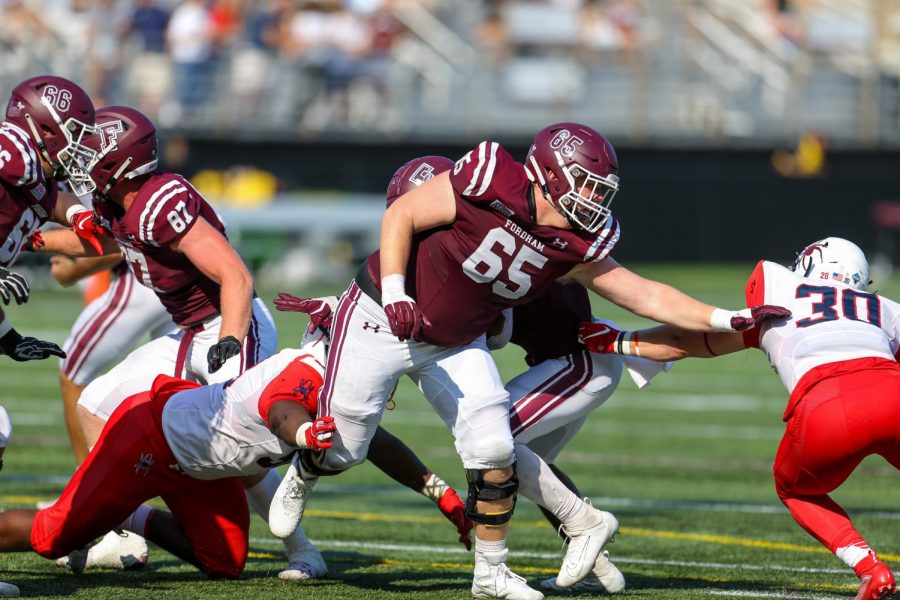 Ryan Joyce (65) holds off a player from the University of Richmond in a fall 2019 game that the Rams won 23-16. This year's season has been suspended indefinitely, though there are hopes of a possible spring season.

The entire fall season for the Fordham football team has been postponed indefinitely, bringing the Rams’ seasonal aspirations to a halt. The Patriot League, the Division I sports conference of which Fordham is a member, announced the suspension of the season on July 13, citing the continued COVID-19 outbreak across the U.S.

In its statement, the league expressed disappointment over the postponement, noting that “any degree of non-competition this fall is deeply disappointing to our student-athletes, coaches, and fans.” According to the league, the safety of student-athletes and their fans was the reason for suspending the season.

The fate of the football season was already in question after the Rams were forced to suspend their first three scheduled games in August and September.

Fordham University Athletics separately announced the Rams’ suspension of the fall season, noting that it is the first season that the university wouldn’t have varsity football since 1963, when Fordham football first competed on a club-level.

“It’s very disappointing, but it’s also an opportunity to have more time together,” Joe Conlin, the head football coach, said. According to him, the football team will continue training in order to remain competitive for any future seasons, whenever those may be.

The Patriot League affirmed in its statement that it would be looking into rescheduling the season to the spring if possible. “The League is committed to exploring creative approaches and alternatives to providing future competitive experiences to our fall sport student-athletes,” the statement read.

Conlin said that there were discussions of rescheduling the season to a later date, and “there’s talk of some sort of spring schedule … but that depends on however many conferences suspend their season.”

However, any plans of rescheduling the football season are entirely contingent on guidance from New York state, the Patriot League and the university itself, according to Conlin. “It would be great to get our guys back on the football field, assuming we could do it safely,” he said.

The Patriot League is the latest of a growing list of scholastic athletic conferences that have made the decision to postpone the fall season. The Ivy League, which hosts some of the most prestigious and competitive schools in the country, announced on July 8 that they would be suspending all sports until at least January.

The Big Ten Conference announced on July 9 that it would be restricting its season to “conference-only schedules” in order to minimize student-athletes’ travel and potential exposure.

Additionally, on the same day as the Patriot League’s announcement, the Central Atlantic Collegiate Conference also declared that it would be suspending its fall season.

In spite of the cancellations, Conlin said the team could take away some positives from the ordeal. “There’s now an opportunity for more time for the team to be together and train,” Conlin said, noting that the team hasn’t reconvened on campus for the last several months, as each team member has trained from home throughout the spring and summer.

The National Collegiate Athletic Association (NCAA) had previously announced that athletic teams would be permitted to have student-athletes return to campus and train together in limited duration. The organization also stated on June 17 that any cancellations or delays would subsequently impact when student-athletes would be permitted to return to campus.

The NCAA has yet to update its guidelines in light of the increased suspensions of the fall season.