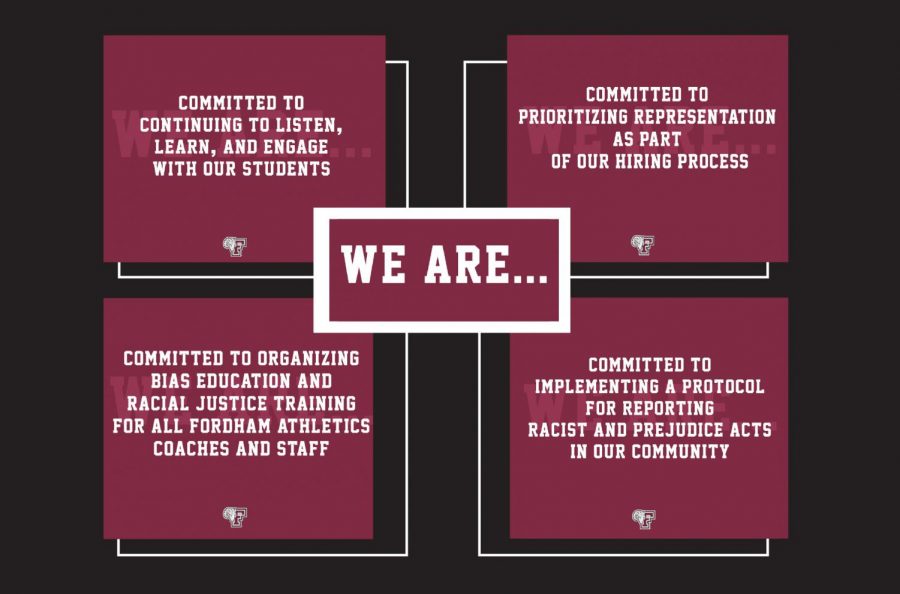 Fordham’s athletics department released a plan to address racism within the sports program, which they posted to their social media platforms. Students say the department needs to act rather than simply make promises.

By PATRICK MOQUIN and MAGGIE MCNAMARA

A national movement confronting systemic racism and anti-Blackness has challenged the status quo at Fordham — and the athletic department is at the forefront of the conversation. On June 18, Fordham Athletics was one of the first departments to announce a plan addressing racism in the community, with the intention of creating “an inclusive space that has zero tolerance for intolerance.” However, according to student-athletes, this issue is far more complicated than a few bullet points and long-term promises.

The department’s statement included several concrete steps, such as “organizing bias education and racial justice training for all Fordham Athletics coaches and staff” and “implementing a protocol for reporting racist and prejudice acts in our community.” Other items on the list are more vague calls for cultural change, such as “prioritizing representation as part of our hiring process” and “aiding students in creating a space to connect and engage in conversation.”
Student-Athlete Representation in Athletics Legislation
Fordham’s total undergraduate enrollment for fall 2019 across all campuses identified 4.3% of students as “Black or African American.” However, athletic teams often have far higher levels of diversity. Around 20% of the women’s basketball team and around 34% of the football team is Black.

Part of Fordham Athletics’ initiative is to bring student-athletes of color into more direct contact with the administration.

Since June 17, Cavanaugh has been contributing to a task force formed by the athletic department dedicated to developing anti-racism initiatives through discussion with athletes. The group meets several times a week and communicates directly with athletic department admin, providing their perspectives and ideas as Fordham moves forward with their intentions to promote tolerance and diversity on campus.
‘Action Over Words’
Cavanaugh sees these meetings, which take up a significant amount of her time, as helpful for student-athletes of color, but also expressed concerns that the group’s suggestions and efforts won’t end up being enacted by Fordham.

At one point during the interview, Cavanaugh’s concerns boiled over to frustration when she said, “If nothing’s done, if there’s no action, I’m going to sit in the middle of the court till there’s action. But it’s sad that it has to come to that. It shouldn’t have to come to that.”

The women’s basketball coach Stephanie Gaitley supported her player, saying that she was “confident that our team and department as a whole can make a true impact as we address racism.”

Gaitley added that the department is hopeful for a return to campus so that discussions can continue in person, at which point she expects an agreement about a tangible plan and timeline for implementation to be reached.

To explain what she meant by “action over words,” Cavanaugh repeatedly referred to a list of demands submitted to Fordham administration from ASILI, the Black Student Alliance at Fordham. The list called for actions the organization deems necessary for Fordham to effectively cultivate a tolerant and diverse environment. In a list of 11 demands, ASILI has found that Fordham is only addressing three of them, even after University President Rev. Joseph M. McShane, S.J. unveiled the school’s “Action Plan to Address Racism.”
Athletics and @blackatfordham
Cavanaugh said that she had not personally experienced racism firsthand at Fordham, which she attributed to her status as a high-profile athlete. However, she is a member of a larger student body that has grown increasingly aware of such experiences in recent weeks, most noticeably on social media.

Since June 18, an Instagram account, @blackatfordham, anonymously created by two Fordham athletes, has been publishing stories of racism in the community. Stories are submitted to the page directly by students and alumni of color to share their experiences at Fordham.

The account was founded by a current Fordham student who then asked a friend and recent Fordham graduate to help maintain the page. Both compete or have previously competed for Fordham Athletics, and both agreed to speak anonymously with The Observer.
“Literally nothing was done. [The athletes] definitely brought it to administration so that’s why I’m confused.” Founder of @blackatfordham
At first, the founder was uncertain about creating such an account but did so after deeming Fordham administration’s response to the national movement inadequate. They said, “Seeing that the university was going about their day like nothing was happening, I decided to make it. It was mind-blowing to me.”

The two page runners only began accepting submissions three weeks ago, but in that time, hundreds have poured in. The graduate described this experience as “mentally exhausting,” given the frequency of the messages and the content within each.

They also said, “There’s definitely this overwhelming feeling of responsibility for these stories. The whole purpose of it at all is to elevate these voices,” referring to students of color specifically.

The stories posted on the account range from acts of ignorance carried out in passing to allegations of outright racism and bigotry. Although most of the submissions are anonymous, several of the individuals identify themselves as athletes and tell stories directly involving their negative treatment on various teams at Fordham. All of these stories can be found on the account.

As athletes, the creators both noted that these specific stories had the most impact on them personally, with the founder saying, “literally nothing was done. [The athletes] definitely brought it to administration so that’s why I’m confused.”
Athletes’ Experiences on Campus
As student-athletes themselves, the two creators expressed how the experience of a student-athlete of color is different from any other at Fordham.

The founder sometimes wished they didn’t play a sport because they suspected that they’d be treated much differently, saying, “It’s a shame that I’m almost an exception just because I’m a student athlete.”

Meanwhile, the graduate shared a different perspective. They first pointed out how being an athlete could help a Fordham student of color, explaining that, “Being on a team and playing a sport, and knowing that I have a place on that team, gives me a different feeling versus people who don’t have that, and are at Fordham and don’t feel like Fordham supports them or has a place for them.”
“It’s a shame that I’m almost an exception just because I’m a student athlete.” Founder of @blackatfordham
That being said, the graduate repeatedly stressed that the experience was different, not better. Feelings of “debilitating loneliness” or “of just not belonging” occasionally persisted in the graduate’s personal experience at Fordham, despite the fact that they had a place to go to for support.

In addition, the graduate has also heard — and published — many stories of how quickly the aforementioned refuge a team provides to a student athlete of color could be taken away by hateful actions or words perpetrated by a coach or program leader.

The graduate explained that such a relationship could be particularly damaging, saying, “When that’s someone you have to see every single day, you have to answer to every single day, you still have to somewhat respect, it’s a different kind of psychological effect.”
‘Hesitantly Optimistic’
Both creators agreed that something had to be done to specifically help student athletes of color, as their experiences are different from those of the larger student body. Both creators echoed Cavanaugh when noting that ASILI’s list of demands was not being met, but on the whole, agreed that the individual statements made by Fordham administration and the athletic department were a step in the right direction. They were not, however, cause for celebration for them.

After receiving since-deleted hate comments on the page calling students “ungrateful rats” for demanding further change, the graduate felt pressure to accept what the university has done thus far. After pointing out that decades-old graduates have been sending them the same kinds of stories that current students of color are submitting, they could only be hesitantly optimistic about the plans currently in place.

The graduate said, “I definitely appreciate where they’re going. But again, I think that something the university may not understand… is that you have people that have been begging you for years to do this, and it took this huge public situation, people dying, for you to wake up. As grateful as people are… it’s also bittersweet. You could have had this solved for years now.”