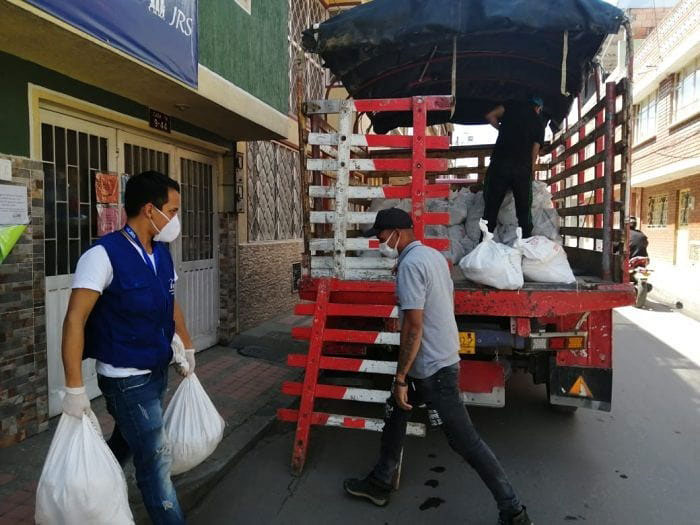 Workers with the Jesuit Refugee Service distribute supplies in Soacha, Colombia. Quarantine measures necessary to control the spread of the virus have placed economic strain on many families.

As the novel coronavirus pandemic wanes in some previously hard-hit areas like New York City and New Orleans, Latin America is becoming the new epicenter of this deadly pandemic. The density, inequality and economic concerns of the region make it especially vulnerable to devastating effects from this virus. As of June 25, four countries in Latin America have over 190,000 people infected: Brazil, Peru, Chile and Mexico.

Governments in Latin America have responded to the pandemic in a variety of ways, with countries like Chile instituting lockdowns in (mostly urban) regions of the country, while Brazil forwent a nationwide institution of social distancing measures due to President Jair Bolsonaro’s dismissal of the virus as a threat. Brazil now has over 1.1 million cases and is the second-most-affected country in the world after the United States.

Many cities in Latin America are extremely dense. Mexico City and São Paulo are some of the most overcrowded cities in the world, and residents rely heavily on public transportation. Sadly, health care system capacity in cities like these is lower than those of health systems in wealthier countries. Most countries in Latin America do not have sufficient access to ventilators, which can be used to save the lives of those with severe cases of COVID-19 who may require intensive care.

Poorer neighborhoods in these cities are often even denser than in other cities, which makes social distancing physically impossible for people as they try to earn a basic living. There is a clear link between social marginalization — such as poverty — and the more detrimental side effects of COVID-19. For example, those living in poverty may be more likely to have health problems that could make them even more vulnerable to the disease than wealthier residents. They also are less likely to have access to sufficient health care should they need to seek treatment for a severe case of the virus.

A variety of relief and humanitarian agencies are working to assist people on the ground during this extremely difficult time. A coordinated regional approach to mitigate the damaging economic impact while working to provide humanitarian relief for the most vulnerable citizens would be the best way to quell the spread of COVID-19 and its societally damaging effects in Latin America.