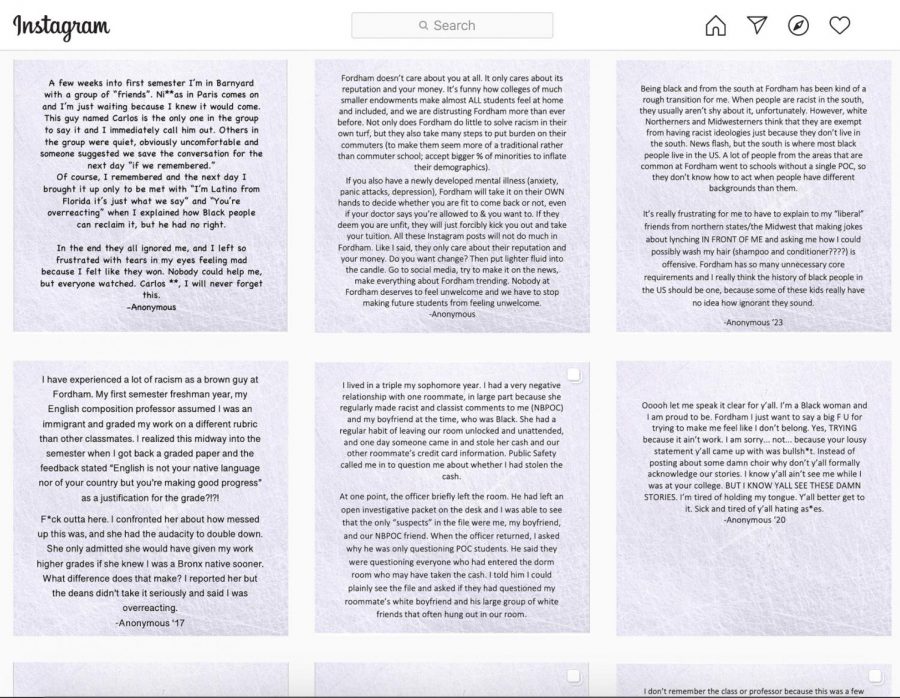 The @blackatfordham account currently has over 160 posts and over 4,600 followers. The creators of the account have said that Fordham's action plan “fails to address the larger issues Black, Indigenous, and people of color (BIPOC) at Fordham have been expressing” in their submissions.

In the wake of George Floyd’s murder and Black Lives Matter protests across the country, communities are demanding that higher education institutions do better in supporting their students of color, specifically their Black students.
Student Demands for Change
Petitions have circulated through the Fordham community throughout June, demanding the university to take actions like cutting ties with the New York Police Department and removing Dean Christopher Rodgers from his position, among others.

Student organizations have released statements, such as Rose Hill’s Black Student Alliance, ASILI, which published an Instagram post outlining their 11 demands for Fordham on June 22.

In response to the university’s action plan, ASILI republished their demands, checking off those of which were addressed in the email. Only three out of their 11 demands were met, including the promises to create a safe space for students of color, an employee bias training program and a written statement to combat anti-Blackness.

According to McShane, the plan was drafted in response to reading “many emails, petitions, and Instagram posts that have come from the University community.”
Social Media Movements

Two such Instagram accounts which have obtained significant digital influence in the Fordham community, @blackatfordham and @letstalkaboutitfordham, emerged in June to provide a platform for students, faculty and alumni to anonymously tell their stories of prejudice at Fordham.

The accounts mirror student-run pages at other schools such as Manhattan College. They serve the purpose of pressuring the administration to take action; on each post, members of the Fordham community often tag the university’s official Instagram. Each account now has hundreds of posts and thousands of followers.

“We’ve received many submissions detailing Fordham’s mishandling of Title IX cases, the dissolution of the Dorothy Day Center for Justice, Counseling and Psychological Services’ failure to adequately help students, complaints about Residential Hall Association, commuter alienation, the toxicity in the Fordham Athletics department, complaints about Public Safety, unacceptable and unprofessional behavior from individual professors, and also a decent number of complaints regarding the Theology department in particular,” the creators of @letstalkaboutitfordham said.

The creators said they have been receiving 20 to 30 submissions a day, and currently have almost 100 pending submissions.

“We feel like it’s a good start,” the creators of @blackatfordham said in response to Fordham’s action plan. “We appreciate Fordham trying to take steps forward. However, we were disappointed to see no acknowledgment of Aramark, public safety complaints, or any of the professors and deans that have been called out by the student body for racist and problematic behavior.”

“Their action plan fails to address the larger issues Black, Indigenous, and people of color (BIPOC) at Fordham have been expressing on our account that actively and systemically promotes a racist and anti-black environment on campus,” the @letstalkaboutitfordham creators said. “Their action plan contains small victories. Fordham needs to do more.”

In addition to bringing awareness to these accounts, members of the Fordham community also turned to the comments section on Fordham’s official Instagram page. When the university issued a written response to the Black Lives Matter movement and recognized Juneteenth as a holiday, students flooded the posts with comments. The comments span from demands to cut ties with Aramark to holding individual, named faculty members accountable — such as Rodgers.
‘Not Isolated Incidents’
Fordham students’ calls for concrete action are not isolated incidents; ASILI cites a University of Minnesota decision to cut ties with the Minneapolis Police Department as an example for Fordham to follow. University President Joan Gabel made the decision in May following student protests.

In 2019, student backlash against New York University’s administration led to the removal of Aramark as their dining provider after a racist Black History Month incident. There is currently another petition circulating calling on Fordham to remove Aramark as well.

“All of their responses so far have been completely ignorant of what students need and have repeatedly demanded,” Olive Zoda, Fordham College at Lincoln Center ’23, said. “With the number of people speaking out about their experiences at Fordham and organizing to demand specific tangible changes from the administration, you’d think Fordham would have done more than announce a prayer for Juneteenth.”

“To Fordham Administration: We want more concrete actions,” the creators of @letstalkaboutitfordham said. “We want concrete consequences for students and professors or administrators who display racist behavior.”

When asked about student organizations’ demands, the circulation of petitions and the future of Fordham’s role in social justice, Bob Howe, assistant vice president for communications and special adviser to the president, said, “We think Father’s letter and the action plan speak for themselves.”