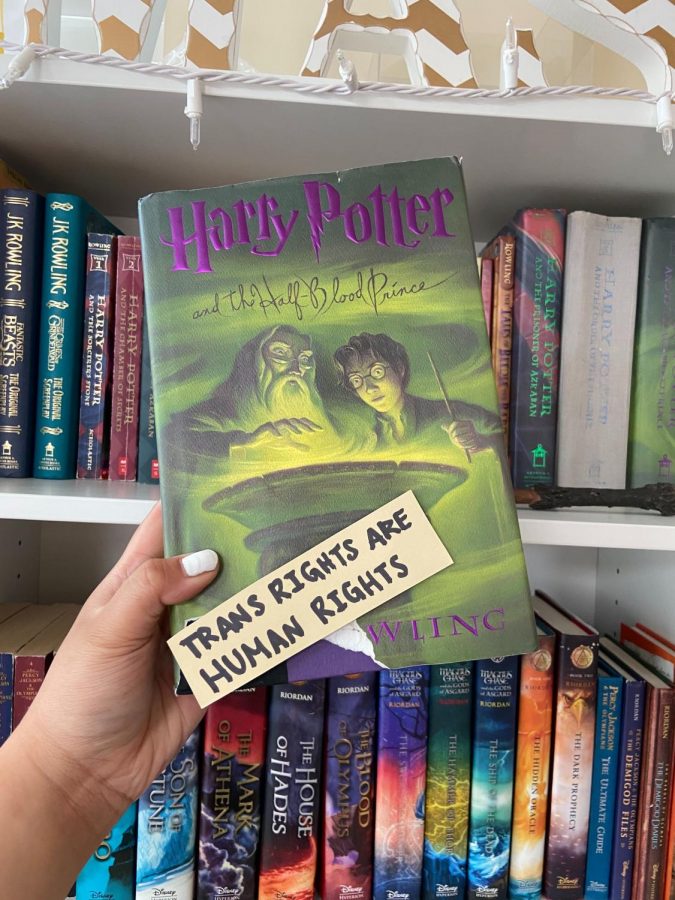 In the wake of her transphobic manifesto, Harry Potter fans created a new TikTok trend by painting over J.K. Rowling’s name on the books and replacing it with beloved characters or members of the Potter community like Emma Watson and Team StarKid.

Nearly 13 years after “Harry Potter and the Deathly Hallows” was published, fans are burning their Harry Potter books.

Since its publication, “Harry Potter” (HP) surpassed popular book series into an international cultural phenomenon. The HP fanbase, or “fandom,” includes all generations, all nationalities  and all identities. Besides the book series, Tony-award-winning play, two movie franchises and two theme parks, HP has inspired hundreds of blogs and podcasts, conventions, parody productions and a community of HP superfan influencers — all thanks to The Boy Who Lived from the mind of J.K. Rowling.

Prior to June, the acclaimed author had a history of transphobic social media behavior that was just subtle enough — liking tweets and following certain people — for her PR team to brush it as “middle-aged moments.” However, on June 10, Rowling made her stance clear when she  published a blog post captioned “TERF Wars” on her Twitter account — deemed the “transphobic manifesto.” “TERF” stands for transexclusionary radical feminist.

The fandom exploded. Overnight, fans posted articles, Twitter threads, blog posts and podcast episodes about why they were renouncing Rowling, or even HP completely, as well as refuting all the scientific inaccuracies, dated language and lack of citations in her manifesto.

“‘Harry Potter’ was such a big part of my childhood and young adulthood. I went to the movie premieres and the midnight book releases with my whole family. We even all have red hair like the Weasleys,” Kozub said. As a trans woman, Rowling’s statements affected Kozub on a much more personal level. “How do you reckon with this? When the author of your favorite book thinks that your identity is a societal evil, it’s pretty awful.”
Harmful Impact
“It’s even more worrisome because of how prominent of a person she is,” Kozub said. “She’s used her platform that she’s built up over decades and using her books with messages of love and empowerment to push forward negative and hateful beliefs.” With over 500 million copies of HP sold and Rowling’s 14.3 million Twitter followers, her message goes far and wide.

Shelby Isaac, co-host of the Potter-canon podcast “Hold My Butterbeer” (HMB), said it’s the “hero worship” and “nostalgic idolization” of Rowling that makes her message so dangerous.

After a year of Twitter silence, the timing of Rowling’s messages were anything but coincidental. Her transphobic tweet supporting Maya Forstater, who did not have her work contract renewed after refusing to acknowledge transgender employees’ pronouns, coincided with the reform of the Gender Recognition Act of 2004, which allowed “trans people (to) gain legal recognition of their lived gender” in Scotland, where Rowling resides.

She published her manifesto at the beginning of Pride Month. Days later, Republican Oklahoma Sen. James Lankford blocked the Equality Act vote while quoting Rowling’s post. Savannah Czarnik, another co-host of HMB, said, “When you have a global platform that so many people follow you, you don’t get to say harmful things to a marginalized group of people and think that’s okay. People are influenced by her opinion.”

Since HP is a children’s book series, concerns also arose on MuggleCast about Rowling’s influence over youth populations. MuggleCast is a renowned HP commentary podcast that formed in 2005. Trans activism writer and HP superfan Rori Porter guest-hosted on the podcast to discuss the Rowling controversy. “I read ‘Harry Potter’ at age 10, and if I had any sense of my gender, that would have been absolutely horrible, I probably would have internalized that … it would have been devastating,” Porter, who identifies as transfemme, said.
Dumbledore’s Army Fights On
“Whenever a moment of crisis comes up, I never need to panic because I have this community of wizard activists who will tackle it with me,” Marie Vitale, organizer of New York Dumbledore’s Army (NYDA), The Harry Potter Alliance (HPA) chapter in New York City, said.

The HPA is a nonprofit organization that “use(s) the power of story and popular culture to make activism accessible and sustainable.” With 123 chapters all over the world, the organization  plans social activism campaigns using the enthusiasm of HP. In 2016, the HPA established the Protego! campaign aimed at empowering and supporting the trans community and aiding better allyship. “Protego” is a protective shield spell in HP, just as Protego! aims to create a safe space for transgender Potterheads.

NYDA was already in the midst of trans, racial and anti-police brutality activism campaigns in support of the Black Lives Matter movement when Rowling published her manifesto. “Of course she did this during a civil rights movement,” Vitale said.

Their recent campaigns have included a House Cup, where social-justice actions win participants house points and dollar-matching donations to NYC charities. Prior to the manifesto, the Magical Roaring ’20s fundraiser in January benefited the NY Transgender Advocacy Group. “We’ve worked on trans activism before, and we are committed. It’s not a one-time action,” Vitale said.
Separating Art From Artist

“Separating the art from the artist” became a buzz phrase among HP fans who had to acknowledge Rowling’s flagrant statements. “There’s been this question of ‘Am I still allowed to love this thing that’s been made by a problematic person?’” Czarnik said on an episode of HMB.

“You can still read the books and if you want to, do it — books should not be off-limits because of the author that wrote them. But when you read them, think critically about what you’re reading and who wrote them,” Kozub said. It’s not so much separating the two as much as acknowledging where a work comes from.

Vitale said, “Separating the books from the author only goes so far; you have to recognize the bias that goes into the books.”

While acknowledging her part in the creation of the books, most major HP organizations have distanced themselves from Rowling, including Mugglenet, “the #1 Wizarding World Resource since 1999.” The Leaky Cauldron, a news and discussion fansite, also released statements renouncing itself and its content from Rowling in support of trans Potterheads.

Mugglenet, The Leaky Cauldron and HPA have no affiliation with Rowling and are not licensed by the Wizarding World franchise, yet they are arguably just as prominent parts of the community. The HP community is “bigger than her; it’s easy to divorce it and to make it our own,” Kozub said.

Although brought together by the books, NYDA is “part of a community that’s extraordinarily welcoming and overlapped with the LGBT community; we don’t need to feel beholden to (Rowling). No need for her anymore,” Vitale said. “The community has almost improved the books by making it a more inclusive space.”
Hogwarts School of Allyship
Separating the art from the artist is not enough, just as renouncing J.K. Rowling is not enough. Here are concrete ways to continue to love Harry Potter and be a better trans ally.
1. Validating Experiences
“How do I enjoy this world that’s so fantastical and feels so empowering if the person who wrote them didn’t write them for people like me? I struggle with that,” Kozub said about her thought process on moving forward as a fan of the series.

An episode of HMB discussed ways to be a trans ally while still being a Potterhead. HMB Co-host, wizarding cosplayer and licensed college counselor Michael Burson said, “The number one thing you can do for transgender, nonbinary, gender-nonconforming, intersex — anybody — is (to) affirm their gender. It’s that simple. It’s the number one protective factor for mental health problems and suicidal thoughts and suicide attempts.”

In her 3,700-word manifesto, Rowling did not once affirm that trans women are women or that trans men are men. The rejection of trans identities was enough for some fans to distance themselves from HP completely.

“A lot of people caught on way earlier and said, ‘I’m done.’ And that’s a completely valid choice,” Burson said.

“You should not ever tell someone that they should reconsider because that’s not fair to them. If they’ve come to this conclusion, that’s up to them,” Isaac said in response.
2. Ethical Consumption
Continuous book sales, visits to the theme parks, tickets to the play and merchandise sales all still financially support Rowling. Porter reminded fans, “As consumers of this media and this franchise, we’re at a constant dialogue with this. We are consciously choosing to pay and invest in it.”

HMB suggests ways of offsetting the cost of HP products like matching the movie or admissions ticket with a charitable donation. New readers of HP are encouraged to consider buying the books and movies secondhand or borrowing from a library. For wizard merchandise like wands or Hogwarts House memorabilia, consider buying from small independent businesses on Etsy or secondhand from eBay.

Other activities like streaming Team StarKid’s “A Very Potter Musical,” listening to Wizard Rock, attending LeakyCon or signing up for Major League Quidditch enrich the Potter community and have nothing to do with Rowling.
3. Diversify Your Media
“Transphobes creating influential media is nothing new,” Kozub said. “People reference Harry Potter a lot in pop culture. Just read another book. Reference something else.”

Kozub discussed the positive side of the Rowling controversy — the community is spotlighting other non-transphobic creators like Rick Riordan, author of the Percy Jackson series. His young adult and children’s series include queer and nonbinary characters. “What books and content can I read that is affirming to me?” Kozub said on discovering new books to read.

Tessa Netting, popular HP YouTuber and actress, said in a video condemning Rowling that trans people “deserve authors who see them, and include them, and value them, and celebrate them.”
4. Educate Yourself
Burson urges fans to continue to discover new ways to love HP and be an ally. “Do the work. Don’t expect your trans friends to do all the labor for you. The resources are out there.”

HP taught lessons of love, friendship and fighting for what’s right. The fans took the story and turned into something greater than a book series. “I think there’s something beautiful about how the whole series is about standing up against bigots and entrenched evil powers and then using it to stand up against them like, ‘Hey, you’re a bigot,’” Kozub said.

Many die-hard Potterheads painted over Rowling’s name on their book covers or destroyed their books altogether on TikTok. However, it was not only the fans who spoke out against Rowling online. Daniel Radcliffe, who played Harry Potter in the eight films, published an article on The Trevor Project’s website, an organization that provides crisis intervention and suicide intervention for LGBTQ+ youth, in support of transgender people despite his relationship with Rowling. He wrote, “If you found anything in these stories that resonate with you and helped you at any time in your life — then that is between you and the book that you read, and it is sacred.”

Vitale quoted author John Green when asked how NYDA will move forward with Harry Potter: “‘Books belong to their readers.’ Hogwarts is our home, and she might have created it, but it’s not solely hers.”