Changing the culture at Fordham for LGBTQ+ students 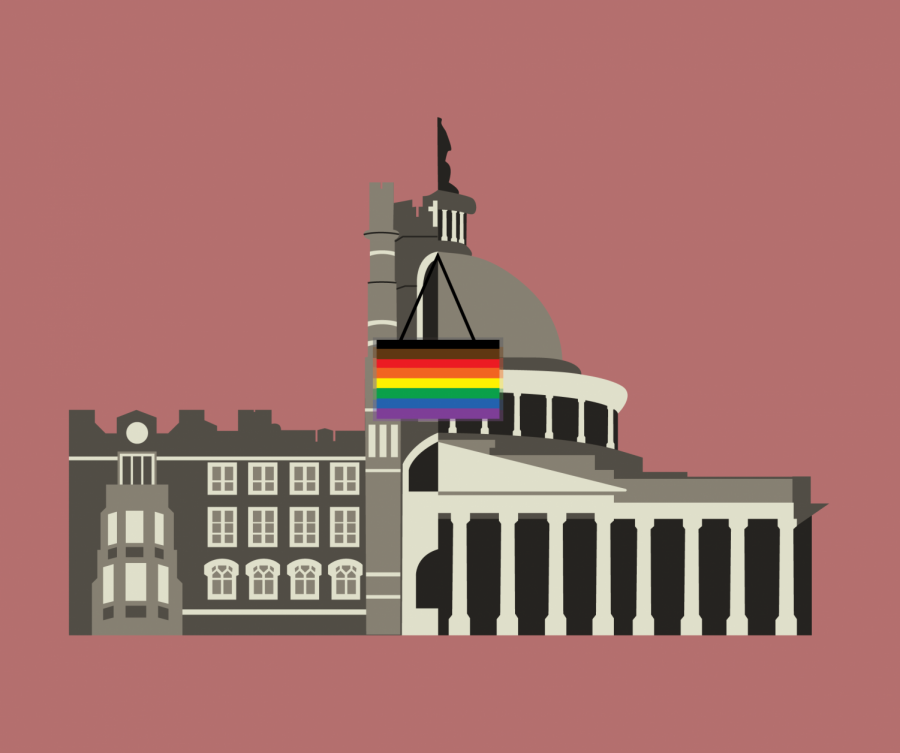 For the first time this fall, Fordham will be offering gender-neutral housing. The ability to have this right — along with gender-neutral bathrooms and use of chosen names on official documents — was a long time coming. Transgender and gender non-conforming (TGNC) activists and allies having been fighting for these options on Fordham’s campuses for years.

Also this year — on Monday, June 15 — the Supreme Court ruled that it is illegal to discriminate against a person’s sexual orientation or gender status due to Title VII of the Civil Rights Act of 1964.

The intersection of Pride month, national attacks on trans rights and a surge of online activism in the university community has brought the conversation about the treatment of LGBTQ+ students at Fordham to the forefront.
Safe and Unsafe Spaces
Fordham’s complex history supporting its TGNC students only makes the ruling more relevant on campus. In 2018, Aria Lozano, a transgender woman, was forced to live with men during her time at Fordham. She stated of her experience, “I am so uncomfortable with my living situation that I can’t even come out to him (my roommate), and for the entire first semester, I felt the need to hide anything that seemed ‘feminine’ out of fear, anxiety and shame.”

Every aspect of life at Fordham is influenced by restrictive gender and sex policies and transphobic culture: TGNC even have to graduate with their dead names. Seeking to uplift TGNC and LGBTQ+ students, a Lavender Graduation was organized in 2019 where students could graduate with their chosen names.

Patrick Hornbeck, chair of the theology department, was selected to be the master of ceremonies at the event. He said that the event “gives them a chance to celebrate in a space where they can be fully themselves … What I’ve understood of their experience is that there have been moments of overt bias that they have experienced. So I think for them to have a moment at the end of their time at Fordham to celebrate specifically as LGBTQ+ students is incredibly important.”

Being a private Jesuit university, Fordham sits at the intersection of religious values and modern education. Hornbeck explained it as, “A lot of us have have done our best over the last few years to change that rhetoric to say that, in fact, we are welcoming to LGBTQ members of the community, in part because of certain commitments we have as a Jesuit Catholic institution, even if the Institutional Catholic Church isn’t there yet.”
Fordham and New York Policies
Fordham has an official non-discrimiation policy that is in compliance with the New York State Sexual Orientation Non-Discrimination Act, which has been in effect since 2003. The act made it unlawful for a person to be discriminated against for their sexual orientation. Yet, up until 2009, it excluded protections for TGNC individuals and discrimination on the basis of gender identity.

Fordham’s non-discrimination policy states that the “University is an academic institution that … does not discriminate on the basis of race, color, creed, religion, age, sex, gender, national origin, marital or parental status, sexual orientation, citizenship status, veteran status, disability, genetic predisposition or carrier status, gender identity or gender characteristics, or any other basis prohibited by law.”

However, it is important to note that this policy also states that “Fordham University does not knowingly support or patronize any organization that engages in unlawful discrimination.” At the same time, Fordham supports the Catholic Church, and the Vatican has openly condemned TGNC persons in 2019 in a document titled “Male and Female He Created Them.”

There is no denying that Fordham has made progressive administrative decisions, but many students claim that there is still more work to be done. For example, student and employee health insurance does not cover any transition-related medical expenses, and there are a sparse number of gender-neutral bathrooms located throughout the Fordham Lincoln Center campus.
Beyond Policy
Many community members feel as though policies are simply not enough — for they claim it is the climate at Fordham that needs to be changed.

Lu Aubin, Fordham College at Lincoln Center (FCLC) ’23, wrote, “I believe Fordham as well as my home in New England should make a point to cultivate a space which is not just safe but empowering for queer folx. It is a community effort, but things like introducing yourself with pronouns at every opportunity is really important even though it may not seem like it.”

Fordham has not undertaken much of these efforts in the past. An anonymous student who identifies as nonbinary explained that before their freshman year they attempted to live with a transgender woman and were met with backlash.

After some discussion with administrators, they were told that it was not going to be possible and that their friend, who identifies as a woman, must live with men. “It’s really upsetting to see this behavior from a school that prides itself on being in the center of nyc – somewhere that’s known for being a place where lgbt+ people can be themselves,” they wrote.

Matt Kozakowski, FCLC ’21, believes that “the issues with Fordham are within the culture of the school.” He claims that the culture at Rose Hill makes him fear for his safety as a bisexual man. “If I go up to the Bronx, I make an effort to ‘dress straight,’ deepen my voice, ‘walk straight,’ ‘talk straight,’ ‘dance straight’: I do everything I can to make myself outwardly appear more straight. I do it because I feel safer that way.”

Kozakowski thinks that new practices will implement change. However, this issue is intersectional — “We can’t discuss how Fordham can be better for LGBTQ+ students without also acknowledging how Fordham needs to be better for all other minorities,” he said.

Hornbeck seconded this, saying, “for students who identify both as Black, indigenous or (people) of color and as members of the LGBTQ community, those are not just separate forms of bias that they endure, but in fact, those forms of bias can overlap and therefore become worse.

“It’s not enough just to say, oh, we’re doing these things for our LGBTQ students and these things for students of color. We need to be attentive to the ways in which those things all overlap in real people’s experiences.”
Faculty Perspectives

Rafael Zapata, chief diversity officer, said that he is constantly working to improve the climate at Fordham in order to ensure that each member of the Fordham community can be the best they can be. He noted that Fordham has a “robust bias response system,” but also acknowledged that for some, “I think the challenge of it is that a lot of the incidents that people experience around discrimination, around micro aggressions may not rise to the level of an actual violation of a code of conduct. But nevertheless it causes harm.”

He believes that some people at Fordham may benefit from a restorative justice practice, which brings people together to have a facilitated conversation in order to learn and change. “That is when we will create the kind of culture in which the community will respond in a way that people understand these are our expectations.”

Fordham frequently advertises its Jesuit mission to potential students — care for the whole person is not just a saying, but a daily task. When asked why they wanted to teach at the university in the first place, Zein Murib, a professor in the political science and women and gender studies departments, wrote, “What attracted me to Fordham was the Jesuit tradition’s deep value for social justice. Each year, across the country, transgender people — especially Black and Latinx transgender people — are murdered or violently assaulted for simply existing.”

They continued, “Transgender people are denied access to safe housing, effective healthcare, and reliable employment. Transgender children are bullied in school and are now denied opportunities to participate in sports teams across the country. If that’s not a social justice issue that is ripe for taking up, then I don’t know what is.”