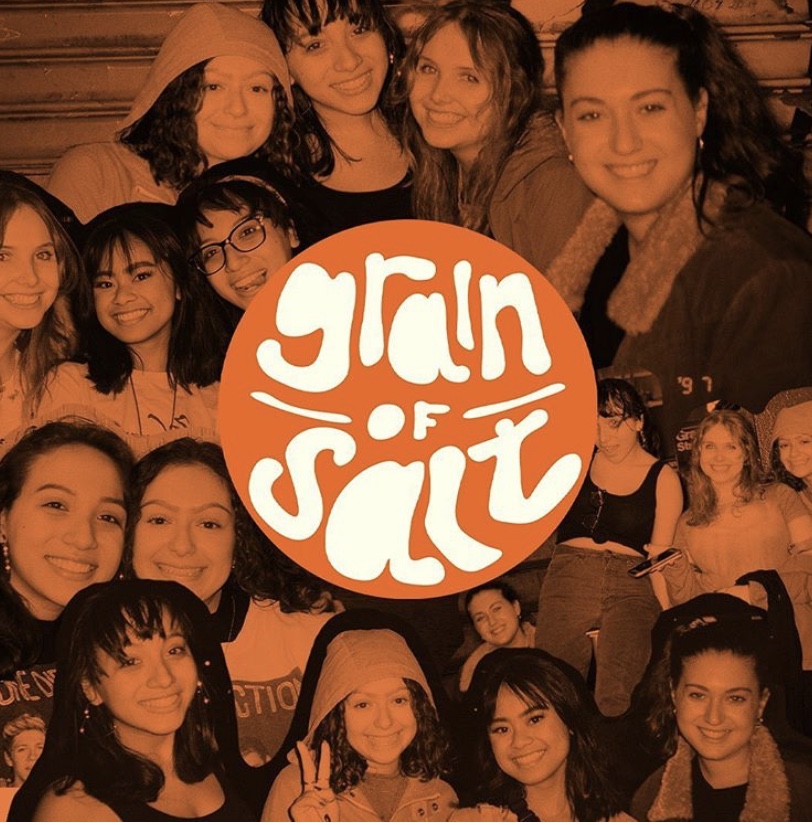 Otero, Pepe, Terrill, Riehl and De Leon have turned their summer project into a platform for an audience whose voices are often stifled: women and nonbinary individuals.

“be loud. be bold. be unashamed. because it’s all taken with a grain of salt anyway.”

This is the final line of the mission statement from grain of salt, a magazine created by five Fordham juniors. And from the start, the magazine has not skirted any of those promises. Sometimes through snarky satire, and other times with starkly naked vulnerability, the writers and creators of this magazine open readers up to “unapologetically sloppy takes on the world.”

When Kayla Otero, Ritamarie Pepe, Faith Terrill, Melanie Riehl and Isa De Leon, all Fordham College at Lincoln Center ’22, first became close friends, they didn’t imagine that they would spend the summer of 2020 creating a magazine.

However, toward the end of the spring 2020 semester, Otero approached her longtime best friend, Pepe, with the idea for grain of salt. Within days, Otero and Pepe, who are co-editors-in-chief, brought three of their friends on board and embarked on this “long-term group project.”

From the beginning, grain of salt set out to court a community that few people hear from: women and nonbinary individuals, specifically those between the ages of 16 and 25. “Their voices get pushed down in society,” Terrill, the submissions editor for grain of salt, explained. “If we can create a platform where these people are encouraged to literally blab their mouths about anything and they’ll know that there will be people who want to read it and will engage with it and respond to their content and art, I think that was a community we wanted to cultivate and grow as much as we can.”

“I feel like the population as a whole doesn’t get enough takes from women and nonbinary people that are unfiltered and that are encouraged to be as edgy as we would like them to be,” Otero added. “Diverse identities (are) what we want — identities that need to think a lot before they speak most of the time because they’re not even taken seriously in the first place. That’s kind of where grain of salt comes from: If my work is going to be taken with a grain of salt as a writer, then so be it, I’ll wear that as a badge.”

In particular, the idea of creating a platform where these groups felt they didn’t have to shoulder the burden of perfection was important. De Leon, the social media editor, described how “We really were passionate about …  wanting to create a space where there was no pressure to be perfect. We always talk about how language (even down to how people type in text conversations) and just the thought of writing something to be published can sometimes be super intimidating to people our age.

What does freedom from the pressure of perfection look like? In some ways, it’s loosening traditional English guidelines. Italics, bold lettering, slang, swear words and at-will capitalization are invited and encouraged, especially to emphasize thoughts and ideas. In their social media posts, traditional capitalization at the beginning of sentences is disregarded and all of the lettering is lowercase, except for a few choice words.

The relaxed writing style not only places less stress on writers to have polished or academic-sounding arguments, but it also allows writers to convey their thoughts in more conversational pieces that clearly showcase their voices, personalities and writing styles.

For Riehl, a copy editor at The Observer who doubles as the copy editor for grain of salt, the relaxed rules have given her an opportunity for deeper insight into and appreciation for style’s impact on conveying ideas. “That’s the beauty of this,” Riehl said. “I think it’s great that, on one hand, I can work in a very professional context with The Observer, but, on the other hand, I have the ability to do what I want and change copy as I see fit (with grain of salt). I like it because it gives me freedom to think about the implications and power that copy has when delivering a message.”

Aside from redefining language norms, the magazine has cultivated an impressive following and an even more inspiring community. Since its inception in late May, the 53 posts written by Fordham and non-Fordham students alike have been viewed almost 4,500 times. A recent TikTok made by the board members reached over 18,800 views and almost 5,500 likes. With the influx of attention from a base far larger than the Fordham student body, they have received submissions from young people in the U.S. and abroad, creating a truly global community.

For many of the editorial board members, the way the magazine has grown and has brought people together both within and beyond Fordham is nothing short of inspiring. Not only has the experience of writing and pitching ideas for articles led to meaningful interactions between Fordham students that may not have happened otherwise, but it also has introduced many of the editors’ high school and college friends to each other.

“It is so strange,” Pepe said. “Having your worlds collide — high school and college — is the weirdest thing … it’s also really cool because (all of our friends are) able to connect about these issues we bring to the table. People connect over these same struggles and these same ideas and support each other when they don’t know each other from a hole in the wall. It’s so cool … just seeing people connect over these issues and wanting to learn and grow together.”

Though a website filled with art and articles, an Instagram, a TikTok, a Twitter and a Spotify make up the bare bones of this magazine, it’s almost better described as a movement. By defying the conventional and remaking it into something they can use best to their advantage, Otero, Pepe, Terrill, Riehl and De Leon have turned this summer project into a platform for an audience not typically heard from — or invited to speak at all — to be vulnerable and share their experiences. Despite a worldwide pandemic, these five women have fostered a community and sparked conversations about topics that deserve attention.

Hear more from grain of salt’s editors-in-chief on Retrospect: