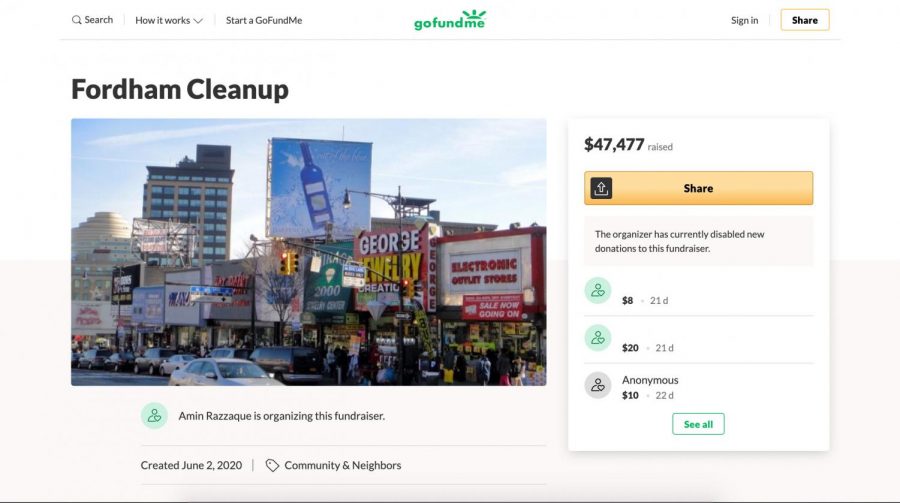 This GoFundMe page was intended to raise money for local businesses that suffered from looting along Fordham Road. It is suspected to have been a scam, and the money has not been distributed to the community as of yet.

UPDATE: This article originally appeared in print and online with the headline “Bronx Community Scammed by Fordham Road GoFundMe.” The Fordham BID announced July 17 via a press release that all of the money will be given out on July 18 at 11 a.m. They will begin at the Grand Concourse overpass in front of the art installation and continue down Fordham Road from there. The press release also stated that the companies receiving money are Sneaker Plaza, Beverly Hills Furniture, Metro PCS, Love & Beauty, Hopewell Pharmacy, Kingsbridge Pharmacy, Asencio Pharmacy and Crossway Driving School.

After protesting and looting occurred along Fordham Road on June 1, the Bronx community was quick to clean up the mess left behind. Nearly a month after multiple GoFundMe pages were created to financially support the destruction of the neighborhood, a GoFundMe created by Amin Razzaque is suspected to have been a scam.

The fundraiser was created with the idea to help local small businesses that had been damaged by the looting. It managed to raise $47,477 before Razzaque stopped allowing donations.

According to Razzaque’s business partner, Kevin Zatizabal, during the cleaning of Fordham Road, Razzaque made a connection with a man from the Fordham Business Improvement District (BID). The Fordham BID is a nonprofit organization that focuses on growing local businesses. Zatizabal stated that it was then that Razzaque mentioned creating The Bronx United.

The Bronx United was created to “educate the community and provide the resources needed to move towards success,” according to The Bronx United Twitter. Their core values include racial equity, building a united community, and education and empowerment.

In a Twitter thread, Zatizabal explained that he was brought on to be CEO of the company, while Razzaque would be COO. Zatizabal stated that as time progressed, he noticed that his coworkers were not actually working.

“I realized that I was doing all of the work, as you were able to see I was the one doing most of the talking during the interviews,” Zatizabal tweeted. “I started assigning work and deadlines for everyone accordingly. No one did what they were supposed to be doing. They showed up late to every meeting.”

First I want to thank everyone who supported me and who stood by me through all of this. I appreciate y’all for holding it down and knowing what i’m about in real life & did not assume I was part of a scam.

Zatizabal said that he started to feel like the GoFundMe was a scam when receiving documents started to take longer than usual. He stated that his experience as a former banker allowed him to know what a standard amount of time was.

After accusations of it being a scam began, Razzaque became angry with Zatizabal for not defending him, according to Zatizabal. This then led to Razzaque holding a meeting on “the future of The Bronx United,” meant to remove Zatizabal as CEO. Zatizabal decided to remove himself before a vote was held.

“Fortunately, with the suspicions that I had I made sure that Amin did not receive a business debit card, and I made sure that the checks were sent to my address. I will make sure that every single penny is given back to the community, which (was) my intention from the beginning,” Zatizabal tweeted.

In response to the scam allegations, Razzaque tweeted a four-page-long explanation, saying that the money is still in the GoFundMe because he needed proof that they were a nonprofit organization.

“I did not choose the personal option because I wanted the money to be strictly for charity and not to have to transfer the funds to my personal account,” Razzaque tweeted.

Also anything that is being posted under @thebronxunited accounts is not coming directly from me. pic.twitter.com/M2fnNIVVcx

“Our goal is to ensure those funds are given to those businesses most affected with absolute transparency. We are working on a date in the near future (hopefully within the next week) where together, we can present business owners with the funds in hand,” the tweet from June 22 stated.

As of July 6, all of the money is still in the GoFundMe.

We are working alongside the Executive Director of the Fordham Bid and their team. They have been guiding and advising us on how to execute this movement the best way possible. Below is a statement from the Fordham BID: pic.twitter.com/vB3YvbkUPG