Student Protesters Stand Together Against Police Brutality and Systemic Racism 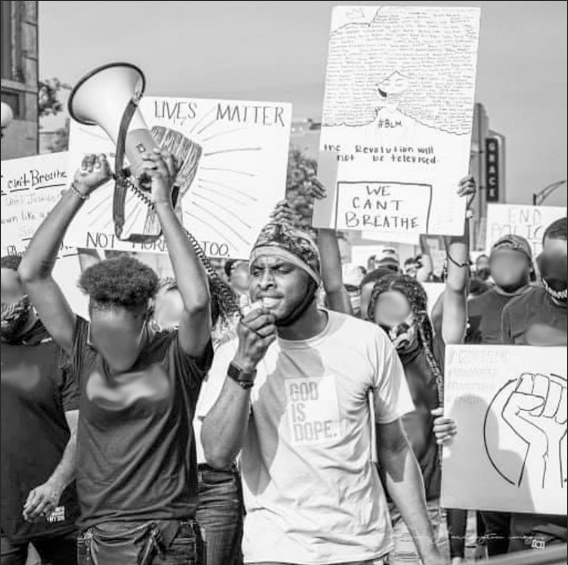 Raekwon Fuller, FCLC '23, attended a peaceful protest in South Carolina to fight back against systemic racism.

June is a historic month — it was in 1969 at the Stonewall Inn that queer activists, with trans women of color leading the charge, took up and fought against an early morning police raid on the gay bar. They fought against a history of systemic police oppression and constant attacks on their civil liberties — not by remaining quiet, nor by standing on the sidelines, nor demonstrating in a way that was “convenient” to others.

George Floyd was unjustly murdered on May 25 in Minneapolis, Minnesota. His death served as one of the many catalysts to fight back against a history of systemic oppression against Black people that is as long as the existence of the United States itself. This June, Fordham University students have embraced the Jesuit philosophy of “go forth and set the world on the fire” by joining in the nationwide protests urging for police abolition and the elimination of systemic racism.

Leading in the front is the Black Lives Matter (BLM) movement, which was founded in 2013 by Patrisse Khan-Cullors, Alicia Garza and Opal Tometi after the acquittal of the man who killed Trayvon Martin.

Minneapolis is the epicenter of protests, and Corina Fuentes, Fordham College at Lincoln Center (FCLC) ’21, has been attending protests in the city. Fuentes has been protesting against Minneapolis Police Department (MPD) brutality and their instances of racial profiling since 2016.

Her experience while peacefully protesting has been made miserable by the MPD. “I was on the I-35W bridge when the semi-truck drove into the peaceful crowd. Although I have always protested peacefully without breaking curfew, my encounters with the MPD have been less-than peaceful to say the least. While exercising my first amendment right to peaceful assembly, I have had mace sprayed at me twice (both times with absolutely no warning), I have had flash bangs and tear gas thrown into my vicinity, and I have had a member of the National Guard aim his shotgun at me,” Fuentes explained.

Systemic racism is practiced and carried out through generations. Abolishing the system demands the demolition of its symbols. Raekwon Fuller, FCLC ’23, protested in Anderson, South Carolina. “South Carolina is a historically racist state. First to leave the union, and last to come back. We have a confederate statue in front of the courthouse that says ‘In truth’s clear far-off light. That the soldiers who wore the gray. And died with lee were in the right.’ so basically saying slavery was right. I’m black. And that’s why it’s also important. I can’t sit silent,” he said.

Statues across the country with ties to the Confederacy and Christopher Columbus — both grounded in violent histories of white supremacy — are also being called into question, but this certainly isn’t the first time. It is important to note that there is a statue of Columbus that prominently sits in Columbus Circle — a block away from Fordham’s Lincoln Center campus. Most of these statues were built during the early 20th century, and then an additional spike of building occurred in the 1950s and ’60s.

According to James Grossman, the executive director of the American Historical Association, “These statues were meant to create legitimate garb for white supremacy. Why would you put a statue of Robert E. Lee or Stonewall Jackson in 1948 (over 80 years after the end of the Civil War) in Baltimore?” Over the past few weeks, many protesters have demanded, sometimes by force, the removal of said statues as they stand as symbols of the systemically racist society of the past with lasting effects into today.

Dane Westerlund, FCLC ’21, marched in Columbus, Georgia and was surprised to see the amount of people on the streets considering his city’s relationship with racism. He said that the protest “was significant to me as Columbus is a medium sized southern city in which I expected there to be a low turnout due to a long history of racism from a good population of the city’s people, however, the amount of people … was actually astonishing to me and I was proud of my city for showing up and speaking out over a good cause.”

In Colchester, Connecticut, Jaisa Pinnock, FCLC ’22, protested and was also surprised to see the people of her hometown marching together. She spoke of how Colchester was not racially diverse while she was growing up and how seeing her community rally together for Black lives meant a great deal to her.

“I grew up in a predominantly white town…I was surrounded by people who did not look like me. Who didn’t have hair like mine. Who didn’t have families like mine. Having a protest here was so meaningful to me. I can not speak for the whole black community in my town, but from who I have spoken to, it meant something to them as well. A protest is more than making signs and wearing black. It’s showing up for people of color, and physically standing beside them. It is physically taking time out of your day to listen to what they have to say,” Pinnock said.

Fordham students are taught from their first step on campus to appreciate the diversity of New York and the student community by being “men and women for others.”

However, it’s also important to acknowledge the position Fordham has taken in its community in the past. The Fordham Lincoln Center (FLC) campus was built on the homes of marginalized and low-income people who were ousted in the name of gentrification glorified by Robert Moses. FLC even commemorated Moses with a plinth on campus, which was removed in 2018.

Ethan Coughlin, FCLC ’22 and arts and culture editor, was in attendance at a protest in Baltimore, Maryland. He felt that protesting is his duty in order to take a stance for change. He feels that Fordham should be doing more to practice what they preach.

“Fordham needs to step up and take actual action instead of just ‘thoughts and prayers.’ If that worked, we wouldn’t be here now,” Coughlin said.

There was a similar sentiment behind Raquel Arabalo’s, FCLC ’22, reason to protest in Los Angeles. She said, “The most important thing I could do right now is listen to those voices that have been silenced for so long and then echo that … My dad is from Mexico, and I’ve been in the car with my dad when he’s been pulled over in the morning when we’re coming back from church and the officer asked if my dad had been drinking. He actually used to be a cop … and he said that the cops were basically taught to be racist. My parents always say the biggest gang members in the city are the cops.”

She continued, “I recognize that I’m half white and half Hispanic, and I can not understand the oppression that some of my friends face. That’s why I was protesting, because no one should feel they have a higher chance of going to jail and not getting into college because of their skin color.”

Other students were unsure of their role in the protests. Jesse McBrearty, FCLC ’21, attended a protest with her mother in Bloomfield, New Jersey. She explained that her mother was originally hesitant to attend. She described herself as a “financially comfortable white woman,” and because of this, she was fearful her attendance would come across as an overstep. She eventually decided to attend so that she could better educate herself and use her voice to speak out against racism.

McBrearty and her mother came to the realization that “if you’re worried about overstepping the boundaries at protests, attend anyway. Walk, listen, educate yourself. No one is going to blame you for wanting to learn about being on the right side of history!”

More than anything, students have focused on keeping the energy going and the conversations continuing. Fuller said, “Remember y’all had this same energy of reopening cases about Carole Baskins Husband. Why are we different. We want y’all to stand with and help us!!”

Protesting day in and day out can be exhaustive, but so is enduring racism.

Pinnock concluded, “It takes a lot to keep momentum day by day when it feels like nothing is getting done. To keep having conversations with people who may never change their minds can break our spirits and make us so angry. But this fight has been pushed aside for far too long. Keep signing petitions, going to protests, donating if you have the means to or even just have a conversation. It is a marathon, not a sprint.”