An All-Online Student Community Wrestles With Racial Injustice on Campus 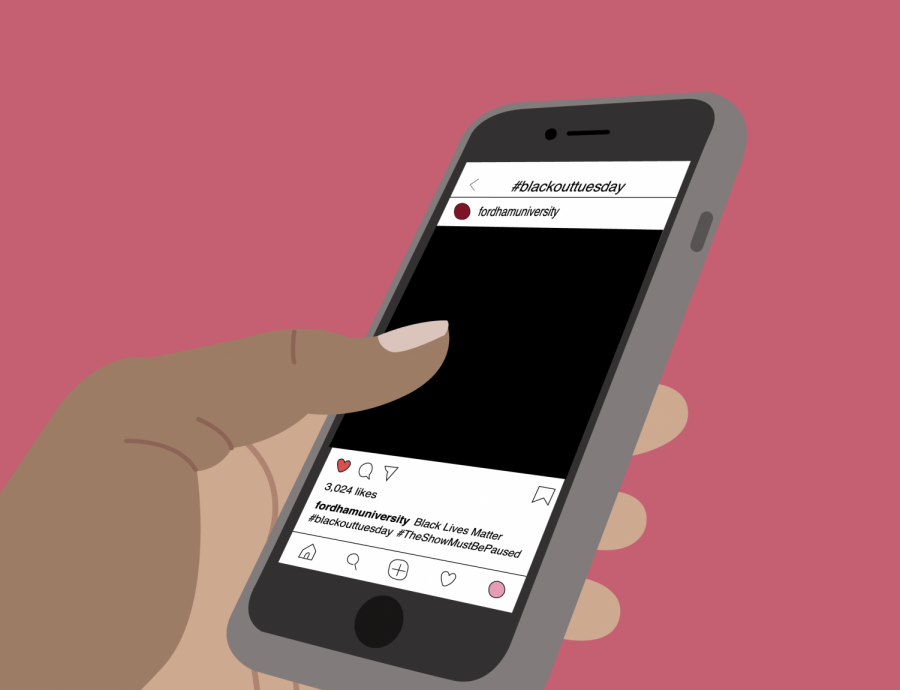 A black square on Instagram, posted on #BlackoutTuesday on Fordham's official Instagram. Many Black students have expressed their frustration and anger with the treatment of Black voices on campus, and have pointed out that social media posts are only performative and mean nothing without action.

“I am angry, I am frustrated, I am exhausted having to beg for my people to live,” Diane Greg-Uanseru, Fordham College at Lincoln Center (FCLC) ’21, wrote in an Instagram post on May 28. “Why do we have to beg for people to value us as human beings?”

Within hours, Black and brown students who were all too familiar with the feelings of fear and anguish that such headlines bring took to social media to post their feelings.

The news of Floyd’s death came for many as another heartbreaking casualty in a spring season tense with public instances of white Americans expressing unwarranted fear and deadly violence toward Black people. Fear and violence that, always present, seemed to feel bolder and more public in a country on lockdown.

“When I first saw the video, I was not surprised,” Justice! Somerville-Adair, FCLC ’21, said. (Somerville-Adair spells her first name with an exclamation point.) “I’ve been feeling numb since Ahmaud Arbery.” Many students were horrified by Arbery’s recorded murder, which gained national attention in early May. The death of Floyd, just 20 days later, bookended a month marked by deadly violence towards Black Americans.

The first wave of social media posts, led primarily by Black people, were mostly about trying to heal. But a few days later, the rest of the voices came. As protests against police brutality and demonstrations in support for organizations like Black Lives Matter (BLM) swept over the country, nearly all of Fordham’s online student circles engaged in the conversation. Social media platforms were buzzing with livestreams, stories, posts and comments about Floyd and police violence. For once, it seemed like other people in America were listening to the Black voices that had been speaking up against racism for years. Within days, hundreds of students were posting their indignation toward racial injustice and police brutality in America.

To the students who had felt the first shocks of Floyd’s death, the support was — and still is — encouraging.

“It’s gotten people to acknowledge things that they haven’t acknowledged before,” Somerville-Adair said. “It’s good to see support like that.”

But between the death of Floyd on May 25 and the first week of June, the social media clamor quickly took on a shape that was unrecognizable to the very people it was supposedly about.

“I started posting again because I felt like the messages being spread weren’t helpful,” Somerville-Adair said. “I mean, in blunt terms, white people are missing the point.”
A Petition for Black Students … Written Without Black Students
To hear Ahmari Alford, FCLC ’21 and president of the Black Student Alliance (BSA), tell it, several aspects of the second wave of social media posts have actually been more offensive than helpful.

One post in particular drew the negative attention of dozens of Fordham students. “On Monday I received a few DMs and messages about this petition that was going around,” Alford said.

The prominent Instagram meme page @lc_sinners posted a public petition on Monday, June 1, urging students to pressure Fordham University to cut ties with its food provider, Aramark. The company, which has been the target of scrutiny from Fordham students for years for a variety of both race- and health-related issues, is one of the nation’s largest food providers for prisons. Citing issues of police violence and over-incarceration, the students behind @lc_sinners posted the petition with language that originally came across as insensitive to many students.

“A lot of petitions, all over the country, are coming out of nowhere on behalf of Black students on campuses,” Alford said. “We’re not being consulted.”

The original language of the petition took a stance of advocating for “minorities” and explicitly stated that it “expected” support, recognition and assistance from Fordham’s various cultural and ethnic student organizations. Alford, as well as dozens of students who saw the petition, felt as though the language in the post was ignorant and disregarded the years of work that had been done beforehand on the issue. More importantly, students were upset that it seemed to imply students of color needed to be spurred into action when it comes to addressing racism.

“The implication that pressure needed to be put on Black students to work against racism is problematic,” Alford said. “BSA has been heading the push for divestment (from Aramark) for years.”

Alford and several other students left comments critical of the language in the petition, hoping to contribute their voices for a more inclusive and constructive petition. Instead, their comments were deleted.

“To silence the voices of Black students on an issue of racism against Black people is just absurd,” Alford said. “It shows that you don’t really care about the issue and that you’re just trying to show your support for optics.”

Just days after students first expressed their anger, sadness and frustration about racial injustice in America at large, Fordham Lincoln Center’s online community was ablaze discussing the actions of @lc_sinners.

The students behind @lc_sinners did not respond to The Observer’s request for comment.

“Speaking frankly, Black students are probably the most ignored perspective on campus,” Alford said. “We’ve been having the hard conversations all year long.” Several posts on Alford’s personal Instagram condemned the actions taken by @lc_sinners, as did several other students on their personal accounts. Additionally, a number of public accounts registered to official student organizations on campus expressed outrage toward @lc_sinners, particularly the fact that Alford’s comments had been deleted from the post.

According to Alford, she was eventually able to get into contact with the students who wrote the original petition, along with Batool Abdelhafez, FCLC ’21 and president of Students for Justice in Palestine.

Eventually, the petition was revised with Alford’s and Abdelhafez’s input. The updated version is still online and has been gathering signatures.

“I hope people do sign it,” Alford said. “And I hope that the administration listens.”

Alford was glad that she was able to contact the students behind the petition. “It’s a big step to get on the phone with someone you’ve offended and listen to them,” she said. “It’s good that we were able to have a conversation.”

However, her interaction with the students behind the petition, who are white, highlighted an important issue Alford had noticed in the online response to Floyd’s death, both nationally and at Fordham University.
A Balance Between Speaking and Listening
Alford explained that, while the national torrent of (mostly white) voices in support of Black Americans has been welcomed, it has also come laced with its own forms of racism.

“Much of this online conversation feels like a loud and public effort to prove that ‘I’m more woke than the next person,’” Alford said. “It’s hurtful because it feels like people just want a badge that says ‘I’m not racist.’ It’s all very surface level.”

The reality for Alford, as well as Somerville-Adair, Greg-Uanseru and countless other students of color on Fordham’s campuses is that racism is a constant, unavoidable fact of life in any public space — including, very often, life at Fordham.

“For a lot of us, our biggest fear is that this is a trend,” Somerville-Adair said. “We worry this will end in a month. Racism is an issue we deal with every day of our lives.”

Somerville-Adair expressed doubt in many people’s commitment to actively listening to those who have experienced racism in America. “I don’t think this would be happening if we weren’t all in quarantine,” she said. “Of course people are listening right now. They can’t look away.”

Somerville-Adair was frustrated overall by the national response. On the one hand, she was happy that so much visible support was being expressed; on the other, she was upset that it seemed to be too narrowly focused.

“So many people’s hearts are in the right place, but I just think that people need to focus on what the problem actually is. This isn’t just about George Floyd, specifically,” Somerville-Adair said. “It’s about the whole system. It’s like some people only notice things are racist when someone is dead and there’s a video.”

While Alford has appreciated the public social media support from Fordham students, she was also doubtful that every post was a commitment to combating racism. “The main thing to keep in mind is that these social media trends are an extension of the conversation,” she said. “If you’re really engaged and paying attention to the problem, a post shouldn’t just be the first and last stop of your activism.”

“For instance, ‘Blackout Tuesday,’” Alford said. “Myself and virtually every Black person I knew thought it was ridiculous.”

While opinions from Black Americans differ about the virtual posting “event” known as Blackout Tuesday, every student interviewed expressed distaste for the hashtag.

Greg-Uanseru took directly to social media to criticize the hashtag. “We’re censoring ourselves,” she wrote on Tuesday, June 2, citing how the same post repeated on a feed drowns links for donations, educational resources and safety information for protestors and missing individuals.

To each student, the primary problem with many posts is that racism is a daily, existential struggle. To many students, it has felt as though people think racism can just be signed away in a petition or outvoted through a show of hands.

“It’s not just an issue of police brutality or the color of your skin. It’s also what you wear, it’s how you speak, how you do your hair. It’s a constant, dehumanizing force that grinds you down if you’re not living up to what’s ‘white’ in society,” Somerville-Adair said.

Somerville-Adair was relieved that people were grieving alongside the Black community for Floyd’s death, but exasperated that such a graphic video was needed to prompt a nationwide conversation.

“It has to be so explicit for people,” she said. “They can’t just trust us when we say ‘racism exists.’”