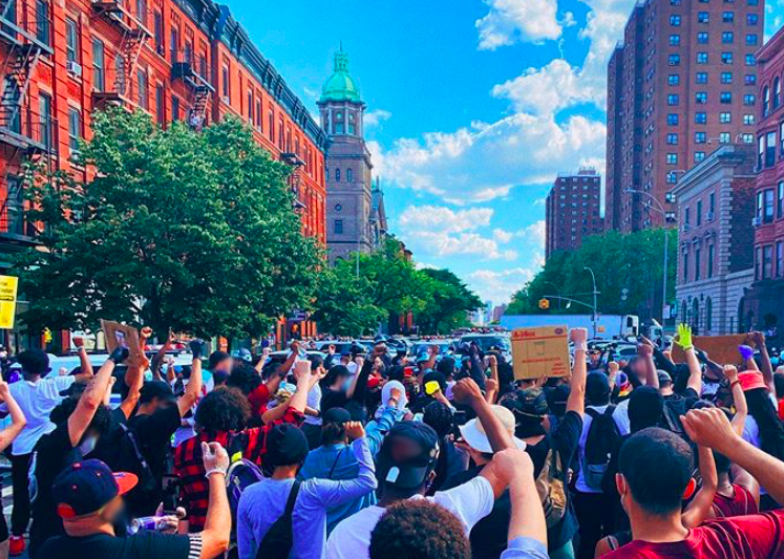 Members of the Bronx community protest on Saturday, May 30. After the peaceful protests, an unknown number of people broke windows and looted stores on Fordham Road. Fordham students are petitioning university administrators to contribute to the clean up effort.

On the night of June 1, protests broke out in the Bronx on Fordham Road roughly a mile away from Fordham’s Rose Hill campus. After the murder of George Floyd by police officers in Minneapolis, violent and peaceful protests began across the U.S. in opposition to police brutality. The Bronx looting, which drew an unknown number of people, left parts of Fordham Road littered with glass, ashes and debris.

“As a Bronxite seeing what’s happening on Fordham Rd is disheartening,” stated Social Media Coordinator of ASILI, Rose Hill’s Black Student Alliance, Gerald De La Cruz, Gabelli School of Business at Rose Hill (GSBRH) ’22. “I know there is a lot of anger and frustration at this time. I just pray this doesn’t end as bad as it started.”

On June 1, Mayor Bill de Blasio of New York City set an 11 p.m. curfew in the city to deter violence and looting during the protests. However, in Manhattan and the Bronx, many ignored the curfew and looted stores. De Blasio then moved the curfew up to 8 p.m. for the remainder of the week.

“Yes we are angry, sad and demand justice,” stated the caption of the post by the Bronx Native, a company dedicated to highlighting the positive attributes of the Bronx. “There’s different ways other than destroying our home.”

“Fordham Road is the lifeblood of the West Bronx, providing jobs as well as essential goods and services,” Cabrera said, according to NBC New York. “We are already suffering physically, socially and emotionally from the COVID-19 pandemic. We can’t afford to lose our economic engine.”

De Blasio explained that he has “confidence in the people of New York City.” He said he views the looting in the Bronx as a problem, but still does not want the National Guard deployed. Cuomo has chosen to have the National Guard on standby, but believes that the New York Police Department (NYPD) will be able to handle the protests.

In order to help clean up the Fordham community, a GoFundMe was created by Amin Razzaque. As of June 4, it has raised $45,117. Additionally, a second GoFundMe began in order to help small businesses that were hurt in the looting. By June 4, they had raised $16,483.

“We stand with our brothers and sisters as they expressed their pain but now our neighborhood will not be cleaned as quickly or diligently as those who were effected earlier this week,” the cleanup fundraiser stated.

On June 2, Fordham University posted on Instagram in support of “Blackout Tuesday.” The post received backlash from students asking Fordham to help clean up the looting.

“Please have people help cleanup fordham road or donate funds/supplies to the effort. Remember, ‘New York is my Campus’. If that’s true, there’s a lot the school can be doing right now for the community,” John Ross, Fordham College at Rose Hill (FCRH) ’21, commented.

Desireé Loyola, GSBRH ’21, echoed the sentiment, commenting, “If New York is really our campus, I hope you are doing something to help clean up the community today. It would be shameful to turn a blind eye.”

De La Cruz agreed that Fordham needs to help rebuild the community in any way possible.

“Fordham has a responsibility to at least donate to organizations or fundraisers to aid the Bronx in their time of need,” De La Cruz said. “According to our Jesuit mission, we are to be men and women for others and now is the time to do that, especially for the Bronx because the Bronx community is Fordham’s community.”

A Change.Org petition was also created, emphasizing that Fordham needs to donate. The petition calls on Fordham to match every student donation. As of June 4, it has 285 signatures.

Following the comments on their post, on June 3 Fordham posted a statement on Instagram regarding the looting. The post explained that many Fordham staff members helped clean up the looting, as well as the fact that Fordham is in contact with the community board to help determine the needs of the community.

Although the looting occurred on Fordham Road, a peaceful protest took place on the previous Saturday in the Bronx, beginning at 149th Street and Third Avenue.

“Being a part of the protest was angering and uplifting. Angering because after centuries of oppression, we had to still protest, fight, and yell for our right to live. Uplifting because the isolation of being a Black person in a white centered world was temporarily relieved due to the immense support,” stated Treasurer of ASILI Sydni Britton, FCRH ’22. “I am blessed to be able to participate, but I am sad and hurt to still be making sacrifices to gain access to the rights that my ancestors died for.”

The crowd was made up of roughly 200 people coming together from different faith and community groups. Speakers at the protest informed participants that they were there for a peaceful protest and would be marching to the Bronx County Courthouse.