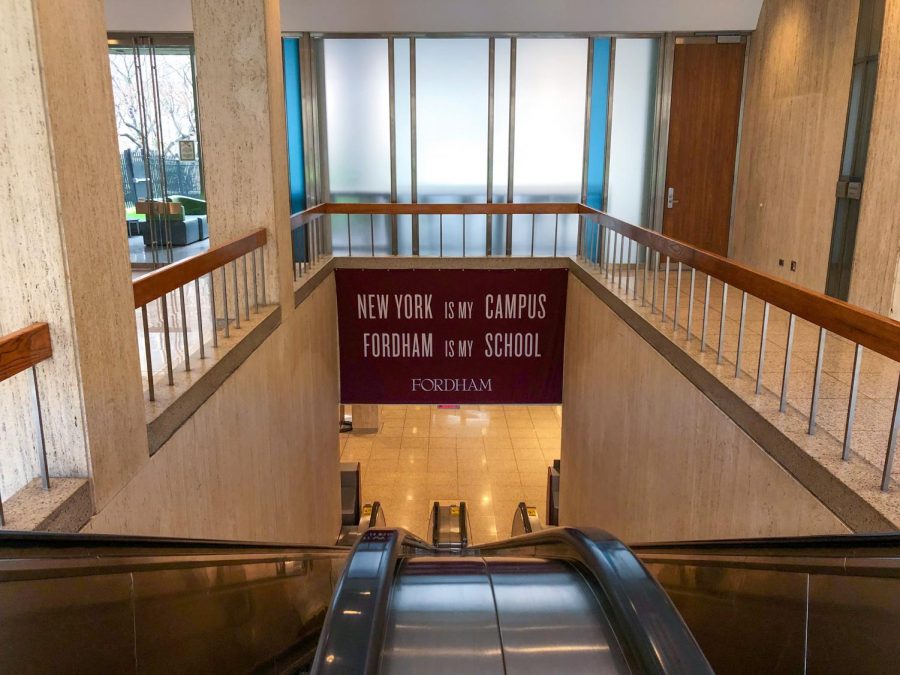 Fordham has yet to inform students whether in-person instruction will occur in the fall.

Even as the number of new coronavirus cases is dwindling throughout the United States — a result of social distancing tactics to flatten the curve — New York City is the last of the 10 regions in the state of New York to remain unopened.

Fordham University, with its Lincoln Center and Rose Hill campuses positioned in the New York City region, has yet to declare with certainty whether students will be allowed back on campus for the fall 2020 semester.

Plans for reopening will work in a “phased approach,” University President Rev. Joseph M. McShane, S.J., said in an email to the Fordham community on May 27. Moving from the current phase where only essential employees are allowed on the campus, Fordham will gradually return to normalcy as the health situation improves.

However, without authorization from the state to reopen, McShane said, “it is not possible at this time to predict the dates on which Fordham will be able to proceed from one phase to the next.”

The reopening of New York City is outlined in Gov. Andrew Cuomo’s New York Forward plan, which lists a series of seven health metrics, including a 14-day decline in hospitalizations and deaths, availability of at least 30% of hospital beds, a specified number of residents tested per month, and an established system of contact tracing.

So far, the New York City region has only achieved five out of seven of the steps in order to enter Phase One of reopening.
How Fordham Is Preparing for the Fall
In the meantime, Fordham is preparing for the fall by establishing a series of safeguards and contingency plans that will “optimize the health and well-being of Fordham students and employees,” McShane wrote.

On May 5, McShane announced the creation of a “task force” to coordinate plans for reopening the university. The seven members of the committee are responsible for overseeing 13 different aspects for reopening the university: COVID-19 screening and containment, infrastructure and sanitation of the facilities, human resources considerations, dining, residential life, student experience and experiential learning, intercollegiate athletics, technology-enhanced teaching and learning spaces, study abroad, research continuity, coordination with external agencies and external events, and welcoming guests.

In addition to the seven task force members overseeing the coordinating, there are 160 faculty administrators and staff members who are involved in the planning efforts for the 13 aspects of reopening safely.

The safeguards and operations that the committee is establishing are guided by the directives set forth in New York Forward, by the Centers for Disease Control and Prevention (CDC), and in a report from the Commission on Independent Colleges and Universities in New York, McShane said.

To comply with the orders set by New York state, to be in operation, Fordham is required to develop a set of testing protocols and pre-screening for new, returning and arriving students, as well as set up an adaptable plan for quarantining students that become infected.

Fordham also must alter the structure of a typical classroom setting to conform to the state guidelines issued in Executive Orders 202.32 and 202.33, which allow gatherings of only 10 or fewer people to gather. With an average class size of 23, Fordham is working toward repurposing non-academic spaces for instruction to reduce the number of students in a classroom at a time.
Professor and Student Reactions
Professors at Fordham are being encouraged to alter their courses to be adaptable for online or in-person, regardless of what the status of the fall semester is, according to Professor J. Andrew Foster, who teaches courses in the classics department.

Foster said that Dean of Faculty Eva Badowska held a town hall meeting during the last week of the spring semester to encourage professors to create hybrid courses for the fall and summer sessions.

For Foster, he is personally working to develop online material for all of his summer and fall 2020, and spring 2021 courses. “I don’t want people to be hostages — to feel coerced into coming back to school if they don’t feel safe,” Foster said. “So I want them all to be able to have access in some form.”

Eliza Pagel, Fordham College at Lincoln Center ’23, disclosed in a video produced by The Observer on March 3 that she has an immune-deficiency disorder, which would make contracting the virus extremely dangerous for her.

Coming back to campus in the fall may not be worth the risk, Pagel said. Depending on the precautions Fordham implements, Pagel said she is considering living at her home in Pennsylvania and commuting to campus for classes or events that may only be operating in-person.

Her commute from Pennsylvania is two hours long, but it would be worth it to protect her health. “It doesn’t make sense for me to stay on campus and risk getting sick for a few classes a week,” she said.

Under the “Screening and Containment” working group, Fordham lists an objective to “Address the needs of high-risk individuals.” For Pagel, the safest she would feel with coming back to campus fully would be if the university “could track who went off-campus”; this way, there would be proper isolation and quarantine procedures for every student who may be a risk to Pagel.

The option of completing her classes on-campus or online is helpful for Pagel, she said, so that she can feel more comfortable with whichever decision she makes for the fall.

Starting July 1, Foster said he plans to begin reaching out to his students in his fall courses and putting materials up online early. His hope is that students may be able to get a jump start on their classes for an easier transition into the fall, whatever it may bring.
Challenges to Adapting
Despite the suggestion for professors to be flexible, not all departments and faculty members may be as open to the adjustment.

“You really can’t tell a tenured faculty member to do anything,” Foster said. He explained that for professors who have taught in a traditional setting with a set structure for as long as they have been teaching, adjusting to the new needs of educating during a pandemic will be challenging.

“I think as faculty members, we just have to say, given the conditions, this is how much I can provide. I think we all just need to go easy on everybody,” he said.

Even though Fordham is yet to establish a concrete decision about the fall semester, on June 2, the university decided that Summer II classes will be delivered online, as announced in an email from the dean of Summer Session, Tara Czechowski.

Fordham previously had decided that Summer II classes would be slated for in-person meetings, but the “New York governor’s office just announced that New York City universities will not be able to resume face-to-face instruction in time for Fordham’s launch of Summer II.”

Summer II courses run from June 30 to Aug. 4. As of May 30, Cuomo announced that he expects the New York City region to meet all seven health metrics and enter Phase One on June 8, but Phase One does not give official permission for schools and universities to allow non-essential personnel (students, professors and administration) back on campus.
How Other Schools are Planning
Other colleges and universities outside of the New York area have already made definite plans for the fall.

The University of Notre Dame, a private Catholic university located in Indiana, announced on May 29 its decision to allow students back to campus two weeks earlier than expected, on Aug. 10. Instead of its usual breaks in October and November, students will complete their fall semester without breaks and then leave early for the end of the semester before Thanksgiving.

Notre Dame set this plan for the fall semester under the expectation that there will be a second wave of the coronavirus in the fall, which has been warned by medical health care physicians. However, there isn’t any concrete projection of when this second wave will start, Dr. Eric Cioe-Pena, an emergency physician at Northwell Health in New Hyde Park, New York, told Healthline.

The CDC’s projections for influenza are not completely translatable to the coronavirus because the many different strains of the virus react differently depending on environmental temperatures, according to Healthline. Healthline reported that it is uncertain at this time to predict which strain of the virus will be present for the second wave.

Although no educational institutions in New York City have declared definite plans for the fall semester since they are awaiting guidance from the state’s Education Department, Fordham’s announcement for the fall will likely be in accordance with the decisions made by New York University and Columbia University, Foster said.

“It would be hard for us to open (in the fall) if they don’t. Really, really tough,” Foster said.
Hear more on The Observer’s Retrospect podcast: