Saving the World, One Virtual Show at a Time 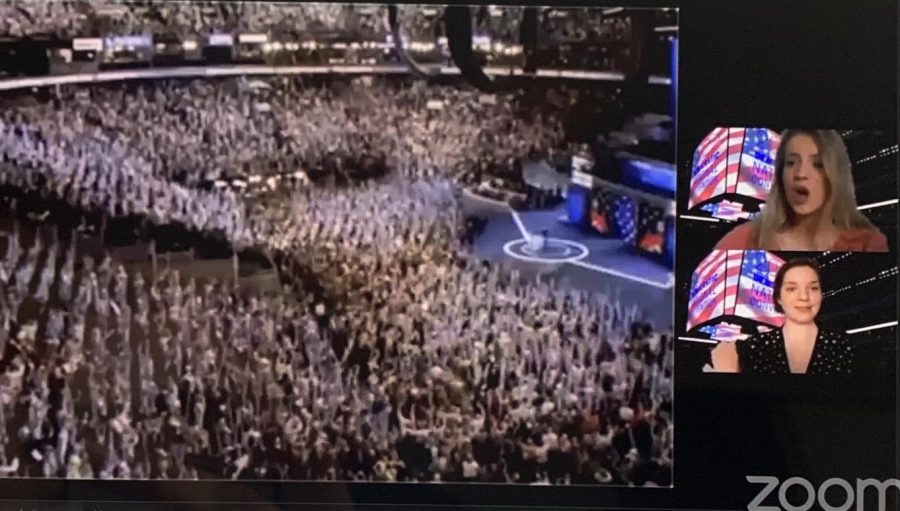 Alexis Chapin, FCLC ’21, and the cast and crew of “Madeline May Saves the World” used YouTube livestream as a way to display their hard work despite being separated.

What draws us to the theater? It is the feeling of being alive, heightened and immersed in a make-believe world. Thus, a live theatrical performance allows us to experience a world more real than real, but can we still experience the same virtually?

Introducing Fordham Theatre’s spring 2020 studio production “Madeline May Saves the World,” written by Alexis Chapin, Fordham College at Lincoln Center (FCLC) ’21, and directed by Madeline Barasch, an acclaimed director operating out of New York and Los Angeles. This maverick, make-your-adventure performance was set to open live on March 11, but as fate decided, the university canceled all in-person events two days before the show’s premiere. It seems like the histrionics of the coronavirus overpowered the dramatic strength of theater.

Besides the impressive turnout of 394 eager and novelty-starved Fordham students, the live performance with pre-filmed scenes involved the use of audience polls to further the storyline, an experience which captures some, if not all, aspects of an engaging theatrical experience.

Two New York City activists possessing a fanatical edge have a chance encounter with a renowned beauty influencer (based on a famous beauty mogul of a reality TV clan), presenting them with an opportunity of a lifetime. It’s hard to fathom how environmental activism and celebrity culture are related, but if our president can be an ex-reality TV star, according to Chapin, why not have climate change and the Kardashian look-alikes in one storyline?

While the show was a highly amusing reprieve from our current reality, it relayed a deeper message to its audience. “If we ignore climate change now, maybe after the pandemic, we could be faced with a bigger catastrophe,” Chapin said about the motive for streaming the play with a global crisis in the background.
“Layers of Reality Stacked Together,” Virtually
The show had been 90% complete before the coronavirus pounded on our doors with an iron fist. Despite the cancellation of university events, the show stayed in limbo. “For two weeks, we were just humans in the world, waking up and reckoning with the bizarre circumstances,” Barasch said.

The stream included live monologues by a cast member that accompanied the pre-filmed content. “It is a translation of the live format,” Barasch said. “One play could have different translations and adaptations.”

The interactive nature of the play allowed the script to translate virtually without any major changes. “The structure of the play actually lends itself well to this (format), because of layers of reality stacked together,” Barasch said. “(We) felt really lucky that the ideas of the show didn’t need to be looked at in a new light to go online.”

“A couple lines from the original script had to be cut,” Chapin said. The action directives in the original play had to be omitted; the inability of the actors living in different parts of the U.S. to share a screen and perform action sequences limited the scope of the performance. However, this limitation was offset by the proximity factor; the audience could observe and relate to the emotions of the actors at a deeper level by coming face-to-face with them.

Adapting the play to a virtual format presented a few technical challenges. “If we tried doing the whole play live, we could face internet lag and issues with sounds and virtual backgrounds,” Chapin said. “It took a few hours for the playwright, director and stage manager to figure out the capabilities of Zoom before bringing the actors on board.”

Despite the underlying global uncertainty, the makers of the show are hopeful of putting up an in-person theatrical performance. “The play has a viable life as an online art object now, but this does not mean that we cannot do a live version of the show,” Barasch believes. Also, both Barasch and Chapin are using this contemplative period to explore the new future of theater, whether it is embracing virtual plays or creating non-traditional works of art. “It is really important to not stop making things and to try and be excited about this idea of translating live to virtual,” Barasch said. Chapin, too, has decided to continue writing different projects while allowing her creativity to flourish.

Catch the virtual performance of “Madeline May Saves the World” on YouTube.