While the World Battles the Novel Coronavirus, China Is Transforming Into the Global Blockchain Leader 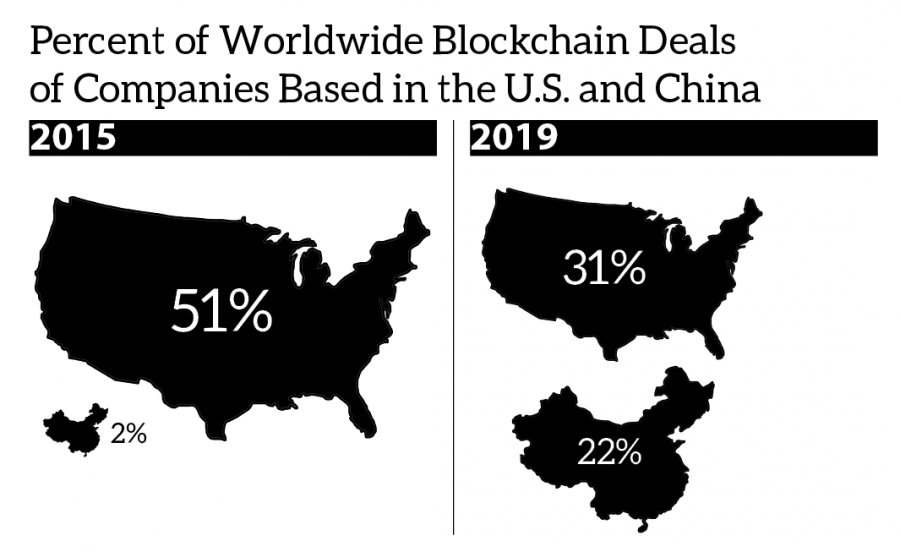 The novel coronavirus forces the attention of countries around the world to pivot inward. Alarming signs of “my-country-first” attitudes simmer dangerously, threatening to put globalization on the verge of reversing itself. With power vacuums originating, once-in-a-lifetime chances to revolutionize key industries might be lost to another nation forever. In order to stay a superpower, or for the sake of becoming the main one, you need to be the leader, not the follower, regarding industry-altering tech.

China, the world’s largest nation in terms of population with 1.393 billion citizens and the second-largest economy, has mastered the art of leading with technologies in recent years. In 2017, China’s State Council released its “New Generation Artificial Intelligence Development Plan” to become the leading AI power by 2030. While most people around the globe still use 4G for their mobile network and 5G in its toddler phase, China started 6G research and development in November 2019.

Blockchain technology gained tremendous fame in 2017 for Bitcoin’s bullish run up to $20,089 in value. The underlying technology, however, goes much further than the use of cryptocurrencies. To put it simply, blockchain technology means that digital information (the block) is stored on a public database (the chain). The information is immutable and not controlled by a single authority, making it a decentralized network. Not only does blockchain hold tremendous potential for technological advancements, but it also provides a power hotbed for the nation that holds the key to its unlocked potentials.
U.S. Laws
The patchwork of U.S. state regulations and poorly defined federal laws in regard to blockchain applies the brake on U.S. advancements. Only recently did regulatory clarity start to progressively develop. Yet, it might come too late as blockchain-directed development in the U.S. decreases, with deals shifting increasingly to China. In 2015, U.S.-based companies conducted 51% of the worldwide blockchain deals, while Chinese firms constituted for merely 2%. In 2019, the essence was of a different nature. The U.S. only accounted for 31%, and China’s share of the cake rose to 22%.

At the end of October 2019, Chinese President Xi Jinping endorsed blockchain, making policymakers and the private sector bullish on the technology in order to win an “edge” over other nations. By the end of November 2019, over 500 blockchain projects registered with China’s Cyberspace Administration. In fact, most blockchain patents in the world are now filed in China. The nation is in the process of putting blockchain at the heart of the Internet of Things (IoT), artificial intelligence, 5G and digital finance.

The global dependency of the U.S. dollar will ultimately find its harsh end if the U.S. does not step up its efforts to boost its blockchain position. China’s research into its Digital Currency Electronic Payment, a national digital currency built on the blockchain, has advanced rapidly since 2014. In the Chinese cities of Shenzhen, Suzhou, Chengdu and Xiong’an, the digital currency test phase is already installed, making China the most advanced nation with respect to digital government currencies. Starbucks and McDonalds, among other retailers, plan to test the e-yuan. In light of the coronavirus and the U.S. stimulus distribution, a potential digital dollar repeatedly surfaced in the news. However, it is still a far way off from obtaining actual government acceptance and implementation.
Who Will Have Financial Dominance?
Facebook exploits the dawning fear of the U.S. losing financial dominance to China for its own benefit in order to obtain acceptance for its planned blockchain-based digital currency Libra, scheduled to launch in 2020. For better or worse, after enormous regulatory hurdles and criticism, Facebook recently scaled back on its ambitious plans. While it previously aimed to implement a new global financial system with its Libra token at the center, it now presently only creates a conservative payment system where other existing currencies are also accepted.

Remember the date April 24 as the day the world may have changed forever. On this date, China launched its global infrastructure called the Blockchain-based Services Network (BSN). In a quest to improve the development of smart cities and the digital economy, the BSN aids blockchain projects to create and run new blockchain-based applications at a low cost (reduced by 80%). It will improve trusted and transparent data, value and digital asset exchange. This platform can be used by other nations to boost their own technological advancements. However, China holds the BSN’s root key, enabling the country to monitor all transactions on the platform. The BSN alliance aims to mitigate the platform into the global standard. As a consequence, the influence China will gain in other nations could leapfrog diplomatic relationships. This year, the BSN will connect 200 major Chinese cities and, later on, all 451 prefecture-level cities. The BSN will not only be the backbone of mainland China’s infrastructure, but also of the Digital Silk Road in order for interconnectivity to excel.

While the trade war between China and the U.S. continues, and President Trump persistently turns inward to his “America First” policy, China advances its influence into other countries. In 2013, the Chinese government called the $900 billion Belt and Road Initiative into life, also known as the New Silk Road. It is a global development strategy to bootstrap investment and development in around 70 countries across Asia, Europe and Africa to establish a double trade corridor by land and maritime routes. At the end of 2019, “The Belt and Road Initiative Blockchain Alliance” (BRIBA) was founded — deepening China’s superior trade position with blockchain adaptations for the companies working on the New Silk Road even more. Eventually, the e-yuan could be integrated as the main payment currency along the Digital Silk Road.

Technology undeniably plays an unstoppable, crucial role in our lives. The forefront superpower position will be inhabited by the most advanced nation. The starting whistle for the race of global blockchain supremacy has blown. With global players like the World Economic Forum and the United Nations pushing toward blockchain-based enterprise applications, the U.S. gambles away its position as a first-team player. The novel coronavirus-induced shift of attention might function as a catalyst for China to extend its newly gained lead even more. The U.S. is on a dangerous path to isolation and needs to wake up and heed the warning sirens.