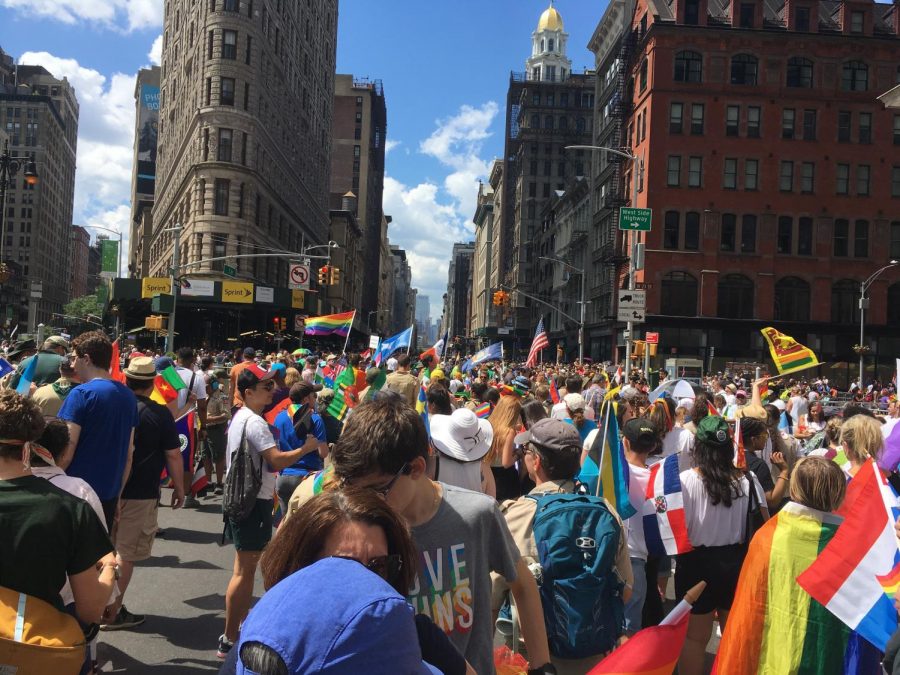 Participants took to the streets for the 2019 Pride March in New York City. This year, the usual celebrations will be replaced by a virtual Global Pride event on June 27.

With the coronavirus pandemic sweeping the world, NYC Pride 2020 has become one of many casualties. This will be the first year since 1970, when the Pride March was founded, that New Yorkers will not be able to celebrate together in person.

On April 20, the City of New York and Heritage of Pride, a nonprofit organization, announced the cancellation of NYC Pride 2020. While the city has seen an overall decline in coronavirus cases, organizers cited “the collective concern for the overall safety of the community” as the reason for canceling the celebrations months in advance. The celebrations were originally scheduled to take place from June 14 to June 28.

For many students, this would have been their first time attending Pride festivities. “It was going to be my first experience being with people I’ve always wanted to be with, without having to hide,” Raekwon Fuller, Fordham College at Lincoln Center (FCLC) ’23, said.

Some students will have to wait until next year, citing the inability to partake even in virtual celebrations at home. “I’m not out to my family,” a student who wished to remain anonymous said. “I’m not sure it’s going to be the same without my friends and that whole experience of being and feeling free. How am I supposed to feel free and express my identity when I don’t feel safe doing that at home?”

Instead of the traditional festivities, the event organizers are planning to place an emphasis on initiatives such as Pride Gives Back — a program that annually awards thousands of dollars in grant money to organizations that support the LGBTQ community.

As a result of the cancellation, companies that previously supported the LGBTQ community are no longer producing the same campaigns, and queer-owned businesses are predicted to take great economic losses.

“It’s always been frustrating to see companies commodifying the LGBTQ community during Pride Month and really using Pride for profit,” Minwa Alhamad, FCLC ’23, said. “Ever since Pride got canceled, companies realized they won’t be making money off of queer people so they haven’t released any of their usual campaigns. It’s just disheartening but I hope it’s eye-opening for people.”

Determined to gather despite the pandemic, Pride event organizers from around the globe have united to organize a Global Pride event on June 27. Led by the organization InterPride, Global Pride will be a virtual response to the cancellation and postponement of hundreds of celebrations.

“We need community and connection more than ever,” J. Andrew Baker, co-president of InterPride, said in an official statement.

Using online platforms, InterPride will livestream a 24-hour-long event that will be available to anyone with internet access. The virtual event will include musical performances, speeches and key messages from human rights activists. The innovative approach will allow people to celebrate from the safety of their homes while following guidelines set forth by the World Health Organization.

“I’ll definitely be attending the Global Pride that they’re organizing instead, just to see what it’s going to be like in comparison to actual Pride,” Annabel Filpo, FCLC ’23, said.

However, many people are unaware of the virtual celebration. “Honestly, I didn’t even know there was an online global pride until now,” Larry Hetz, FCLC ’23, said.

Some students voiced their concerns over the situation. “What upset me more (than the cancellation) were the bigots on social media using it as an opportunity to be disgusting and homophobic,” Filpo said.

Fordham’s Rainbow Alliance will not be holding meetings for the remainder of the academic year but have recognized the disproportionate impact of the coronavirus on the LGBTQ community. They encouraged members to donate to organizations who continue to do critical work, including The Trevor Project and the Elton John AIDS Foundation.