The Finances Behind Fordham’s Workforce 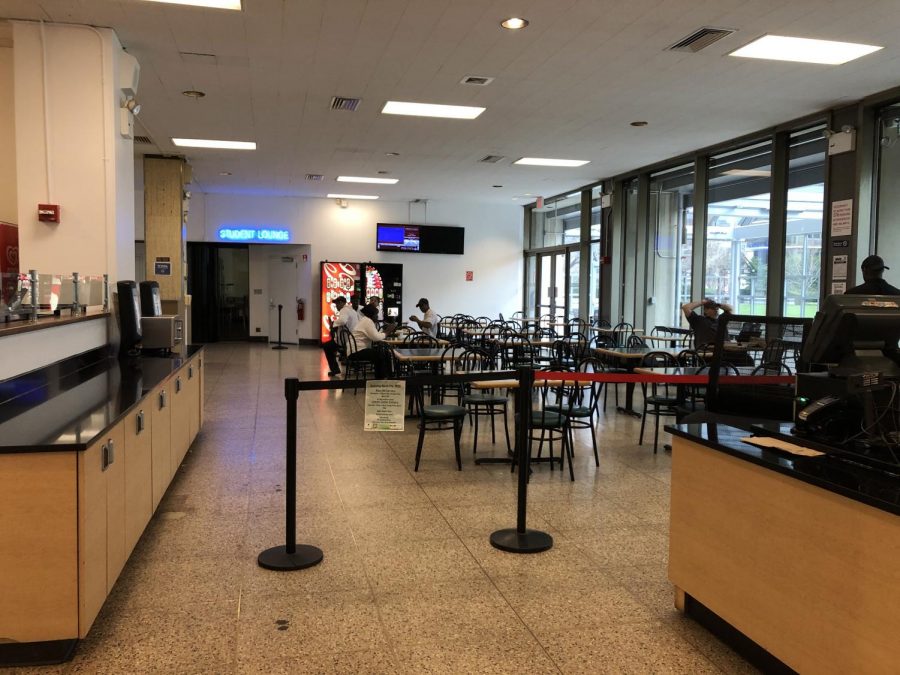 The Ram Café empty of students in March. It will continue to remain empty in the months to come as Aramark employees have been furloughed. To help relieve the financial strain on their workers, Aramark has expanded employee benefits and sick leave.

Prior to the coronavirus pandemic, Fordham’s finances were stable. Nearly two months after the school closed its doors, money is entering and exiting the institution rapidly. The dining department now lies deserted and is unable to promise employment to contract workers for the next few months, while student workers question the longevity of their employment.

Due to a score of canceled events the dining department was depending on for continued employment and profit, Dining Contract Liaison Deming Yaun does not anticipate the return of the staff until at least August. At the end of March, Yaun expected that graduation and summer conferences might still go on as planned. Looking back on what could have been, the department’s financial loss is considerable.

“Around March 11, the expected return from the dining department to Fordham and the expected income for Aramark went to zero. Our expectations for the rest of March, April and May, catering and graduation, Summer Session I and the conferences in June and July –– they’ve all gone to zero. What do you do with that? Tough decisions had to be made,” Yaun said.

Due to the increased costs from online instruction and the partial refunds, the university decided to not accept the liability of contract workers during this unanticipated crisis, according to the statement the University released on April 22.

Aramark workers being furloughed is not unique to the cooks, cashiers and servers who work at Fordham. At the University of Virginia, students petitioned their university to continue to support the salaries of the dining hall workers that were laid off by their employer, Aramark.

As a result, the University of Virginia appeased the students by issuing a two million dollar emergency assistance fund for employees and furloughed contract workers, according to The Washington Post. However, this money cannot be used to pay any recurring expenses such as credit card bills or child support.

To mitigate the effects of the coronavirus, however, Aramark extended employee benefits through the end of June, added 21 days of sick leave if their employees fall ill and guaranteed them their previous positions when Fordham reopens facilities.

Contract workers include “employees of firms (vendors) with which Fordham has contracts for goods and services,” Howe said. For Fordham, this mainly includes personnel in Public Safety and Dining Services.

This classification of workers are not directly employed by the university, and therefore, Fordham said that it is “not possible … to accept financial responsibility for its vendors’ employees.”

Fordham also reimbursed over half a million in dining dollars, a process that began in early April and is set to be completed by mid-May. Students who were on mandatory meal plans are receiving 50% of their dining dollars back, while students on voluntary meal plans already had carryover policies in place.

Coupled with the Office of the Provost releasing their plan for the fall semester on May 11, planning for Dining Services in the fall has also begun, according to Yaun, although new policies have not been announced yet. Restaurants on campus will most likely have “socially distant” seating, a form of protection between the customers and staff, and Yaun said there will be a likely increase in student use of the food delivery app Grubhub.

Another key part of the Fordham workforce is its student workers, who faced a period of uncertainty regarding the status of their positions in late March. Federal work-study student employees are still receiving checks through the end of the academic year, which the Office of Student Employment announced in March.

However, due to the lack of internships available this summer, students may be seeking continued employment as student workers. Bernadette Sutton, senior assistant director of student employment, confirmed the university’s plan to continue paying students who choose to work during Session I of summer courses, which will be conducted remotely.

“The most difficult part of spearheading student employment during the pandemic was compiling all the data necessary to provide the best outcome for our student workers. We are currently working on our summer employment placement process and will begin planning for the Fall in the upcoming weeks,” she stated.

According to an email sent to student workers on May 12, only students who have “work from home access” can participate in the summer work-study program for Session I. Session II is still set to proceed on campus, but the university’s decision is contingent on Gov. Cuomo’s mandate.

As of now, no adjustments or changes have been made to the fall session of student employment.