Students Share the Perks of Pets During the Pandemic 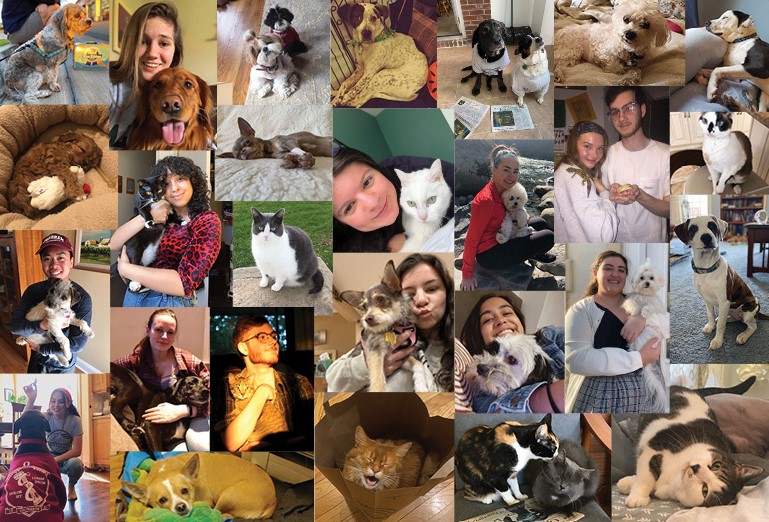 The pets of the Fordham community.

It’s a conversation often heard on the Plaza and in the dorms: students regaling their (human) friends with stories of their furry friends back home, sometimes accompanied by a photo — or 20 — of the pets they miss.

Since higher education institutions have shuttered and transitioned to online learning to slow the spread of the coronavirus pandemic, millions of students have unexpectedly gotten a lot more time at home with their pets — and as city and state governments worldwide have enforced restrictions on travel and in-person contact, pets have become some people’s primary source of companionship and comfort.

“I think my dog is actually keeping me sane,” said Jordan Wappler, Fordham College at Rose Hill ’22. “She is always up to play and truly has a kind heart.”

Wappler lives in Seattle, Washington, one of the first locations of the coronavirus outbreak in the United States. As such, Wappler’s community had been on extra high alert, and people were encouraged early to social distance to an exceptionally high degree. Gov. Jay Inslee issued a stay-at-home order on March 23, which has now become the norm across the country.

“I have only been in physical contact or proximity with my dog, sister and dad,” Wappler said. “I am a big extrovert, so being with people is what fuels me emotionally.” For the time being, she has taken to regularly hiking with her dog, Lisbon, which she had never done before — she previously undertook the activity with friends.

This kind of routine has benefits, according to Jeffrey Ng, director of counseling and psychological services at Fordham. He said the responsibilities of pet ownership, including regular walks and a consistent sleep schedule, promote physical health even prior to the pandemic.

During social distancing, people can become more attuned to both the physical and emotional benefits of time with their pets in the face of loneliness and uncertainty, even if they don’t normally experience these feelings.

“Pets can provide their owners with unconditional love/attention and physical affection, which positively influence mental health and well-being,” Ng said. “Spending time with pets can also promote experiences of ‘being in the moment,’ which is a protective factor for depression and anxiety.”

Ng’s analysis is supported by multiple studies that suggest the benefits of pet ownership. BMC Psychiatry’s 2018 review of 17 studies on the topic found that 15 reported some positive effects of pet ownership on subjects with existing mental health conditions.

The review’s summary of these studies said, “Pets were able to provide unique emotional support as a result of their ability to respond to their owners in an intuitive way, especially in times of crisis and periods of active symptoms.” It continued to say that pets provide physical companionship and opportunities for communication, which can reduce loneliness.

Although there is anecdotal evidence for the benefits of pets, some studies have concluded that the health of pet owners can potentially be worse, or else on par with, that of non-pet owners. Nine of the studies cited in the BMC review returned some negative effects, including the sadness that comes with losing a pet.

Some studies in a 2011 report of multiple international studies on the topic suggested that pet owners were at a higher risk for a range of physical and mental health issues. A comparable amount of studies cited in the report found no discoverable difference in the emotional health of pet owners and non-pet owners. One, an American study by the Pew Research Center, found “no differences in the proportion of pet owners and nonowners who described themselves as ‘very happy.’”

Though empirical data on “the pet effect” is inconclusive, students are nonetheless finding their pets a positive resource, especially in the time of the pandemic.

Ana Paula Camacho Pérez, formerly Fordham College at Lincoln Center (FCLC) ’23, has experienced this firsthand. The Mexico City native said her dog, Laika, has helped her through “moments of anxiety” toward both the government’s and her family’s handling of the pandemic.

The amount of cases in Mexico is low compared to countries like the U.S. — 27,634 as of May 6, according to data from Mexico’s Health Secretary — but has been continually rising since March, and Mexican president Andrés Manuel López Obrador was initially slow to cancel large gatherings and impose tight travel restrictions.

On a smaller scale, Camacho Pérez said her family has also continued to go out for both work and pleasure, including her grandmother with preexisting health conditions. Camacho Pérez has sought refuge on her back patio, sitting with Laika and taking in the sun when she feels helpless to do anything else.

“I couldn’t vent out or go see (my grandmother) to stop her, so I think in those moments Laika really helped me calm down,” Camacho Pérez said. “I also think it’s been good for her as well, because she used to be a stray dog so getting more love from us has really helped her heal from what happened to her.”

Kamila Vahidi, FCLC ’23, has had a similar experience with her cat, Snowy: “My cat has been sleeping with me every night since I came home, which he never used to do. I am definitely more conscious of him now that I am home all the time.”

Increased companionship, as Camacho Pérez and Vahidi suggested, is a two-way street. However, it is temporary. Isabella Frassetti, FCLC ’20 — who said her main source of socialization has been weekly FaceTime sessions with her friends and all their dogs — worries about what effects this period of closeness will have on pets’ mental health. She said she has been careful to give her dog, Eloise, space from time to time.

“I’m not sure what’s going to happen when life goes back to normal,” Frassetti said. “A lot of dogs have anxiety so it’s a good thing that we let them have some alone time so they don’t develop a dependency and become nervous when we leave to go to work or school later on.”

In the meantime, pets are more involved in their owners’ lives now. Students can make the best of it by indulging in a longer-than-usual walk, spontaneous fetch session or in-person photoshoot — to have ample new material to show your friends when you’re back on campus, of course.