Lightening the Mood in Liminal Space 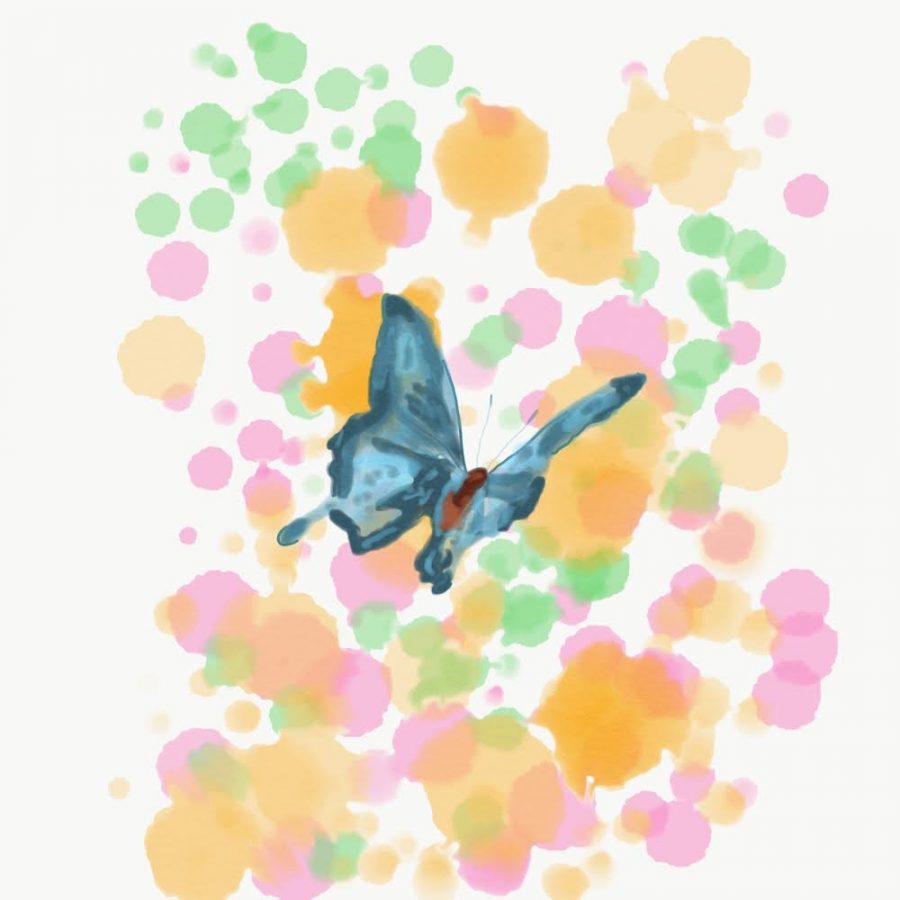 By CAITLIN BURY and CLEO PAPADOPOULOS

Cleo Papadopoulos and Caitlin Bury, both Fordham College at Lincoln Center ’22, discuss the artistic adaptations and contributions occurring during this time of uncertainty and confinement. Papadopoulos and Bury study new media and digital design, and visual arts, respectively. In addition to creating art within their respective major classes, the two also express their creativity outside the classroom with their own work.

Cleo Papadopoulos (CP): Normally I work with things that I’ve been doing on a day-to-day basis. So, everything that’s new is something I can use in my art. I mostly use my film photos from the rolls I’ve shot and developed. I’ll make collages with it on my walls or I’ll do it digitally on Photoshop. I can’t shoot film now because I’m in quarantine, so I’m working with older material. Regardless, it’s very mild, calming artwork. It’s something I like to do for fun.

Caitlin Bury (CB): All of my stuff comes from my personal experiences. They always say, “Write what you know” or variations of that ––

CB: Exactly. But now, it’s more about looking back. And I think you’re doing something similar. It feels like we’re in this artistic, liminal space.

So, I’ve been trying new artistic techniques that I haven’t really tried before because I didn’t have enough time to get better at them, or I didn’t have the resources.

CP: I’ve been trying to use Adobe more than I used to because a lot of my stuff was more physical. But I don’t have access to the materials I normally work with. It’s all very limited, but also kind of not, because it’s something that I haven’t done before. So, it might be better to look at stuff like that, but honestly, it’s just kind of sad looking at everything and not having anything new to work with.

I feel like the art that I’m making now is such lighthearted work because it’s such a downer all the time. I don’t feel like people understand the reality of what it’s like to live here in New York (right now). I haven’t gone outside since March 9. The only thing I really like doing in my free time is looking back at photos with my friends from the school year and making fun little collages and color palettes with them.

In my freshman year, I read a book on colors. It was called “Pantone: The 20th Century in Color,” and it defined each decade by its own color palette based on the events that occurred. Ever since, I’ve been thinking more about how colors influence our lives, and now, I view the world more in color. And so, when I look at the photos of my friends, I draw on the colors I remember from those moments. Those are the colors that defined the year.

CB: What you were saying about making your art feel very light right now speaks to how artists create with a response to something. So, for example, if a movement is happening then an artist will respond to that within their art. I feel like that’s what you’re doing –– what a lot of people are doing. I mean, you can even scroll through YouTube and different television shows have been doing table reads on Zoom to respond to the current moment and bring back this lightness. So, I feel like that’s what we’ll be seeing a lot of. It may not necessarily be new or groundbreaking art, but I really feel like people are just trying to lighten lives right now.

So, if I draw an egg for a friend. For me, it doesn’t mean something more ––

CP: Doesn’t have a deeper message ––

CB: No deeper message with a drawn egg. It’s just that my friend likes eggs and I want to make her smile. During this time, there can be art with greater messages. However, we don’t need to pressure ourselves to be the next Shakespeare who’s writing “King Lear” in quarantine. To be fair, we’re all still students. We have a lot of homework every night and Zoom classes, so we don’t have to expect that from ourselves. We can only expect ourselves to do whatever we need to do to lighten the mood. Whether that’s creating art, like we’re doing, or documenting a new subject ––

CP: I’m glad that you said that because I feel like the work that I’m making is so lighthearted that it’s almost … stupid? And it might be, honestly, but if it’s something that makes me happy then it’s worth making.

People have been posting things about New York as it used to be. The city is very open and loving, and from the confines of quarantine, that’s what people are remembering. And then people are posting about what it looks like now: very dreary –– lights on, but nobody outside. When I look at that, it makes me feel worse. But, it’s beautiful and it’s something that we should look at because it’s probably never happened in the history of New York. For me, if I look at something now, I want to be happier when I look at it.

CB: This goes back to an earlier part of the conversation, but I was just thinking about where inspiration comes from right now. There are no life experiences to draw from. I feel like I’ve turned to other things for inspiration. Instead of looking at a film from a renowned director or photographs from my favorite photographers or art from The Met, I’m looking at things that are more DIY or homemade –– that could be a YouTube video or things that my friends are putting out. I feel like some have regressed to very DIY ––

CB: I think it’s just working with what you have. And maybe it’s about being back in your childhood home or a place that feels like that. Potentially it’s about feeling younger again and looking back to the things that inspired you at that age.

CP: It’s about reminiscing about a simpler time. It all looks like a dream and it makes me super happy to think about.

CB: It speaks to the fact that art really is what people turn to, no matter what. I’ve been seeing this post being shared on social media that says something like: Think about the television shows, the movies, the music, etc. Think about that –– that’s art and you’re turning to it during this time. So don’t discount artists.