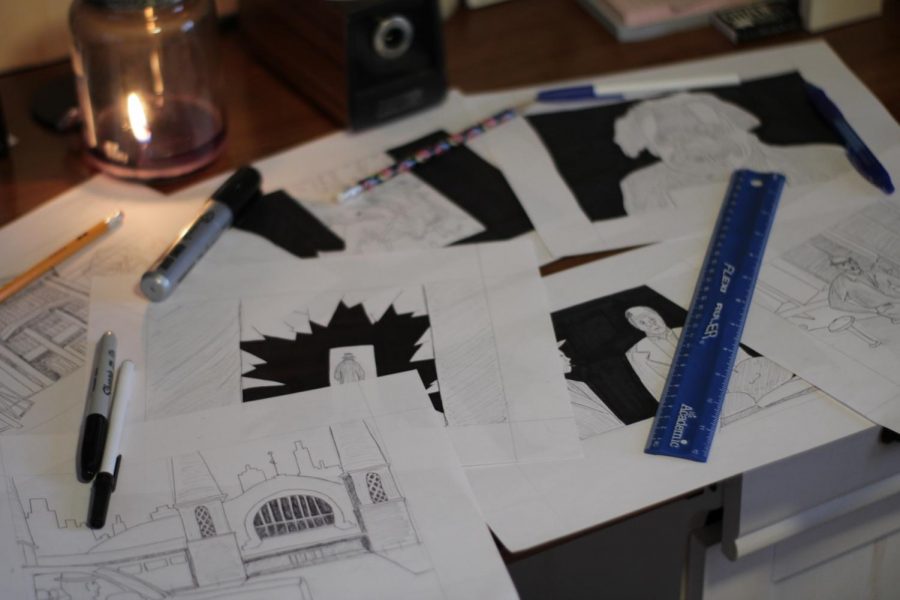 Prompted to think about their given situation, members of Filmmaking Club work to express their creativity through films in quarantine.

As the nation practices the new norm of social distancing, many Fordham students are finding comfort in media and creative expression. Members of the Filmmaking Club are working hard to remain connected while using this time to create film content inspired by their isolating conditions. Amid canceled festival plans and virtual meeting adaptations, the club continues to prepare for its end-of-semester Fordham Film Festival.

“We’re encouraging our members to stay as connected as possible by still roughly keeping up our screenwriting workshop,” club Vice President Ryan Shearin, Fordham College at Lincoln Center (FCLC) ’21, said. “People can send in whatever they’re working on and get some quick feedback and connection in this time.”

Club President Tommy Cunningham, FCLC ’21, explained that the club’s online meetings have generally maintained the same structure as its regular in-person gatherings. “We normally go around the club in a circle and people chat about what they’re working on or how they’re doing,” he said. “These days it’s even less structured than that and we mainly just hang out for around an hour.”

Cunningham is unfazed by the greater lack of structure, even saying that it helps “in keeping with the general ethos of the club.” He elaborated, “It’s a space where people feel comfortable around other filmmakers and I’m happy we can continue virtually.”

Shearin added to this point by discussing the club’s upcoming plans to hold casual get-togethers. “We’re working on organizing some unofficial time together to watch films using Netflix Party/things like it so we can all have a good distraction and conversation,” he said.

Still, there have been unavoidable detriments for the club caused by the unexpected changes of recent months. “The biggest loss is the potential for guest speakers at meetings,” said Cunningham. “Earlier this semester we had director Brady Corbet come in and we have had other industry professionals in the past. I’m trying to work on getting some virtual guests but things are understandably tricky at the moment.”

Moreover, not everyone has access to the required tools needed to make films. Normally, members can use equipment supplied by the Filmmaking Club. This new remote reality poses a hurdle for people left without their usual filmmaking gear.

Despite a decrease in meeting attendance, Cunningham remains optimistic. While usual club meetings attract 35 to 50 people, he said that virtual meetings only have an average of 10 attendees. “Either way,” he emphasized, “it’s nice just to see some folks.”

Club member Koty Vooys, FCLC ’22, appreciates that the virtual meetings allow people “to share scripts and continue to work on things from home.” An active participant since fall 2019, he is grateful for the presence that the Filmmaking Club has in his life, even amid the uncertainties.

“The thing that I enjoy most about it is getting a chance to develop as a filmmaker alongside others who are also just beginning to create films,” Vooys said. “Everybody is really supportive and for people who are unsure of whether they can or should make things, I think it provides an incredible opportunity to explore and experiment.”

Members like Vooys have been using their new free time to focus on filmmaking. “Going back home has actually given me more time to make things with my friends from high school,” he said. “I’ve started 2 weekly series on my YouTube channel and made probably around 10 – 12 shorter videos.”

Vooys, along with the rest of the Filmmaking Club, was looking forward to taking part in the group’s biannual festival this semester. Previously referred to as the “48-Hour Film Festival,” the event was renamed this semester as the “Fordham Film Festival” due to new plans for it to be held at Film at Lincoln Center. Because of the current circumstances, the in-person event was forced to be canceled.

“My goal with this club is to leave it in a better place than I found it because it has meant so much to me,” Cunningham said. “I think any and all collaboration with Film at Lincoln Center is a great stepping stone and however disappointing this semester may be, I’m confident we will hold it there next semester.”

The club is still determined to host a successful virtual version of the event this year, set to take place on Thursday, April 23 at 8 p.m. ET over Zoom. It is expected to be an informal gathering of club members to watch submitted pieces.

“Given that I have no idea how many people will tune in and everybody is dealing with their own special circumstances it won’t be more than us hanging out on Zoom and me sharing my screen to show whatever films get submitted,” Cunningham said.

With the cancellation of Fordham’s on-campus semester, many Filmmaking Club members realized that their previous plans for potential film festival submissions would no longer be possible. “Originally I was going to film a 20 page short film I wrote for the festival,” Vooys said, “but after school got shut down the project kind of went down the tubes.”

Even with the recent changes, members are using this time to stretch their imaginations and let their creative juices flow. Some have referenced the impact of social isolation within their pieces. Cunningham supplied the group with a loose prompt to “use their current set of limitations to think creatively.” Though Vooys said he doesn’t have anything set in stone for the festival, he’s been able to produce more content from home in new ways.

By sticking to a creative routine and following personal deadlines, Vooys has found himself creating movies he never expected to make.

“I just recently made a video that consisted of pictures of stick figures that I drew myself which kind of looks like an animatic,” he explained. “This lets me tell any story that I can draw without having to rely on a cast or really anything other than my imagination.”

In past semesters, Fordham students have also participated in the Campus Movie Fest (CMF), the largest student film festival in the world. Cunningham described CMF as a “3rd party initiative that travels the country and does week-long film festivals at different universities including Fordham.” During this festival, students are given all the equipment needed and a week of production time to create whatever five-minute film they can conjure.

Though Cunningham said Filmmaking Club members are always encouraged to participate in CMF, he does not know of any participating this year.

Unfortunately, due to the current global situation, CMF was faced with a situation similar to that of the Filmmaking Club, leaving its participants without equipment and having to cancel its in-person screenings.

Although they have been forced to make some serious changes to their schedule, CMF is still hosting an online contest for Fordham students that began on April 8, with the film submission deadline on April 14. A digital premiere of the top student films will take place on April 23 at 7:30 p.m. ET. The prompt, like Cunningham’s for his own club’s festival, suggested that the student participants submit works relating to life in social isolation.

CMF has also faced the challenge of operating with transparency and accessibility for quarantined students. Filmmaking Club Treasurer Caitlin Bury, Shannie Rao and Gill Kwok, all FCLC ’22, submitted a film to CMF last year and were ranked in the top 10. About CMF during quarantine, Bury said she was “pretty unaware” that the festival was still occurring.

“We were really excited to put something together again this year with our little team,” she said, wishing it had been more advertised.

Daniel McBride, Fordham College at Rose Hill ’20, whose CMF submission was screened in Keating Auditorium his freshman year, also said he “had no idea” that CMF was still taking place this year. He reached out to the organization to see if it was still possible to submit a piece he has been working on in quarantine even though the deadline has passed.

CMF hopes to resume regular school touring in the 2020-21 school year and will continue to update its site with any news about upcoming programs.