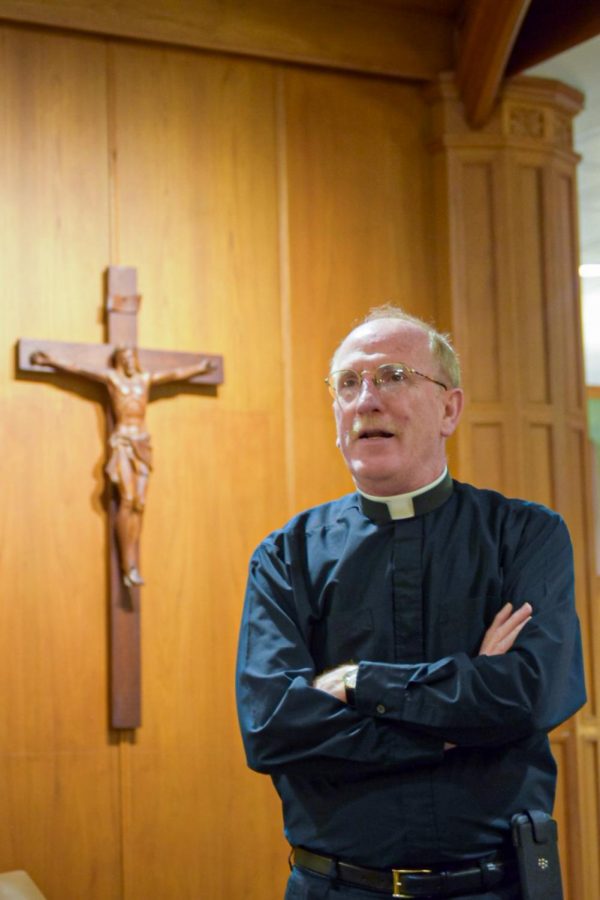 University President Rev. Joseph M. McShane, S.J., has highlighted the communal bonds among all those in the Fordham community in his weekly emails.

University President Rev. Joseph M. McShane, S.J., is an elusive figure on campus. He is often seen at university Masses or celebratory occasions, but the Fordham community rarely hears from him directly on a regular basis.

With the outbreak of the novel coronavirus and the indefinite cancellation of university Mass, McShane has been sending pastoral messages to the Fordham community in an effort to provide comfort. The support of the “Ramily” consists of students, faculty, staff, alumni and even parents.

On March 15, McShane addressed the Fordham community directly, bearing the news of a solemn historic event: For the first time in the university’s 179-year history, Mass would not be celebrated on any of the university’s campuses after Cardinal Dolan suspended public Masses in the Archdiocese of New York until further notice.

According to Bob Howe, assistant vice president for communications and special adviser to the president, McShane felt the need to send out these messages due to “The needs of the moment: the University family is unsettled, in many cases scared, and feeling isolated. Father (McShane) is not merely the chief administrator at Fordham, but the community’s Pastor-in-Chief, a responsibility he takes very seriously.”

Finley Peay, Fordham College at Lincoln Center (FCLC) ’20, saw McShane’s intention and consideration for his community throughout his rhetoric. “I think just the time he’s taking to address all of us and the fact that his emails all seem to be so honest and emotional is wonderful and comforting. Sometimes it feels like he’s able to put into words some of the same emotions I’m feeling,” she said.

For alumni, McShane’s messages serve as nostalgic comfort. “I can literally hear Father McShane’s voice as I read them and it carries me back to happy memories at my favorite place on earth,” Sophie Scott, FCLC ’18, said.

In his first message, McShane recited a prayer for all impacted by the coronavirus. He concluded that this message is directed towards families of “all faiths, and none.” While it is obvious that McShane’s message carries a pious directive, he makes it clear that his sentiments are not exclusive to Catholicism.

Stella Pandis, FCLC ’21, expressed how emotional she felt, regardless of her religious affiliation. “I am not Catholic and his words always move me. Father McShane has done such an amazing job to make it a spiritual experience/read rather than a religious one,” she said.

As Fordham is a Jesuit institution, religiously driven language isn’t unknown to its students. “I think we have to understand that as a Jesuit this is how he sees the world and expresses himself. He seems to so genuinely care about each of us, and I think that intention transcends faith and religious beliefs,” Peay added.

Rev. George Quickley, S.J., chaplain at FCLC, reflected on his own experience as a pastor in Nigeria. He remembered how his job was to unite his parishioners, no matter the ethnic or spiritual background they may have come from. As the pastor of this university, McShane’s job is no different.

The Jesuit values that Fordham preaches to its students are not only applicable on campus. Quickley emphasized that during this time, being “men and women for others” is more important than ever. “We may be powerless, but there are many tools that we have that can move us to do something for those who are already suffering.”

In his third pastoral message on April 5, McShane discussed the upcoming holidays, including Holy Week and Passover. Candidly, he admitted that each year, this week comes with a sense of dread and excitement due to the emotional rollercoaster it evokes. However, this year, his feelings are different.

“Normally, I would enter the Week in the company of a great throng of other believers and be buoyed up, consoled, and strengthened by their faith … But this year and this Holy Week are anything but normal … We will enter it and walk through it in a solitary way,” he wrote.

Michelle Moughan, FCLC ’23, noted that her family’s celebrations were vastly different than years past. “We typically go to some type of service on Palm Sunday, the days of the Triduum and Easter, so it’s been strange to have to watch a Mass online or do our own thing at home,” she said. McShane’s messages have highlighted that she and her family are not alone in navigating this unconventional Holy Week.

McShane’s messages aren’t unique to the current global crisis. Howe stated that in the past, such messages have been sent during times of great celebration, such as momentous university occasions and significant religious holidays, or in times of great tribulation. But some members of the community have expressed their interest in these messages beyond such polarizing situations.

A leader must adapt in order to fulfill the needs of his people, and that is what McShane is trying to do through his pastoral messages. Keeping a small community spread out all over the world together is no small feat.

“I have spoken to students from other Jesuit universities and public schools and their schools are not taking the same efforts. I am glad Fordham has not forgotten the concept of being a Ramily,” Pandis said.

So we are in this together, Ramily. Apart, and yet united, through our community.