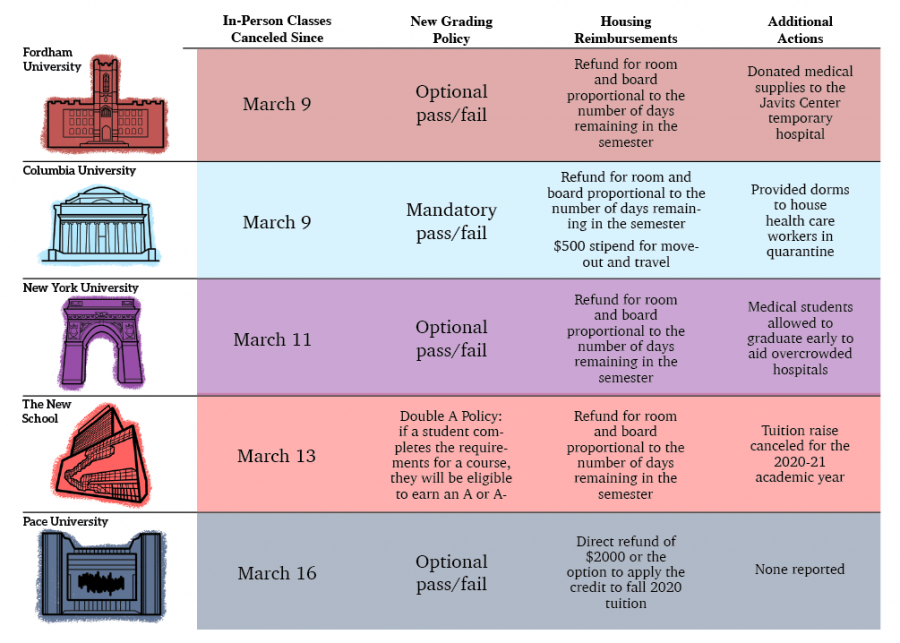 The coronavirus pandemic has brought American college life to a complete standstill as universities were forced to close and students to finish the semester online. NYC schools were some of the first to respond to the coronavirus (COVID-19) outbreak by suspending face-to-face classes and canceling in-person events. When Gov. Andrew Cuomo signed the PAUSE executive order, they were forced to close completely.

Now, NYC universities are beginning to address student concerns that accompany the completion of the spring semester online — including financial reimbursement.

On March 31, Fordham University announced that it plans to issue reimbursements for room, board and selected fees by approximately 50% for the spring 2020 semester. The policy is prorated, meaning the refunds for room and board are proportional to how many residential days were left in the academic calendar when students were sent home.

“All things considered, I think Fordham has handled it better than we expected,” Angel Quiah-Londoño, Fordham College at Lincoln Center ’20, said. “Their response to COVID-19 has been to be preemptive and not regret inaction.”

According to Vice President of Communications Bob Howe, all campus buildings except the Westchester campus are in operation, requiring heat, electricity and water service — even without students on campus. Howe also said that no university employees have been laid off and that the university is absorbing all technology and support costs associated with the transition to online.

Other colleges in the NYC area are tasked with the same challenge as Fordham when issuing refunds. Columbia University was one of the first in the country to move to online-only classes.

“The administration not only responded early and decisively but also in a way that was really empathetic with how this would affect students, especially those without safe places to return to and graduating seniors,” AJ Yablonsky, Columbia ’20, said.

According to Yablonsky, they reimbursed housing costs similarly to Fordham with a prorated policy, as well as student life fees for the remainder of the semester. The university also gave students a $500 stipend to move out and assist with travel.

Yablonsky said that students who could not move out were allowed to stay in dorms through the end of the academic year. Columbia is also providing dorms as housing for health care workers to quarantine in, so they do not spread the coronavirus to families and also to reduce commute time.

Keili Fitzgerald, New York University (NYU) ’23, said she has not had an in-person class since March 10, similar to Fordham, which suspended face-to-face classes on March 9.

In a letter to parents of NYU students on April 4, President Andrew Hamilton wrote that the university is distributing housing and meal plan refunds proportionately, similar to Fordham and Columbia. He also stated that NYU is “closely examining various fees to determine if they should be refunded as well.”

“One of my friends got $5,500, so I’m assuming they’re giving about 50% back for housing,” Fitzgerald said. “We haven’t received the amount for course fee refunds but I feel like it’ll also be 50%.”

Fitzgerald said that she thinks it is fair reimbursement, however, she is in art classes that lost substance when going digital and wished they were just canceled and refunded.

Some NYU students have been allowed to remain in housing, but they have been moved into single rooms without visitor privileges, Fitzgerald said. Students whose belongings were left in the dorms are either having their items mailed to them or moved to storage.

Pace University followed a similar trajectory as Fordham, transitioning to a two-week online period on March 16, then making the decision to stay online for the whole spring semester midway through the first week, according to Leila Pollio, Pace University ’22.

“No COVID-19 cases were reported on campus until a week after the closure, so I think they did the right thing by closing before it had the chance to spread through the school,” Pollio said.

Pace is adjusting housing fees by directly paying families $2,000 or giving them the option to apply the credit to fall 2020 tuition. “I believe this is helpful, but in the end, students are still paying the majority of their housing tuition without even being on campus,” Pollio said.

Pollio is a commuter, so the housing fee adjustment does not apply to her. Her tuition remains the same for the semester.

“I felt super thankful to be a commuter for the first time, not having to (panic) about whether or not I would be $10,000 in the hole for housing I wasn’t using, or travel expenses thrown at me out of nowhere,” said Ryan Garcia, Gabelli School of Business ’23.

“It would have been nice to have received some kind of reimbursement, but it also works out for me now that I don’t have to commute anymore,” Pollio said. “By not having to pay for metro cards all the time, I am already saving money, even though I’m not receiving any kind of refund from Pace.”

Like Fordham, many Pace students left campus only prepared for two weeks of online classes. All further move-outs have been delayed indefinitely due to the PAUSE executive order, but Pace did say they will make “limited exceptions for urgent needs.”

The New School announced during spring break that the rest of the spring semester’s in-person classes would be canceled. According to Dasha Balashova, The New School ’23, many students who either live outside of the U.S. or did not have the resources to travel back to move out were not well-prepared to continue classes from home.

“When other schools were steadily closing, we kept going to class as if nothing was happening,” Balashova said.

New School students are receiving prorated refunds for housing and meal plans. Additionally, financial holds are not affecting the ability to register for fall 2020 courses.

Students of the Parsons School of Design within The New School created petitions for partial tuition reimbursement with the slogan “online art school is not art school.” Balashova said that the university denied this request via email, but they did cancel the tuition raise for the 2020-21 academic year.

In comparison with Fordham, which instituted an optional pass/fail policy, Columbia made it mandatory, not giving students the choice to opt out. “They instituted the policy for reasons of academic inequity, which I think is a really interesting choice that has a lot of merit,” Yablonsky said.

Instead of implementing a pass/fail grading scale, The New School is using a Double A Policy, meaning that if a student completes the requirements for a course, they will be eligible to earn an A or A-.

In response to the rapidly evolving outbreak in NYC, NYU medical students were allowed to graduate early to become practicing doctors and help alleviate overcrowded hospitals. Fordham has also aided the wider city’s battle against the coronavirus by donating medical supplies to the Javits Center temporary hospital.

All five schools plan to hold the 2020 fall semester on campuses in NYC, even with predictions of a fall resurgence of the coronavirus. Fordham confirmed that events such as new student orientation are still planned to be held in-person in August, but there is a contingency plan in place to conduct the programs using technology if the pandemic continues.