The Art of Theater-making Through Social Distancing: An Unfinished Story 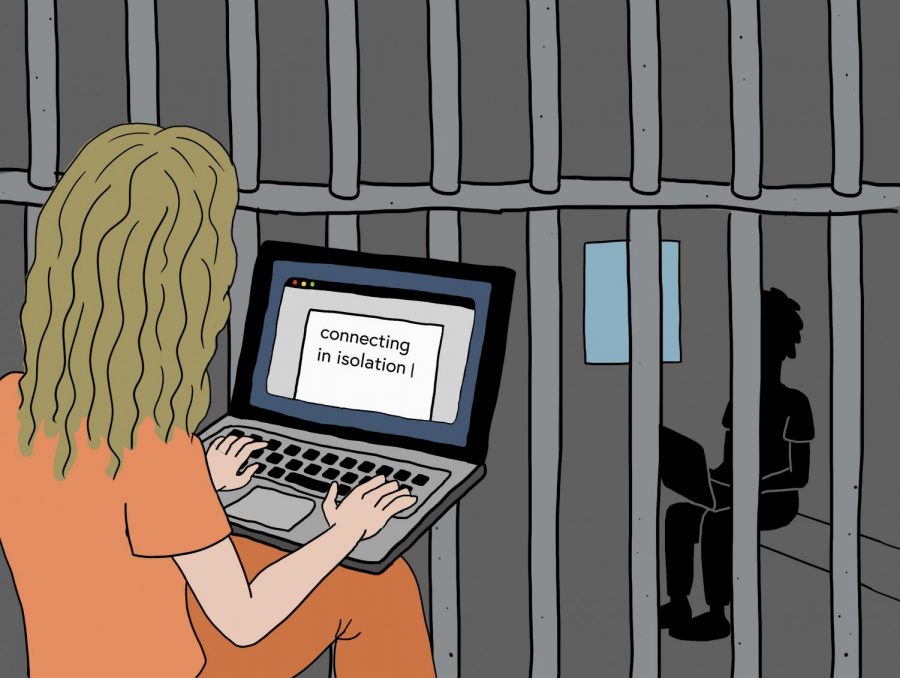 What happens when a play is entirely reliant on audience participation, but this semester’s studio show audience is spread across the world? As Fordham’s student body has been sent back home due to the coronavirus, theatre students still struggle to find ways to digitize their work.

“The audience is an integral part of the storytelling — the play couldn’t actually happen if the audience members were not present,” said playwriting major Daria Kerschenbaum, Fordham College at Lincoln Center (FCLC) ’21, of her show “The Epistolary Play,” which was supposed to be performed from April 23 to 25.

For students like Kerschenbaum and her director, Kaylie Groff, FCLC ’20, creative plans for the show were just getting started the week students parted ways. Their collaboration for “The Epistolary Play” had to change course as students started going online.

The play is centered around four people in two prison cells. In each cell, there would be one performer and one audience member. Their job was to communicate and write letters to one another — creating commentary about how to communicate through physical separation.

Ironically, this show is about social distancing and how to maintain conversations with someone when you’re not in the room with them. The staff of the show learned this firsthand when trying to communicate through the mayhem of the coronavirus.

When Fordham first went online on March 11, “The Epistolary Play” was scheduled to have its first rehearsal. They still held it remotely, and the students behind “The Epistolary Play” figured out Zoom with ease. During that first virtual rehearsal, the cast read through the script, and there were presentations from the design team.

As everyone was sent back to their childhood bedrooms to socially isolate, and spring break began, Groff and Kerschenbaum kept in contact with the theater department to see what the future would look like for “The Epistolary Play.”

Communicating across time zones has created a challenge for both the staff and students within the department. With everyone separated, it was hard to gain clear answers for the future of the studio shows this season. Aside from “The Epistolary Play,” two other shows were also in the works: “Madeline May Saves the World” by Alexis Chapin, FCLC ’21; and “Savonarola” by Vivian Brown, FCLC ’22.

“As of right now all three plays will be performed in the studio season at a later date which is yet to be determined,”  said Stefanie Bubnis, interim managing director of Fordham Theatre.

Elizabeth Margid, head of the directing program at Fordham, provided slightly different answers regarding the future of the studio shows.

“My understanding is that ‘The Epistolary Play’ is happening next year,” Margid said. “I’m not sure about ‘Madeline May Saves The World’ or ‘Savonarola’ because I haven’t had a conversation with those writers about what they want to do.”

For theatre majors, studio shows are an integral part of their major fulfillment requirements. All staff from the theatre department assured that students’ grades will not be impacted by the postponement of shows. Though answers of when the performances are happening remain unclear, students have confidence in the progression of their majors.

Through the uncertainty, theatre students still remain adamant about sharing their art. Chapin said she is interested in having a Zoom radio play session. The show is not yet chosen, but many theatre students are working together to figure out the logistics.

Chapin made it clear that the radio play is open to any student regardless whether they are a part of the theatre program or not. She said, “Radio plays were something that happened in the ’30s during the Great Depression to boost morale and have a sense of community during under times.”

With the whole Fordham community living day by day, artists have found it essential to keep creating. The future is unclear, but for now, Fordham’s theater community holds onto a strong sense of hope in the healing power of their craft.

“The lovely thing about the theatre department … is that they are all really engaged and willing to reach out across these distances,” Groff said.