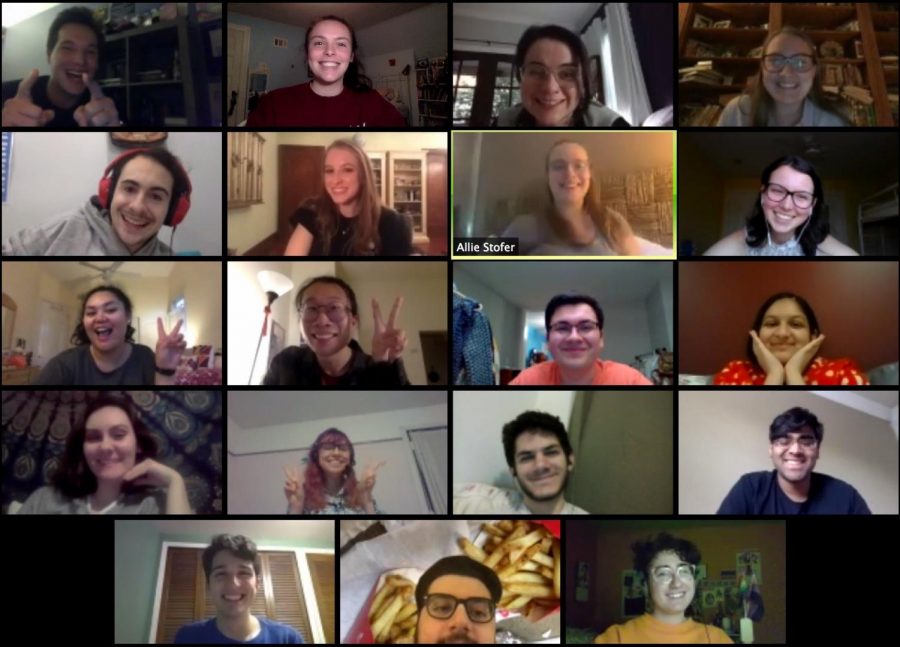 On an average Wednesday night, the members of Stove’s Cabin Crew would have convened for their weekly meeting, acting out rough drafts of sketches and doing improvisation exercises to prepare for their next show. But since all of Fordham’s operations have moved online, on Wednesday nights now … that’s still exactly how you’ll find them.

Stove’s was one of the first clubs to jump headlong into the new digital norm. Its members performed their March 11 feminist comedy show via Instagram Live, days after Fordham first canceled all campus activities. The club has made the show available on YouTube and plans to put on its end-of-semester show via Zoom at the end of April, and as such continues to hold club meetings on the platform with little change to its fundamental content.

That’s not to say Stove’s hasn’t had to learn to adapt, but they have been able to modify just about all their usual activities — and found unexpected benefits in the changes. The ability to annotate screens, change display names and set virtual backgrounds on Zoom opened up new sources of comedy. At the April 1 meeting, Stove’s President Maddy Casale, Fordham College at Lincoln Center (FCLC) ’20, shared a sketch about a professor who mocks a student for what he believes is a fake bookshelf behind her, but fully believes in another student’s “travels” to Hooters and hell by way of changing his background.

Robert Sundstrom, FCLC ’22, noted that Zoom allowed for more efficient feedback sessions. “We usually finish out our meetings now with people reading different sketches or stand-up that they’ve written,” Sundstrom said. “We’ve been sharing our screen, so you can actually follow along with what the person’s written.”

But perhaps the most defining hallmark of the club’s new normal is “Zoomprov.” Casale pioneered the digital adaptation of the club’s standard improvisation exercises in response to Fordham’s suspension of in-person classes for the rest of the semester.

“When we asked if people would want to keep meeting at our usual time to kind of pretend there’s some sort of normalcy, everyone was very down,” Casale said. “We weren’t really sure what we could do … but I thought that a form that you could do in person that maybe you could try here was (improvisation).”

In lieu of tapping each other in and out of scenes as they would in a physical space, they turn their cameras on and off to signal their entrances and exits. Once they nailed down the logistics of that, Casale said, the exercises went smoothly. Sundstrom and former Vice President Emily Krichmar, FCLC ’21, both said the experience has forced them to listen to each other better during scenes, which they will take back to the club when it resumes in person.

“You don’t have this blocking or physical indicators of where a scene is,” Krichmar said. “When it’s your time to come in, when there’s times when somebody’s talking to you, it really improved my own listening skills in improv that I want to incorporate.”

The past two weeks of Zoomprov have included scenes set in Denny’s, the beach and the bread aisle of a grocery store, to name a few. Another followed a household under quarantine who received an unexpected visit from two “brother husbands” whose wife kicked them out.

“That was a whole part of the scene — counter-social distancing,” said Krichmar, who played one of the husbands. “We’re trying to incorporate this whole situation of corona(virus), self-isolation into our improv because comedy, you should just use what you know.”

The first “trial-and-error” Zoomprov session, which has since been posted on the club’s YouTube channel, took place over spring break. Club members prepared a PowerPoint presentation for Vice President Andy Vega, FCLC ’20, to present to them as though he was a professor in a virtual class — only he did not see the presentation before having to work with it.

According to Stove’s Treasurer Natalie Grammer, FCLC ’21, that session took 40 minutes because people kept messing with each other. Multiple Stove’s members echoed that the nature of the club — as a friend group as much as a formal organization — created a smooth transition. Besides regular meetings, Krichmar has organized virtual game nights and other social activities for the club members.

“I kind of expected to lose some of that warmness that we had for the first semester when we moved online, but if anything, I think it’s probably increased,” Sundstrom said.