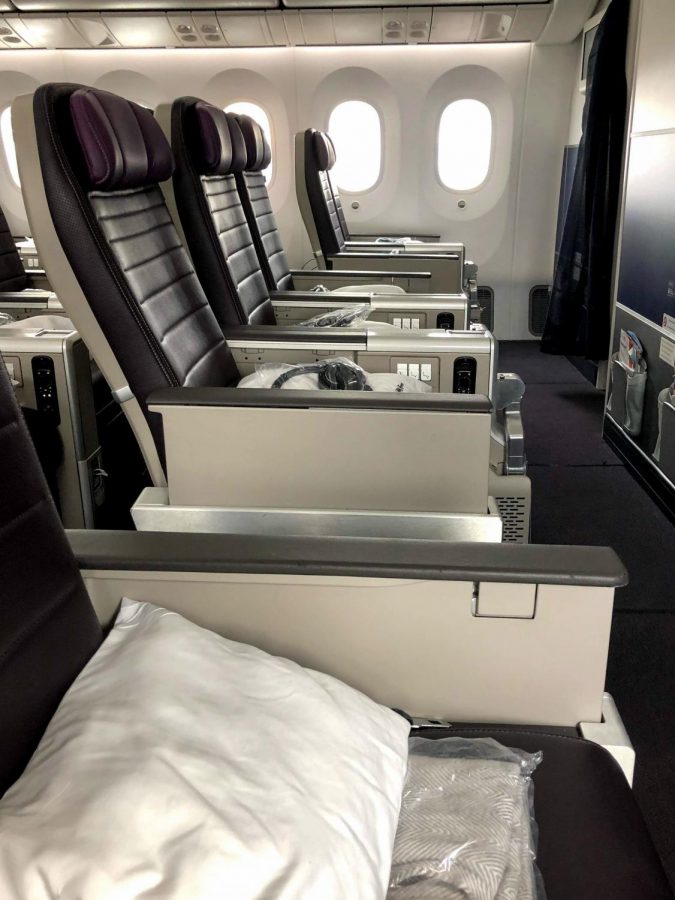 Shamim reported a near-empty flight back to the U.S. when he had to leave his study abroad program in Germany.

The global coronavirus pandemic has forced world leaders to implement travel bans or close their countries’ borders to try to contain the spread of the virus. These changes have affected thousands of travelers around the world, including the Fordham students who had chosen to study abroad for the spring 2020 semester.

Shortly after that, Donald Trump announced that he was expanding the European travel ban to include the United Kingdom and Ireland, which would go into effect on Monday, March 16, at midnight. The ban barred foreign nationals from entering the United States, but ensured that U.S. citizens and their families would still be able to return home.

Students enrolled in separate study abroad programs not affiliated with Fordham University received an email on March 12 asking them to return home immediately. All study abroad students were asked to enter their flight information and return address into a Google Forms document created by Fordham’s Study Abroad Office.

Returning to the U.S.

When he first received the news, VanGostein and his friends originally planned to continue with their spring break travel plans, but “the situation kept getting worse and worse every couple of hours.”

“All the news was intensified and we kept getting updates from different people. So we didn’t know what was just a rumor and everyone was panicking,” VanGostein said.

When London staff sent an email to students stating they should book a flight immediately and leave as soon as possible, VanGostein and his parents decided to book a flight back to New York.

VanGostein received a call from his parents and realized he had accidentally booked a flight home to JFK on Sunday, March 22, only one day before all students needed to leave the U.K.

“Trying to change my flight was a disaster. The website kept crashing. I used the phone at the London Centre because I was out of U.K. minutes on my phone. Matthew Holland (director of student affairs for the London Centre) was around and checking up on people. I ended up having to book a whole new round trip because it was cheaper than a one-way.” VanGostein’s flight home cost 1,400 pounds, about $1,743 USD.

Ethan Shamim, GSBLC ’21, was studying abroad at the WHU-Otto Beisheim School of Management in Vallendar, Germany, when he was asked to return to the U.S. Although Germany had one of the highest numbers of reported cases at the time, Shamim said that life was continuing fairly normally.

Shamim was able to book a flight easily to get back to the U.S. He said that while the airports were functioning normally, he did notice that some of the shops were closed and that there were noticeably fewer people.

On March 18, Shamim flew from Frankfurt to Newark on a Boeing 787-10 plane with 330 seats, but he claims that no more than 50 people were on his flight.

During the flight, Shamim received a health form from the Centers for Disease Control and Prevention (CDC) that asked him some questions about his health and where he had been and gave him information on how to quarantine for 14 days.

At this time, there were reports of U.S. airports that were overwhelmed by an influx of people traveling home. “My dad told me that I should be prepared for a five-hour wait for additional screenings being performed at the airport,” Shamim said.

After his flight landed, Shamim said that he went through additional border control security and had his temperature checked by a contactless thermometer. He was able to leave the airport within an hour.

Not all students studying abroad felt returning to the U.S. was the right choice for them. Gabrielle Stewart, Fordham College at Lincoln Center (FCLC) ’21, was studying abroad in Vienna, Austria, when Fordham students were recalled back to America.

Stewart said that Austria was taking preventative measures very early and that citizens were following them diligently, so she felt very safe in the city and in the country. When she approached her adviser at the University of Economics and Business, he assured her that it would be fine to stay in Vienna and continue her online learning and that she would need to communicate her decision with her university in the U.S.

“My mother and I both wanted me to stay in Vienna because of how well the country was doing to counteract COVID-19 and that I had already paid for my housing through the semester and was bound by a contract,” Stewart explained.

Further, Stewart’s mother was exhibiting symptoms of the virus and they both felt like it did not make sense for Stewart to travel through international airports to a household that had potentially already been exposed.

When Stewart emailed her concerns to Fordham’s Study Abroad Office, they maintained that she must return to the U.S. regardless of her situation. They also told her that she would not receive any credit for the semester if she chose to stay in Vienna without their permission.

Likewise, students studying abroad at Fordham’s center in Pretoria, South Africa, felt that it would actually be safer for them to stay rather than return to the U.S..

“There were significantly less cases in South Africa than the U.S., and we felt like traveling through international airports to head back home to houses with older relatives and young siblings was not going to help anyone,” said Gabe Samandi, FCLC ’22 and news editor emeritus.

On March 16, students studying abroad in Pretoria received an email requiring them to leave the country by March 23, giving them only seven days of warning. Fordham uses South African Airlines to transport students between New York and Johannesburg and instructed students to book new flights on the airline to get back to the U.S.

“We had to book flights on our own and that was very cost-prohibitive for a lot of people,” Samandi explained.

Then, on March 20, South African Airlines canceled all flights. “I had a direct flight for that Friday, and then all of a sudden the airline canceled everything,” Samandi said. Forced to find alternatives, Samandi flew from Johannesburg to London, and then to New York.

For some students like Zoey Liu, FCLC ’22 and photo editor emeritus, there was not an obvious answer as to where to go after she was told to leave. She was studying abroad at the London Centre when she was notified she had to leave.

In Liu’s case, her parents moved to Japan after her high school graduation, meaning she had nowhere to go home to in the U.S. With the closure of all Fordham residential halls, the cost of finding somewhere to stay in the U.S. eliminated the possibility of traveling to America.

At that time, there were more cases of coronavirus in Japan than in the U.S. Liu was concerned about her own safety traveling to a country with so many cases, as well as travel bans that could render her stuck in Japan for an unforeseeable amount of time.

Liu also has Taiwanese citizenship, but everyone she knows there lives in a multigenerational household and since she had been traveling around Europe, she did not feel comfortable going to stay with them.

When Liu went to Matthew Holland with her concerns and to ask for help, she claimed that Holland and the Fordham London Centre administration were not prepared to support students with special travel cases like herself.

Faced with no support from Fordham, Liu chose the most financially viable option to travel to Japan to be with her parents.

Liu headed to Heathrow Airport in London, where she flew to Bangkok, Thailand. Officials took her temperature in Bangkok, and she was successfully able to transfer flights to Tokyo, Japan.

David Hernandez, GSBLC ’21, was studying abroad at Freie Universität in Berlin, Germany, when he received the email asking him to leave.

Hernandez was in a program with 150 other students, and he said that people began leaving as early as mid-February due to concerns about the coronavirus. “Other students had slowly been leaving, but we hadn’t heard anything and Germany was still a level one travel advisory so we thought we were fine,” he said.

“Then, all of a sudden I get an email past midnight on Wednesday night telling me to leave immediately. It took us all by surprise,” Hernandez continued.

Not wanting to return to the U.S., Hernandez chose to fly to his mother’s house in Madrid, Spain, on Sunday, March 15.

Only one day earlier, on March 14, Spain enforced a national lockdown, as it was the third most infected country in the world at the time. Hernandez is at home waiting for the lockdown to be lifted; he is only able to leave his mother’s house to go to the grocery store, pharmacy, or hospital.

Freie Universität moved to online classes on March 30, but Hernandez says that since he had to leave so unexpectedly, he was unable to take any of his midterm exams.

“I can’t take any of the tests unless I have a proctor, but all of the universities here are closed and none of us can leave our houses unnecessarily anyways. So now I can’t take any of my midterms until things reopen here and I can start looking for proctors,” Hernandez said.

Finishing the Semester in Quarantine

As the semester continues, study abroad students have expressed concerns about how they will be able to continue their classes.

To try accommodate different time zones, the London Centre decided to put all class materials online in Powerpoints for students to access on their own times and weekly hour-long discussion meetings via Zoom.

Now quarantining in Texas, Samandi is unsure about what his classes will look like when they resume. If the University of Pretoria chooses to host online classes, he and his classmates have expressed concerns about time difference and how that will affect their ability to be involved.

Stewart’s classes are now Powerpoints that she is expected to go over on her own time and self-teach; “this is something I did not anticipate and I believe it will pose a challenge for me and my personal learning preferences,” she said.

Navigating group projects online has also introduced new challenges. Stewart explained that her “group members are from Madrid, Milan, and Salzburg so we have had to be conscientious when scheduling times to go over assignments.”

None of the students interviewed received any financial support from Fordham for last-minute travel costs. There has been no communication from host programs or from Fordham’s Office of Study Abroad about tuition or room and board reimbursements.