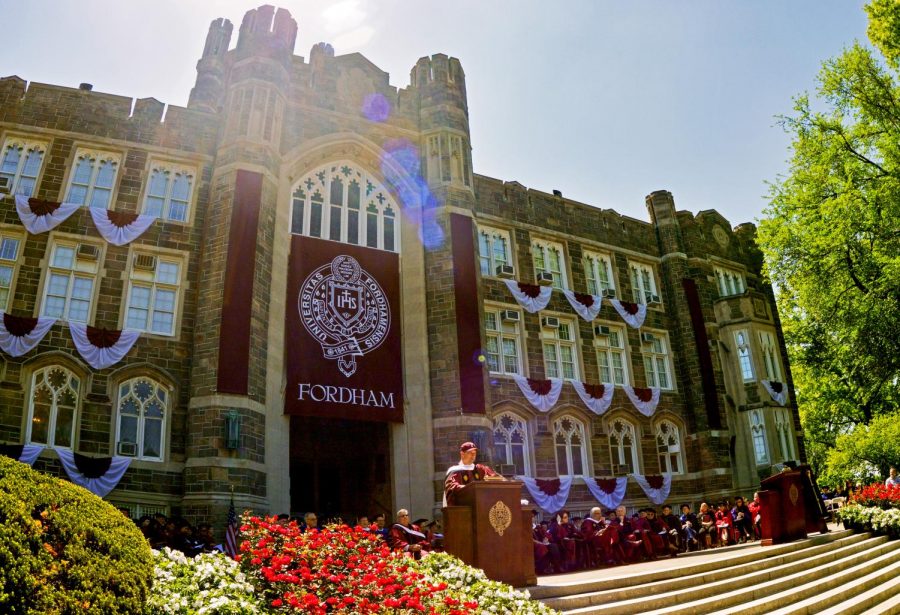 Tino Martinez delivers the commencement address on the steps of Keating Hall in 2014. This year's Commencement was originally rescheduled for fall 2020, but has now been further postponed to 2021.

“It is my sad duty to inform you that we are postponing the 2020 University Commencement and diploma ceremonies because we cannot assume it will be safe to bring together the graduates, their families, and the campus community in May,” wrote University President Rev. Joseph M. McShane, S.J., in an email to the Fordham community on March 27.

The news was announced after a series of Fordham event cancellations, including the suspension of all face-to-face classes and growing concerns about the spread of coronavirus in the United States.

McShane wrote a separate email to all graduating students to share the news and offer his sympathy and support to the Class of 2020. He also announced that Fordham will livestream a small ceremony on May 16, the planned date for commencement, as well as the Baccalaureate Mass on May 15. Seniors will receive more information about virtual events in the following weeks.

While graduating seniors expressed their disappointment at the news, many said that they understood the decision as the Centers for Disease Control and Prevention has encouraged all mass gatherings of more than 50 people in the next eight weeks to be postponed or canceled.

“While everything that’s happening is, yes, unfair to the work and achievements of the Class of 2020 at Fordham and in schools all over the world, it’s necessary to understand that this is part of a much greater picture and in the best interests of containing the global health crisis at hand,” said Julia Britto, Fordham College at Lincoln Center (FCLC) ’20.

Finley Peay, FCLC ’20, said that she appreciated that “the university is doing the best they can to commemorate the occasion and give us all our due.”

McShane stressed that the 175th commencement ceremony has not been canceled but postponed for a later date.

“While it’s disappointing news, I was actually a little bit relieved,” said Matt Jordan, FCLC ’20. “Other colleges are doing online graduations so I was relieved to see that they are just postponing it,” he said.

Purdue University, the University of Pennsylvania and Johns Hopkins University are among other colleges that have been forced to move their ceremonies to virtual celebrations.

“I promise you that when we gather to toast you in-person on Edwards Parade, we will do so under the banner of your class: the Dodransbicentennial banner, the same banner that hung on the facade of Keating Hall when you began your Fordham journeys and the same banner that will welcome you home for your reunions,” McShane wrote to conclude his email to the Class of 2020.