‘Onward’ Struggles to Move Forward, But It Will Still Make You Cry

“Good” is not a great review for a big well-established studio with millions of dollars in funding. 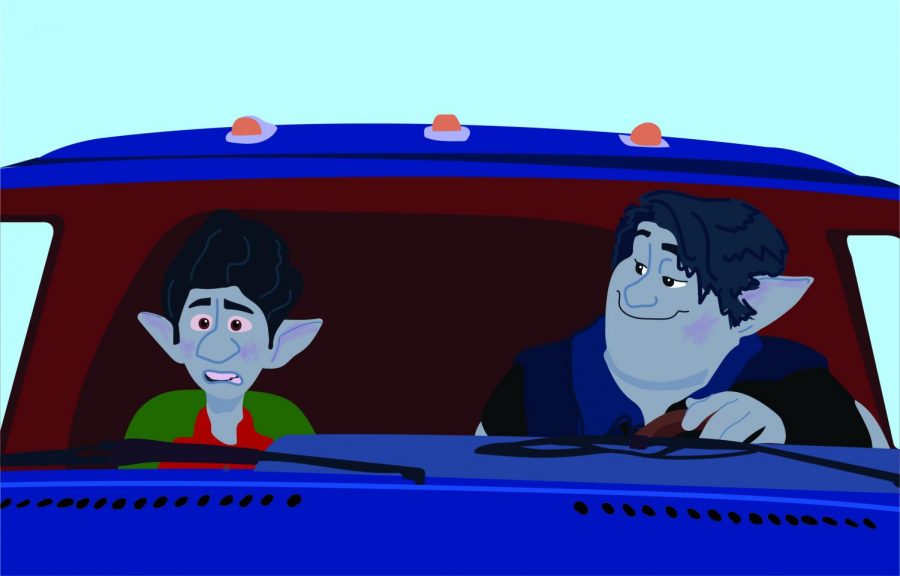 Does every good Pixar movie need to have a dead parent? My friend who accompanied me to the theater would say yes without hesitation. That evening, he probably set a record of tears shed in a movie theater. I, too, had fun watching “Onward”; however, I was not impressed with its attempt to bring something new to the already full animation table.

“Onward” is a story of two elf brothers, Ian and Barley. They live in an urban fantasy world, where mythical creatures exist within a modern-like setting. There is a darker side to the story: because of technology, everyone has lost their magical powers. On his 16th birthday, Ian accidentally partially resurrects his dead father, and he, Barley and their dad’s legs embark on a quest to complete the spell. The caveat is that they only have 24 hours to do so.

This plot will seem meta even to an unseasoned viewer. Is Disney trying to tell us that the new renaissance of animation is soon to come? A bold statement, considering how the majority of big-screen Disney content we get these days are either sequels that, while being entertaining stories, rely on our nostalgia (“Finding Dory,” for example), or are live-action remakes of the classical Disney era that fail to live up to their predecessors. More importantly, is “Onward” good enough to start the revival it advocates? Not really.

“Onward” sells us everything that Disney and Pixar are good at: extensive and immersive world building, likeable and unique characters that make us experience the full spectrum of emotion, and a couple of tear-jerking moments sprinkled on top — Barley’s monologue of how he regretted not saying goodbye to his father nearly got me. However, does “Onward” add anything new to the equation? It certainly tries, but it doesn’t try hard enough.

Let’s start with Ian and Barley. Voiced by Chris Pratt and Tom Holland, they are certainly loveable. However, they still very much represent the white suburban boy demographic that we have been seeing in film and television over the past century. Yes, they are elves, but the stars that voice them automatically encode them as white.

Disney is known for trying to increase the cultural diversity in its films, with “Coco” as one of its recent successes. “Onward” tried to go down a similar path and introduce the first openly lesbian character, Officer Specter. Whilst the decision was praised by some media outlets, the LGBTQ+ community felt understandably cheated. Officer Specter only appeared for 10 minutes in the movie, and the only line related to her sexual identity was in passing, probably so that anti-LGBT countries, such as Russia and China, could easily cut out the unwanted bit or get rid of her character altogether.

The women in this film on the whole are “fearless warriors” but still mostly reduced to secondary characters. The characters in this movie are predominantly male, leaving little room for identification for its female audiences. Are Disney movies still split into princess and non-princess?

Yes, “Onward” is family-friendly fun that makes tears well up in your eyes. If you’re a Dungeons and Dragons or Magic the Gathering fan, you’ll probably enjoy and appreciate the game references. You might find the expectation vs. reality trope of magical creatures living in a modern-like world hilarious. But “good” is not a great review for a well-established studio with millions of dollars in funding. Pixar, you can do better.