Splinter Group Ventures ‘Into the Woods’ 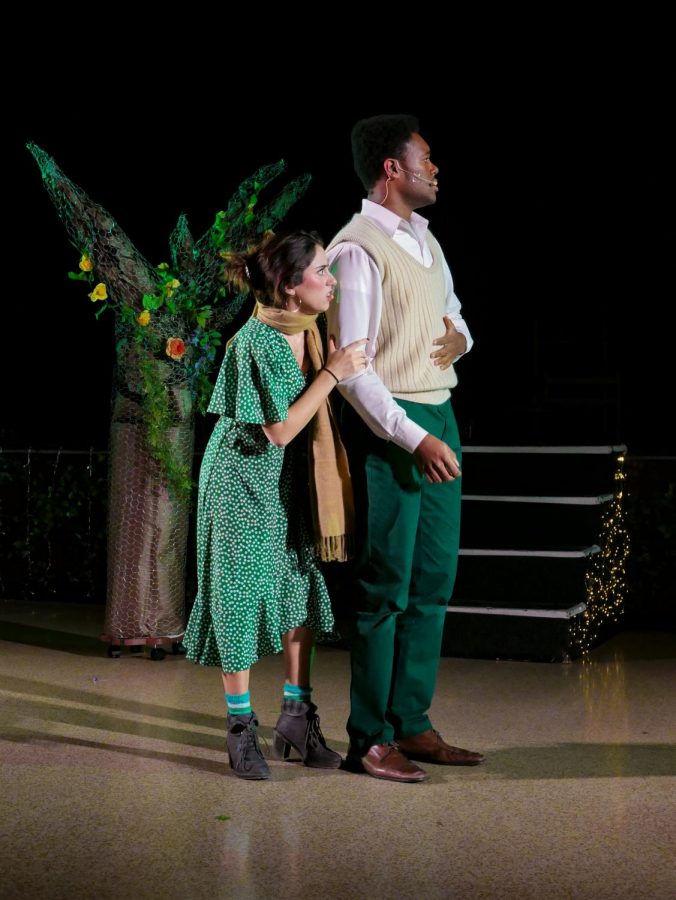 Samantha Rizzo, FCLC '22, and Jackson Lewis, FCLC '23, played the Baker's Wife and the Baker in "Into the Woods."

Fordham Lincoln Center’s Splinter Group performed “Into the Woods” on March 5 and 6 to a crowded Pope Auditorium.

The Brothers Grimm inspired musical “Into the Woods” is a combination of classic fairy tales with a twist. The story follows a baker and his wife who hope for a child, and Jack (of Jack and the Beanstalk), who wishes his cow would give some milk, ultimately selling her for some magic beans to hopefully solve his problems. When a curse is placed on The Baker by the town’s evil witch, the couple decides to go “into the woods” to reverse the curse.

“Essentially, you are met with all of the classic storybook characters and they all have desires that they selfishly will do anything to achieve,” said Lucy Murray, Fordham College at Lincoln Center (FCLC) ’23, who played Sleeping Beauty and The Young Witch. “They end up traveling into the woods and trying to carry out their own journeys, but end up meeting and getting involved with one another’s lives.”

The cast, set and costumes were put together relatively quickly for a production with such a grand reputation.

“Rehearsals started in early February,” said Eliza Pagel, FCLC ’23, who played The Witch. “Early rehearsals involved nailing down the music first, because the show is really musically difficult. We then moved into playing around with staging, finding ways to tell the story that worked for us and making sure that our insanely talented cast could show off what they’ve got.”

“The week before the show, we all had rehearsal from 5 to 11 each night. It was so fun,” Murray said.

Despite being a fantasy-driven musical, the show tackles underlying issues in the fairy tale genre.

“I think that the show does a really good job of pointing out the flaws (especially the sexist nature) of a lot of the fairy tales we grew up with. I also really enjoy the way in which the show uses all of these characters to weave their stories together and make complex relationships between them all,” Murray said.

It was clear from speaking with the cast just how tight-knit the group was. Pagel gushed about her fellow performers’ talent, saying that her favorite part of the rehearsal process was “just getting to hear and watch the other actors in the show. Just to listen to Jackson (Lewis, FCLC ’23) sing ‘No More,’ David (Wilson, FCLC ’21) sing ‘Giants’ or watch Austin (Wedderburn, FCLC ’22) and Orlando (Whitcomb-Worden, FCLC ’22) kill their character roles was really just a joy.” Support for the other actors was at the forefront of the process.

The combination of a tight-knit cast, exceptional talent and a whimsical plot drew an enthusiastic audience; Friday’s performance saw a packed house.

Splinter Group’s last show of the academic year was a showstopper.