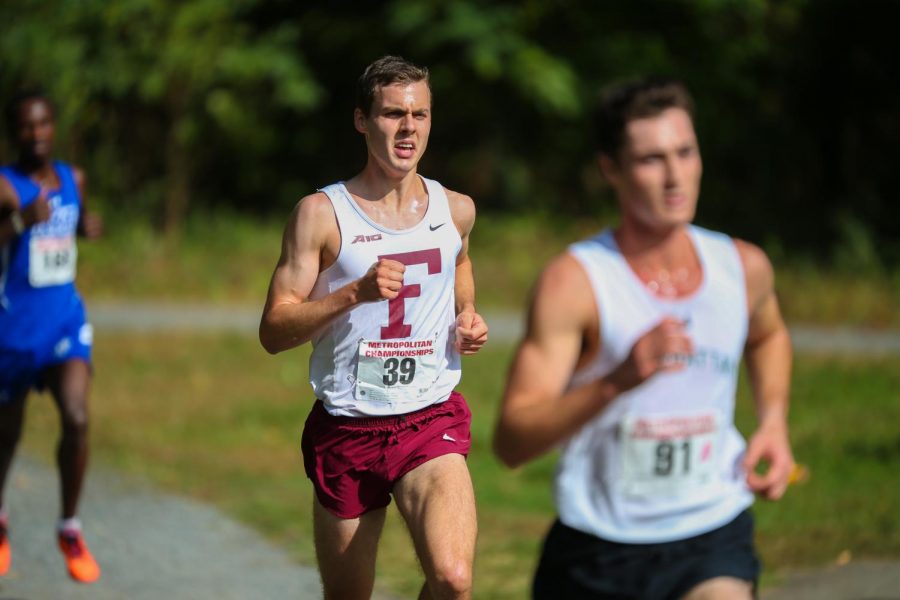 Slattery was consistently a strong competitor for the Rams during his time at Fordham.

Running a marathon is no easy feat. Finishing three marathons in three months is significantly more difficult. The task is even more impressive when the first of the three is a debut in the distance — and the third took place at the U.S. Olympic Marathon Team Trials.

That is what Tom Slattery, Gabelli School of Business at Rose Hill ’18, has been up to for the past three months.

Slattery had an impressive four-year career on the cross-country and track team during his time on the Rose Hill campus, but excelled particularly during his senior year.

That year, Slattery was a two-time Metropolitan Champion, first in the 8K cross-country race with a time of 25 minutes, 32 seconds, and then over 3,000 meters indoors in 8 minutes, 25 seconds. Later that indoor season, Slattery broke Fordham’s 33-year-old record in the 5,000 meters by 15 seconds when he crossed the tape to take first place in 14 minutes flat at the IC4A Championships. At the end of the 2018 season, he raced for the first time over 10 kilometers.

Although Slattery primarily raced across distances that ranged from the mile up to 5 kilometers in college, “he was a big mileage person,” Dewey said.

Slattery agreed that his high weekly mileage played a part in his preparation and decision to attempt to qualify for the Olympic Trials.

“I had run over 100 miles a week in college before, and higher weekly mileage is typical of marathon training, so I wanted to give it a shot since it was the Olympic year,” Slattery said.

He planned to make his marathon debut last spring at the Ottawa Marathon, but a strained calf two weeks before forced him to pull out of the race. For his first unsuccessful marathon attempt, Slattery endured 90- to 110-mile training weeks which included solo runs of up to 27 miles. Struggles with that training regimen nearly convinced Slattery to give up on his post-collegiate running career.

Once Slattery moved to the Upper West Side near Central Park, he gave the sport a try again and began to work out with the New York Athletic Club. He then decided to pursue the California International Marathon (CIM) in Sacramento, California, with the goal of qualifying for the Olympic Trials. The race took place on Dec. 8, 2019, just over a month before the window to qualify for the trials closed, which took place in Atlanta, Georgia, on Feb. 29, 2020.

The qualifying standard for men to punch their ticket to the trials was to race under 2 hours and 19 minutes. Slattery clocked an outstanding time for his first race over 26.2 miles but unfortunately came in just 9 seconds over the standard.

“This was incredibly devastating, since I had been gearing up for that moment throughout that entire year,” Slattery said.

Though Slattery expected this to be his last attempt at the qualifier, a teammate who had also missed the standard reached out to say that he would attempt to run below 2 hours and 19 minutes again. This second attempt took place at the Chevron Houston Marathon on Jan. 19, 2020, the last day to qualify for the Olympic Trials.

Slattery booked a last-minute plane ticket to Houston using his available miles and found a couch to sleep on to give the standard one last shot.

It turned out that the second time was a charm for Slattery, who ran 28 seconds under the standard to finish in 2 hours, 18 minutes and 32 seconds in his second marathon ever and secured a spot on the start line in Atlanta.

“It was very surreal to think that it all came together in that one race. I went in with the mentality that I had absolutely nothing to lose, but everything to gain,” Slattery said.

He kept that mentality up until the morning of his race at the trials. The race itself tested that sentiment.

The hilly course and headwind were not kind to the participants. Slattery noticed it taking a toll on his legs and described his body as feeling burnt out. Some runners even dropped out of the race.

“Miles 20 to 25 were some of the most painful of my life, and the last mile truly took every bit of mental strength I could muster. I remember crossing the line shivering, hardly able to stand as my family and friends embraced me,” he said.

Slattery described the race as the culmination of his career, finishing in 2 hours, 32 minutes and 22 seconds. He took 152nd place out of the 175 men in the race.

“This race wasn’t about time and it felt like a celebration of all the work I put in to make it to the line and compete with the top guys in the country,” Slattery said. “Since I started marathoning, I noticed there’s been nothing but camaraderie in all the races I’ve been a part of. There wasn’t a water station when someone wouldn’t offer their bottle to the guy next to them in the group or words of encouragement when you pass someone in apparent pain. This race was no different.”

While the past mile-filled months require some generous time off, the journey to and experience at the Olympic Trials left Slattery more motivated than ever.

“I want to do everything I can to enjoy running while I’m still in these prime years and I think that calls for ambitious goals,” he said.

Three marathons in three months haven’t tired Slattery yet. Before he takes a break from 26.2, he plans to run the New York City Marathon this November. He might step down in distance after that to attempt to run some fast times on the track in the mile, but he’s already got eyes on 2024.

When it comes time to gear up for the next Summer Olympics, Slattery hopes to be healthy enough to chase the standard again with a more competitive edge.