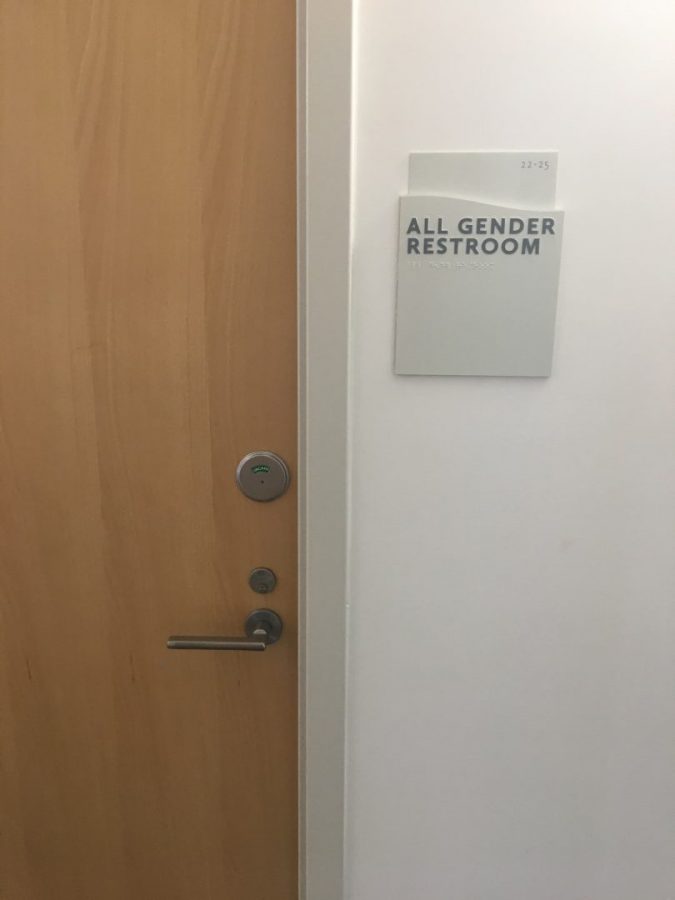 United Student Government (USG), Rainbow Alliance and The Positive pushed for inclusivity of all genders on campus by advocating for gender-neutral bathrooms, use of chosen names on official Fordham documents, and safe housing for gender-netural and transgender students.

After a five-year debate about the rights and safety of transgender and gender non-conforming students, Fordham College Lincon Center (FCLC) announced that it will offer gender-neutral housing to its residents for the upcoming 2020-21 academic year.

In the past, Fordham has only offered rooming assignments based on sex assigned at birth, regardless of students’ gender identities. The Office of Residential Life (ResLife) claimed to work on a case-by-case basis with students who inquire about their gender identity. Most often, transgender students were offered a single room in McMahon Hall as an alternative to sharing rooms.

Beginning in 2015, groups on campus including United Student Government (USG), Rainbow Alliance and The Positive pushed for inclusivity of all genders on campus by advocating for gender-neutral bathrooms, use of chosen names on official Fordham documents, and safe housing for gender-netural and transgender students.

Now, in the 2020 room selection process, students will have the opportunity to select their preferred gender identity for the housing process instead of being forced to room based on sex assinged at birth. ResLife said they will reach out to students who indicate that they would like to discuss their gender identity, and work with them on a case-by-case basis.

At a trans rights rally in 2018, student advocates accused Fordham of enforcing transphobic policies that isolate and put transgender and gender non-confirming students at risk.

Many gender-neutral and transgender students have expressed the detrimental effects of having to live with someone of the opposite gender. Aria Lozano, even wrote an op-ed for The Observer in 2018, where she claimed that Fordham’s transphobic and bigoted policies made her feel like she had to transfer to another university.

Keith Eldredge, assistant vice president and dean of students at Lincoln Center, said that he hoped the change would “make students feel more safe in their living environment.”

Jenifer Campbell, senior director of ResLife at FCLC, said that the decision is a result of a greater number of students seeking additional options compared to the students in prior years.

The Office of Student Affairs has been working with student leaders at USG, Residential Housing, Rainbow Alliance and the Positive since the Fall 2018 to discuss how Fordham could better provide gender-neutral options for students.

“The student perspective was extremely important because their insight provided the experience of those who identify as a gender-nonconforming or transgender student,” said Campbell.

Margaret Cohen, FCLC ’20, who is a member of The Positive and an advocate for gender-inclusive accommodations on campus, said that this change is a huge step forward for Fordham.

“Non-binary folks are still going to be put in vulnerable situations in this process, which won’t be resolved until there is gender-neutral housing — meaning anyone of any gender can live with anyone of any gender. Fordham is not willing to make that choice at this time despite students’ persistence that it is the safest for students of all genders,” Cohen said. “I hope to see this enacted in coming years, as it is crucial to the safety of students in navigating the already confusing and stressful process of securing housing.”

Lu Aubin, FCLC ’23 — who identifies as genderqueer and uses she/her/hers pronouns — said the change was a long time coming.

“I think it’s an incredibly important advancement in the Fordham housing policy, especially since its past is so atrocious,” Aubin said. “I am hoping that the new policy will bring me a more comfortable living space at Fordham and trust it will make the responsibility of Fordham housing easier.”

Another change in the housing application is a new question in the lifestyle question that will ask all students if they are comfortable living with a trans or gender non-confirming student. Eldredge explained that they placed, what he is referring to as the ‘“ally question,” in this section of the application process because they wanted to “normalize the question.”

However, some have raised concerns that the new change is limited. Cohen clarified that the university has not yet achieved completely gender neutral housing.

Lincoln Center housing can now be classified as gender-segregated, as opposed to sex-segregated, according to Cohen. Students who identify as non-binary will still face obstacles in the housing application process.

While there is no official Catholic doctrine on the status of transgender people, the Vatican did reject the transgender identity in a document titled “Male and Female, He Created Them,” in 2019. The Positive and other clubs have expressed that they have had to negotiate within the university’s Jesuit ideals in order to try and propose compromises.