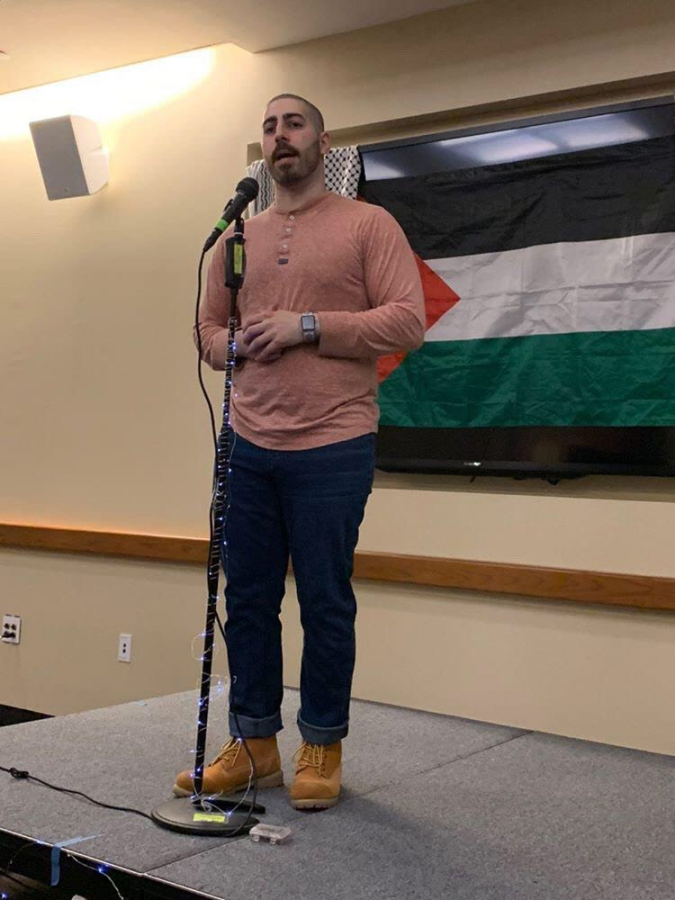 Luthun recited his poetry and allowed students to purchase advance copies of his new poetry collection, "How the Water Holds Me."

On Feb. 20, the Muslim Student Association (MSA) and Students for Justice in Palestine (SJP) welcomed students to their Palestinian Open Mic and Poetry Night headlined by Emmy-winning poet Tariq Luthun. Guests were treated to trays of knafeh (a Middle Eastern dessert made with thin pastry, cheese filling and sweet syrup), inspiring conversations about Palestinian identity and an abundance of snap-worthy poems. The event attracted a large turnout of undergraduates to Room G76A in the 140 West 62nd St. Building, leaving few seats unoccupied.

“Mainly, the goal of this event was to uplift Palestinian voices on campus,” said SJP president Batool Abdelhafez, Fordham College at Lincoln Center ’21. “So often, Palestinians are talked about in the abstract. However, we, as a club, wanted to directly honor and celebrate Palestinian art and culture through poetry and performance.”

Two Fordham students kicked off the evening by presenting their personal spoken word creations. The works of these club members (who asked to remain anonymous) touched on poignant issues surrounding race, politics and marginalization. Though the room atmosphere was initially tentative, these two powerful pieces helped warm the audience for a night of expression.

Following the opening performances, the room welcomed Luthun to the stage. Luthun currently works for “The Offing” magazine where he serves as Editor of the Micro Department. His work has been featured in numerous publications including Button Poetry, Vinyl Poetry, Winter Tangerine Review and the 2017 Best of the Net anthology. In 2016, he received an Emmy Award for his video production with the University of Michigan Health System.

Luthun preceded his first poem by speaking casually to the room about his college days, throwing in jokes and questions. He maintained this relaxed tone throughout the night between poems, welcoming commentary and encouraging reactions. His informality highlighted the intensity of his poetry due to the blatant contrast between his regular speech and his affecting writing.

From his first poem, Luthun captured the room’s attention with dynamic language and rich imagery: “What being could leap out of a seed and walk upright just long enough to inhale the dirt that will see him a man?”

The poet poised thoughtful, tragic questions like, “However will we live long enough to grieve?” Audience members leaned into the emotional depth of Luthun’s words, responding with nods, vocal affirmations and vigorous finger snapping.

Between poems, Luthun talked about the meaning of his writing and the personal experiences that inspired each piece. Childhood experiences such as picking mint leaves for his mother’s tea or being called an LGBTQ slur in a school bathroom made their way into his finished work. As Luthun explained to attendees, he uses his work to “tell the stories I want to see in the world.”

One idea that had a significant influence on Luthun’s work is family. His poems continually circled back to its themes of home, ancestry, responsibility and self, analyzing the ways they intertwine. One poem worried for his mother while another confronted his father. He expressed anxiety surrounding his parents’ traditional ideas of marriage and masculinity. In other pieces, Luthun recounted the chilling disappearances and deaths of family members due to the devastating warfare in Palestine.

The importance of Luthun’s Palestinian culture was apparent throughout the night. He spoke about his role as a community organizer and Palestinian strategist, specifically mentioning his passion for the Glia Project, which seeks to provide open-source, low-cost, 3D printed medical supplies to impoverished areas including the politically volatile Palestinian city, Gaza.

In his performance, he wove Arabic words into statements on Palestinian identity in a hostile world. One poem called “Fruit” asked Palestinian Americans to not alter their names to make the pronunciation more comfortable for others. The last line read, “This is where I come to learn why a mother gives her kin a name that lingers, a name that only we can pronounce.” Another explored the political realities of everyday life as a Muslim, citing racial profiling experiences. Additional pieces centered around Palestinian diaspora, refuge and reclamation.

“It is one thing to read literature and scholarship about Palestine, but it is an entirely different experience to actually listen to Palestinians vocalize their lived experiences as Palestinians,” Abdelhafez said.

A 20-minute break gave everyone a chance to decompress, chat and purchase advance copies of Luthun’s chapbook, a small paperback pamphlet of poems. The still-unreleased poetry collection titled “How the Water Holds Me” was named an Editors’ Selection from the 2019 Frost Place Chapbook Competition and will be released on April 21; it is available for pre-order now from Bull City Press. Luthun graciously spoke with inspired students and signed special copies of the book all while enjoying a helping of Palestinian desserts.

Following the brief pause, Luthun returned to the stage for an insightful Q&A session. Students asked the writer about a variety of topics ranging from memories of Palestine to his writing style.

“For me, writing is the process of catharsis,” Luthun said about his creative process. As a newly published author, he acknowledged the hard work involved in writing poetry, admitting he hasn’t written a new poem in the last two years. However, he emphasized the joy he feels about his book due to reasons of accessibility and longevity. As Luthun put it, “The poetry on the page will live on after we’re gone.”

Between serious conversations, Luthun entertained the audience with humorous comments on NYC pizza, college partying and sustainable water bottles. He moved through a range of emotional discussions effortlessly, maintaining his relaxed, positive attitude whether the subject matter was lighthearted or grave.

Luthun is living proof of the message he stands for: Existence is resistance. He advised members of MSA and SJP to not limit their lives to the fight for justice. While political protests are integral, Luthun reminded students to explore aspects of identity and culture outside of activism.

“Do things that fulfill you,” the poet encouraged. “Acknowledge the complete tapestry of who we are.”

Due to his passionate performance and motivating words, Luthun left many students feeling fulfilled that night. Moreover, MSA and SJP proudly acknowledged the reading’s success. “This was the most significant event SJP has had on campus thus far,” said Abdelhafez. “The turnout was incredible — it definitely motivates us to keep going.”