Pressure Mounts for Neubauer in a Game of Wins and Losses 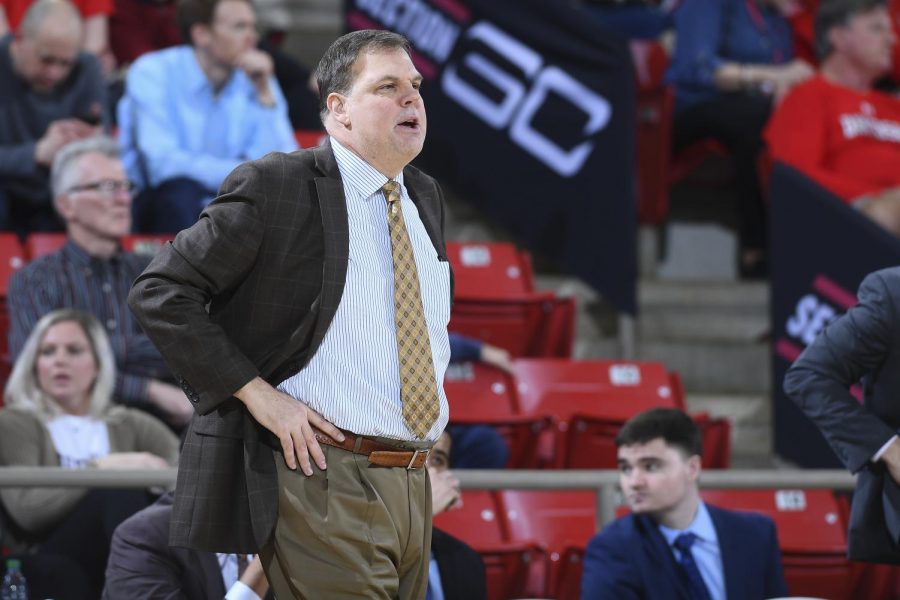 Fordham basketball fans are once again upset with Coach Neubauer after another disappointing season.

Many Lincoln Center students have never attended a Fordham men’s basketball game, but if they were to go, they would immediately make two basic observations: The auditorium is inexplicably packed, and the Rams are likely behind on the scoreboard.

But if newcomers stuck around after the final buzzer sounded, they might catch on to some smaller details. The boos become raucous in the student section and the cardboard “Fire Neubauer” signs come out. At this point, the Lincoln Center student would probably ask themselves, “Who is this Neubauer?”

Five years ago, many Fordham basketball players were asking themselves that very same question. Following the 2014-15 season, in which the Rams disappointed again with a 10-21 record, head coach Tom Pecora was fired. On March 30, 2015, Fordham hired Jeff Neubauer as his replacement,  and while few knew who he was, rudimentary internet searches were promising.

Starting out as an assistant at Richmond University and then at West Virginia University, both under head coach John Beilein, Neubauer coached on a Mountaineers team that went to the Elite Eight in the NCAA Tournament in 2005. He was hired to be head coach at Eastern Kentucky University the following season, and in 10 years with the Colonels, Neubauer had six winning seasons and made two appearances in the NCAA Tournament. He entered Fordham with 322 games of head coaching experience and a winning record over the course of his career.

When the new coach first arrived, many around Fordham expressed hope, with Rev. Joseph M. McShane, S.J., president of the university, saying, “His ability to inspire superior performance on the court and in the classroom fits well with Fordham’s mission and our culture.”

Excitement only grew when the season started. Neubauer and the Rams won nine of their first 10 games in the 2015-16 season.

Such was the buzz around Neubauer’s arrival to Fordham that the New York Post wrote a story singing his praises. In December 2015, writer Howie Kussoy told of the hard, valiant effort Neubauer had to make in his new home in the Bronx.

In his article, he said, “First, the coach had to convince the team it could be the most improved in the country. Now, the team has to convert a campus accustomed to apathy.”

At that time, it wasn’t fashionable to blame the coach for the team’s performance. Complaining about the players’ internalized insecurities and the fans’ low expectations was apparently in vogue in 2015.

Neubauer lost his first game as Fordham coach but went on to win nine straight to begin the season with a 9-1 record. They even ended with a winning record of 17-14, their first since 2007. They weren’t yet contenders in the Atlantic 10 Conference, but Neubauer gave fans reason to hope.

The year is 2020, and Fordham fans are still waiting for that second winning season.

After a few miserable years, people began to sour on their head coach, and that sentiment shows no signs of losing momentum. Anyone accusing Fordham fans of apathy has clearly never seen them boo their own coach. The intensity of their protests and the frequency of their homemade signs would be incredibly intimidating if they were directed at an opposing team.

In an interview with The Observer, The Fordham Ram sports editor Jimmy Sullivan, Fordham College at Rose Hill (FCRH) ’21, said that the fans’ protests are ones of general frustration rather than any pointed argument.

“The criticism of Neubauer is entirely results-based. The fans are seeing the numbers and responding, but it really doesn’t have much to do with in-game management or anything like that. It’s strictly a matter of wins and losses,” Sullivan said.

Fans, of course, lack specific knowledge on the duties and strategy involved with being a collegiate basketball coach. However, the opinion of the masses is incredibly important, despite their ignorance of all the factors. Fans’ protests put pressure on people in power to make changes, and understanding that opinion is more important than understanding any nuanced argument.

In his interview, Sullivan also gave a few reasons for Fordham to give Neubauer another year.

Because Neubauer has one year remaining on his contract, Sullivan noted, “Letting him go before the end of his contract will cost Fordham money.”

Sullivan also said, “While the results aren’t there, the team has played hard for him … Say what you want about the schedule or the talent on the roster, but the team has played its a– off for the majority of the season, but they just haven’t gotten results.”

Of course, both of Sullivan’s arguments have merit. From the very beginning, Neubauer garnered a reputation for getting the most out of his players, as noted by McShane when the coach was hired. The logistics of his contract may also extend his career at Fordham, at least for one more season.

But the decision will always come down to wins and losses, and in that sense, Neubauer’s position only becomes more precarious as time goes on.

For the oblivious Lincoln Center student sitting in that angry, packed Rose Hill student section, to understand Jeff Neubauer’s career, they would have to look back at five seasons of dashed hopes, disappointments, missed opportunities and lapses in judgment.

To understand the end of Neubauer’s career, though, they may not need to look much further than the scoreboard.