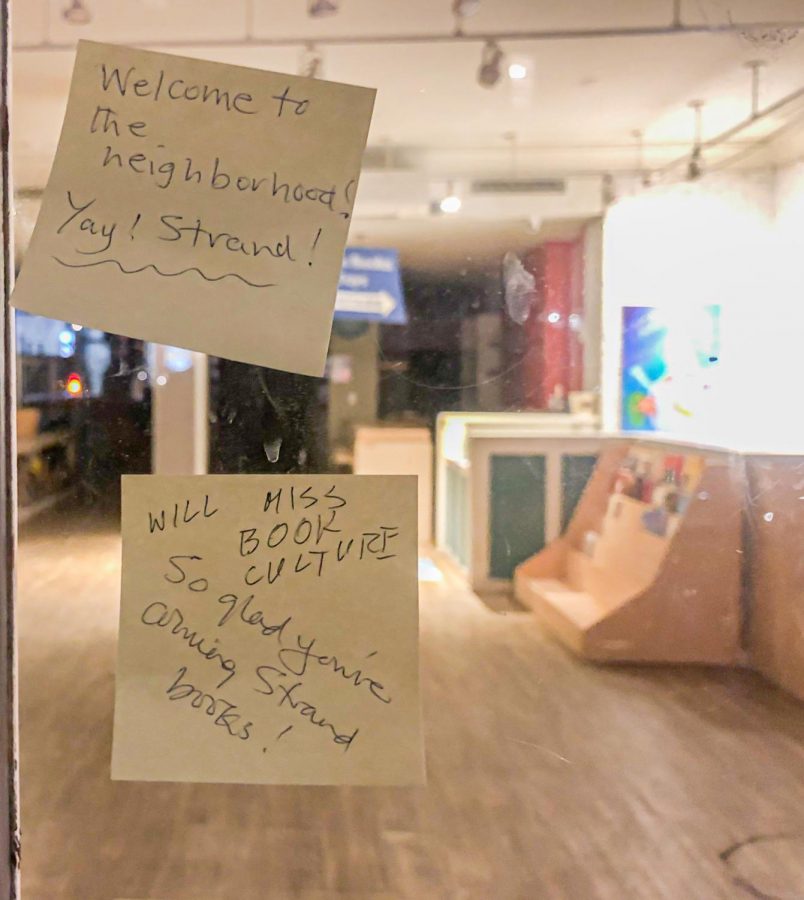 The new Strand location, set to open in March, will take the place of the recently-closed Book Culture on Columbus Avenue and 81st Street.

When I first came to the United States, one of my teachers who had lived in New York called The Strand “the best book store I have ever been to.” The shop was opened 93 years ago, and book lovers still flock to its current flagship location near Union Square, where it’s stood for 63 of those years.

Recently, Strand announced it would open a new location at 450 Columbus Ave. at 81st Street. The previous owner, another small book store chain called Book Culture, lost the space due to unpaid rent in January. The new location is set to open in March, and Strand logos already occupy the windows of the storefront. This will be Strand’s second full-scale store in addition to the two kiosks that already exist in Time Square and Central Park. The new store is the closest outlet for Fordham students, as the Columbus Avenue location will be just a 20-minute walk from Fordham College at Lincoln Center.

Nancy Bass Wyden, the owner of Strand Book Store, wrote on the company’s official Twitter page, “We are so excited to expand The Strand and engage the community of the Upper West Side. We aim to continue the legacy of my father, and his father before him, by bringing the joy of books to everyone.”

Strand Bookstore has provided New Yorkers with over 2.5 million used, rare and new books in every genre imaginable, as well as a sprawling supply of literary gifts. Despite being so expansive, Strand makes sure that each customer leaves with a book they’ll love.

With many students used to traveling to the bookstore downtown, news of the Fordham-accessible Strand location spread quickly around campus.

Beckett Schiapparelli, Fordham College at Lincoln Center (FCLC) ’23, said, “Books, for lack of a better word, are good. I am actually very excited about the bookstore opening so close to our campus.”

Schiapparelli said that he is most excited for Strand’s unique book displays. “Last time I was (at the downtown location), I saw a showcase of books that are forbidden in certain states. Did you realise that one of those books was ‘Fahrenheit 451’?”

Isabella Gonzales, FCLC ’23, said she is most excited for Strand’s unique accessories. “In the past, when I had any spare money, I would always spend some on their badges, stickers — anything I can put on my backpack or computer. I’m just happy that I don’t have to walk all the way to Union Square to get all those things now.”