Looking Back at Fordham’s Forgotten Social Space: The Pub 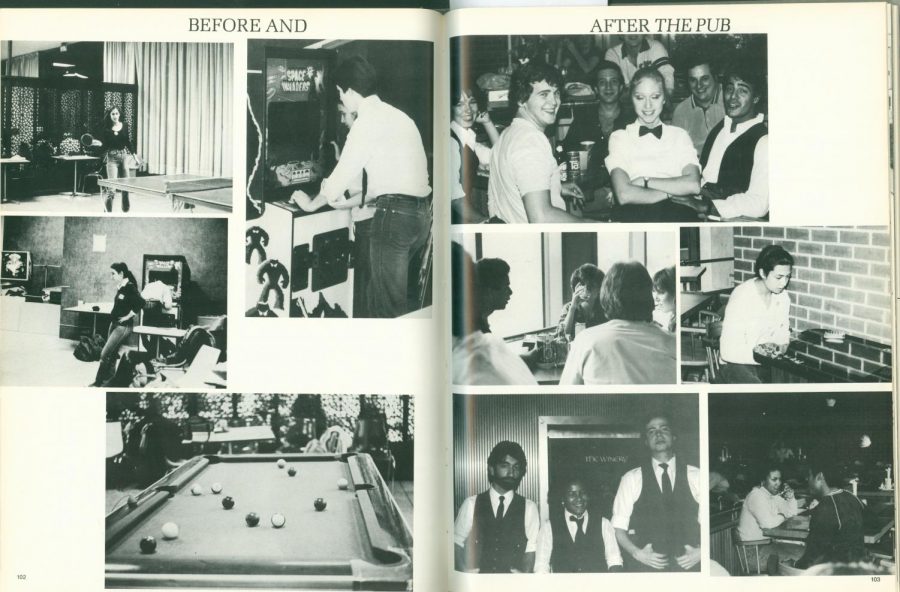 Shown in the 1981 Center Yearbook, The Pub served as the epicenter of the Lincoln Center social scene in the '80s.

In 1981, when New York’s legal drinking age was 18, Fordham Lincoln Center (FLC) featured its very own on-campus bar. It was called The Pub and was housed in what is currently the student lounge in the back of the Ram Café.

In a 1982 Observer article titled “The Pub: Rules of Conduct,” Charles DeStefano, Fordham College at Lincoln Center  (FCLC) ’84, created a clear vision of the social scene inside The Pub.

He wrote, “Muscle bound jocks wearing well-worn ‘Knicks’ t-shirts; alligator-bearing Preps smoking Rothman’s; crusty old professors reading The Journal of Burmese Lexicographers; ninety year-old women celebrating their first ‘A’, these are some of the types that can be seen congregating in The Pub, spending their cash on food and grog.”

The Pub opened in October 1981 in an effort to create a central meeting place for what was then a commuter-only campus, as FLC had no dorms on campus until 1983 — Fordham Rose Hill was the only campus where students could live.

Kate Charlesworth, FCLC ’83, waitressed at The Pub from the time it opened until she graduated. She said, “There was very little opportunity to have a real traditional campus community, because we were scattered all over the area, but we carved out our own pockets of community.”

All waitstaff were students, though the positions were not work-study. To keep outsiders from entering the bar, all students had to show Fordham ID to enter.

Charlesworth said, “The Pub was mostly another place to grab food between classes with the added bonus of having a quick beer! It was a busy, friendly place.”

The bar served food options that were unavailable in the adjacent cafeteria, including pizza, hot sandwiches, wine and beer sold at what DeStefano called “depression-day prices.” He also noted that beer was served in “tacky plastic cups” and wine in “plastic-crystal” glasses.

In a 1982 student review on local bars, an anonymous student wrote, “Microwaved food should be stamped out, but The Pub continues to serve the stuff. The beer makes up for it so we can’t complain.”

Charlesworth described the interior as a “very ye-olde-tavern” with dark wood paneling and brick walls. There was a stage area with a piano, table video games including SpaceInvaders and PacMan, and at one point, a jukebox that played seven songs for just one dollar.

In August 1985, the decision to change The Pub officially to “The Plaza Cafe” was made due to new legislation that would be passed in December 1985 which raised the drinking age from 19 to 21. The drinking age had previously been raised from 18 to 19 in 1982.

It’s unclear when this space ceased to exist as an eating establishment altogether. However, it ultimately became what is now the mundane student lounge rooms. The lounge is utilized today for club meetings and small events, but generally isn’t considered a common meeting place for students to just hang out.

Although FLC now has dorms on campus, roughly 50% of students are commuters. Our small campus, while situated in a prime location in New York City, still lacks a central social space for students. This is something that has been recognized and addressed through the years. With The Pub, administration made an effort to build a stronger on-campus community, though it proved to be only a short-term solution.

Resident Sam Tzyu, FCLC ’21, said, “I had no idea Lincoln Center (LC) used to have a pub, but I think it’d be a cool idea to bring it back to campus.” She continued, “LC’s small campus definitely has its perks, but it also means not having a lot of places to hang out.”

When considering Fordham’s large commuter population, she added, “I think it’d also be great for commuters. I feel like they should have more places to hang out, whether it be in between classes or with friends.”

When asked about the likelihood of something similar to The Pub ever appearing on campus again, Dean of Students Keith Eldredge offered no comment.