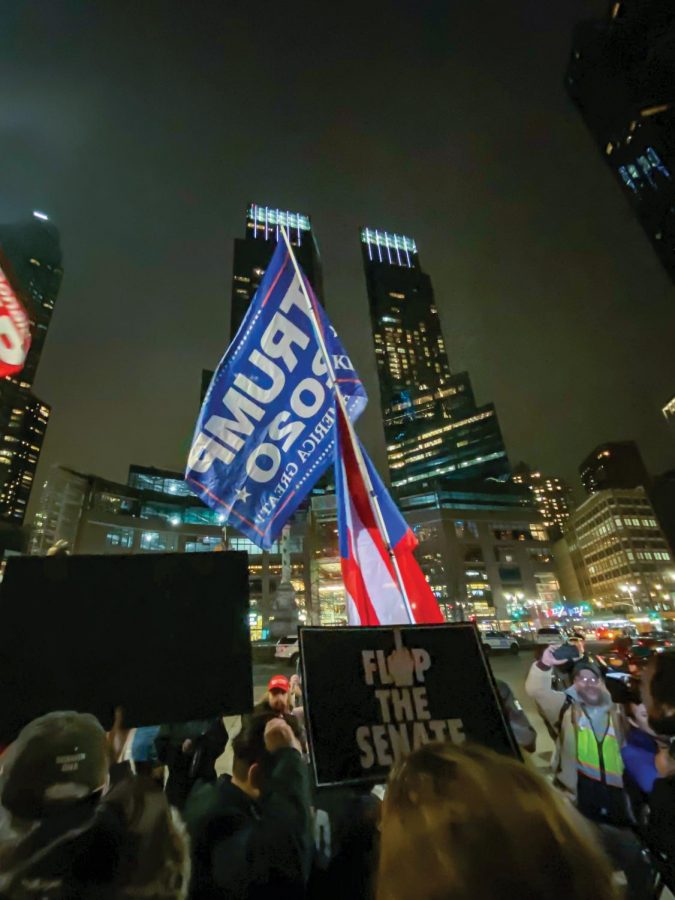 Protesters in Columbus Circle chanted "Trump is guilty" while Trump fans wave flags in his support, after the Senate find him not guilty.

Following President Donald Trump’s acquittal by the Senate and conclusion of his impeachment trial, thousands of protestors responded by mobilizing at Columbus Circle, just one block away from Fordham’s Lincoln Center campus.

The protest took place on Feb. 5 at 5:30 p.m. as a part of a larger campaign by “Reject The Cover-Up,” a coalition of protest groups that joined together weeks before the Senate ended Trump’s impeachment trial without calling witnesses.

This was the third time in American history that a president has stood trial after a formal impeachment inquiry. Representing Trump in his trial was Pat Cipollone, Fordham College at Rose Hill (FCRH) ’88, who graduated with a degree in economics.

After a complaint filed by a federal employee in August 2019, Trump was accused of putting pressure on the president of Ukraine to investigate his political rivals in exchange for military aid and access to the White House. The House of Representatives voted to impeach Trump on Dec. 18 on account of these accusations.

At the end of the three-week trial, the Senate voted to acquit Trump of two impeachment charges: abuse of power and obstruction of Congress.

“Now that Trump’s impeachment trial has ended, progressives must do everything possible to hold Trump’s enablers accountable and reaffirm that no one in America, not even the president, is above the law,” the political director of Stand Up America, one of the “Reject The Cover-Up” leading coalition efforts, said in a press-release statement.

The campaign organized the protest to demand accountability, democracy and reform in American politics.

Among the protestors at Columbus Circle was Gabby Rivera, Fordham College at Lincoln Center ’20. She was on her way home with friends when they accidentally passed through the protest and stopped to observe the scene before them.

“The protest to me seemed like it was on the fly because I didn’t hear about it,” she said. According to Rivera, the NYPD set up the barricades for the protest and it appeared organized and well-contained.

Around the outside of the barricades resided the pro-Trump supporters. “The Trump supporters had this very smug energy about them,” Rivera said. “They saw this as an absolute win.”

On the other side of the barricade, the protestors against the Senate decision were chanting “shame” and “Trump is guilty,” Rivera said. She agreed with the sentiments expressed by the protestors, however she questioned whether the protest was actually significant.

“I felt like there was no weight to it because it’s not like we can reverse the Senate decision. It happened; they made their choice,” Rivera continued.

The College Democrats of Fordham University expressed their disappointment in the Senate’s decision as well. “The House managers laid out an excellent case against the President, and the evidence seems pretty clear that the President is guilty,” said club’s president Michael Fissinger, FCRH ’21.

“While the result of the trial was sadly unsurprising, the impeachment process did paint a clear picture that the president will do anything for himself, even if it means undermining the democratic processes of this country.”

During the protest, Rivera said that one instance which shocked her was a woman holding a rainbow-colored American flag with the words “LGBT is for Trump” written on it. According to Rivera, this woman’s flag elicited a lot of controversy from the protestors around her who questioned her authority to speak on the LGBTQ community’s behalf.

Many of the signs that were held up on both sides of the barricade, Rivera acknowledged, came off as empty statements. “It’s a pattern that stems from when you see a president that says whatever he wants, whenever he wants, and some things…can be completely out of pocket,” she said.

Overall, she didn’t find the protest to be as effective as the protestors may have been hoping: “You can stand in the street all you want, you can show people how you feel, but the Senate is not going back.”