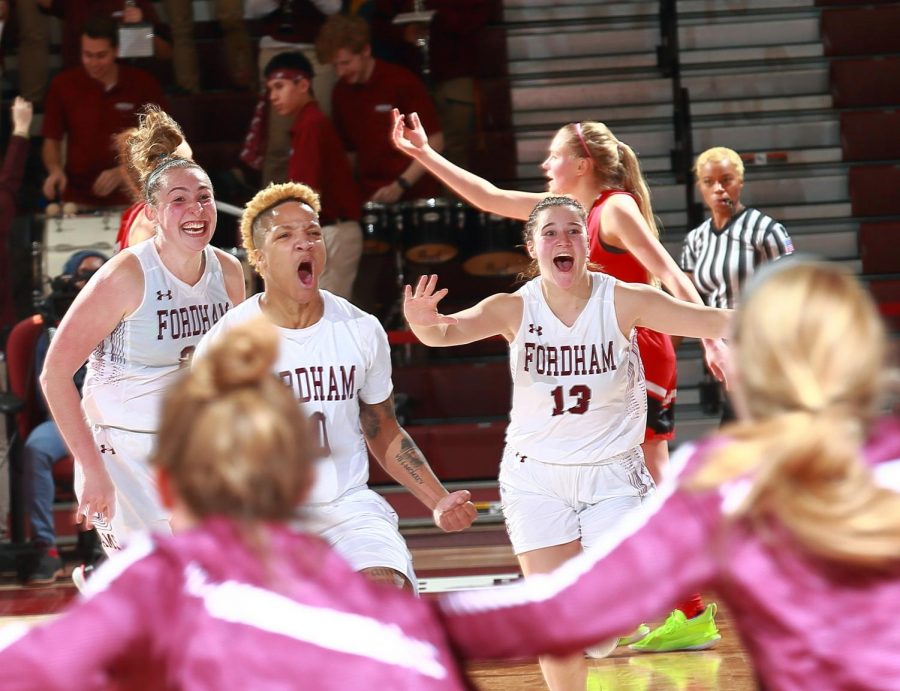 Bre Cavanaugh, FCRH '21, celebrates with her team after hitting a three-pointer in the final seconds to defeat Davidson.

In the last five minutes of their game against the Davidson University Wildcats, Fordham women’s basketball led for just 2.1 seconds. Those 2.1 seconds were the last to tick off the clock before the buzzer sounded, giving the Rams a shocking 47-46 victory at an extremely important time in their season.

The Rams had taken 15 three-point shots over the course of the game. They missed all 15 of them, but it didn’t matter in the end. It was the 16th shot that counted — the one that stunned Davidson and sent a sparse Fordham crowd into a state of bedlam.

Going into the game, Fordham was third in the Atlantic 10 (A10) Conference with a 7-3 record. In fourth with a 6-4 record, Davidson’s potential victory would have tied the two teams for third in the conference, and likely would have ended Fordham’s hopes of another A10 title. Throughout the contest, the teams were as evenly matched as their records would anticipate.

Coming off three straight victories in which they scored 60 or more points, the Rams’ offensive struggles in this game were apparent from the very beginning. Fourteen points in the first quarter and a paltry six points in the second darkened proceedings as the Rams’ normally potent offense faltered possession after possession.

Their defense was stellar and kept them in contention, but offensive woes would be difficult to overcome if they persisted. Fordham had missed their first 10 three-point attempts, with Bre Cavanaugh, Fordham College at Rose Hill (FCRH) ’21, missing five herself. They also turned the ball over on eight separate possessions. A good defense could only do so much.

The Rams continued to sputter in the third quarter as the Wildcats lengthened their lead to nine points, 31-22. Fordham’s Coach Stephanie Gaitley called a timeout with six minutes remaining to stop a 5-0 Davidson run and allow her team to regroup.

The strategy worked, and as the Wildcats’ offense stalled, the Rams finally began to look like themselves again. They allowed only one Davidson basket in the final five minutes of the third quarter and scored eight points themselves to cut the deficit to three points going into the fourth quarter, 33-30.

The break between quarters gave the Wildcats an opportunity to reset, and as they came onto the floor for the fourth and final quarter, both teams peaked simultaneously. Fordham scored on two early possessions to finally take the lead, 34-33. The Wildcats responded emphatically, sinking two three-pointers on straight possessions to put them ahead by four, 38-34.

The two teams began trading baskets, which didn’t bode well for the Rams. They never stopped fighting, but the Wildcats were adamant in keeping their lead.

In the second half, Cavanaugh had finally returned to her usual game, scoring 13 points and taking control of the offense. However, on three opportunities to tie or take the lead with less than two minutes remaining, Cavanaugh surprised the crowd by failing to capitalize. Two missed shots and a mistimed layup on a fast break left fans in disbelief as their star came up short.

After Cavanaugh’s third missed shot with 36 seconds remaining, Davidson regained possession and looked poised to escape with a victory. On the inbound pass, Cavanaugh crossed in front of the intended Wildcat player and intercepted the pass. She was then fouled on the play and sent to the free throw line.

Down by two points, 44-42, with just 33 seconds remaining, Cavanaugh had to make both free throws to tie the game. Despite her struggles throughout the game, she sank both with ease.

When asked about the free throws after the game, Cavanaugh said she focused “on making them the same way I do in practice.” Gaitley reiterated that the team’s focus is “always on the process, never on the result.”

Following the game-tying foul shots, the crowd erupted. With liberal estimates putting attendance at half capacity, the noise emanating from so few Fordham fans defied logic and reason. As loud as they were after Cavanaugh’s clutch free throws, the silence 30 seconds later was equally deafening.

With four seconds remaining, Davidson’s Ally Welling scored on a jumper in the paint to put her team back in front. The Wildcats on the bench were the only excited individuals as the gym around them expressed their disappointment in murmurs. Gaitley called a timeout to draw up a final play, their last chance at escaping with the win.

In a post-game interview, Gaitley said that the original play was intended for Kaitlyn Downey, FCRH ’22, to score on a last-second shot. Before the game resumed, however, Cavanaugh approached her coach with a question.

“Coach, if I get the ball, can I shoot?” Gaitley remembered Cavanaugh asking. To her captain, Gaitley responded, “Sure, take it.”

With Davidson ahead 46-44, the play intended for Downey did not go to plan. She was covered well, and the ball went to the first person open. Cavanaugh received the ball facing her own bench, turned wildly and shot her ninth three-point attempt of the day.

She had taken better shots during the game, but none of them had gone in. This one did.

Following the game, Cavanaugh looked back on highlights in her career and concluded, “I think this one takes the cake. I’ve never made a shot like that before.”

Fordham’s stunning 47-46 win preserves their spot in third place in the A10 and keeps their hopes of another championship alive. The journey isn’t over for the Rams, but a last-second shot has allowed it to continue.

If the bleachers had been full when Cavanaugh hit the game winner, it’s possible that the roof of the Rose Hill Gymnasium may have collapsed or flown off the building altogether. Instead, a roar came from the Rams’ faithful that has not been heard in a long time.

The reaction didn’t come from a well-attended crowd, but an enthusiastic one. Other sports may attract more fans, but no other program on campus earns such loyalty. It wasn’t a touchdown that caused such an unrivaled frenzy, and it wasn’t a dunk.

Instead, it was Cavanaugh’s shot that sent a Fordham crowd into ecstatic celebration on a Thursday night in February. It was her shot that made them proud to be Rams.