Men’s Basketball Rolls Over Against Richmond, 59-53 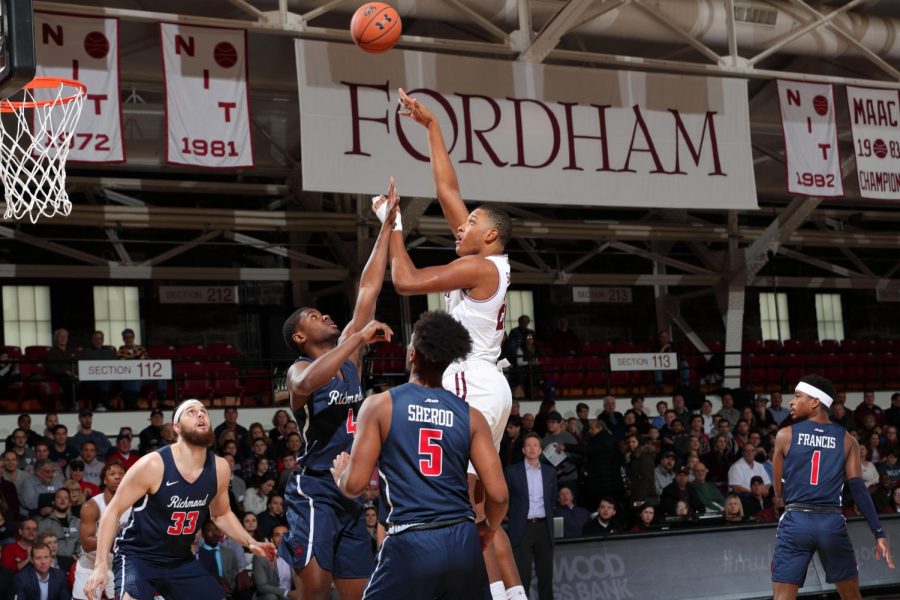 Going into their game against Richmond, Fordham men’s basketball had led at the half against four Atlantic 10 rivals in the 2019-20 season. They lost three of those matchups. Against the Spiders, the Rams exited the locker room for the second half ahead by seven points. They went on to lose by six, 59-53.

After a hopeless loss last weekend against the undefeated Dayton University Flyers, Fordham returned to the Bronx to face a capable Richmond team. In the first 20 minutes, the Rams turned in a pedestrian offensive performance, shooting just 44% from the field.

The source of their lead did not come from any offensive prowess but a severe lack of response from their opponent. Richmond performed atrociously in the first half, shooting 30% on 23 shots from the field and 60% at the free throw line.

It gave Fordham an opportunity, and while they did very little to impress in their own right, their usual lackluster production was enough to take control of the game. With 15 seconds remaining, Ty Perry, Fordham College at Rose Hill (FCRH) ’22, scored from beyond the arc to put Fordham ahead by seven, 30-23. As the buzzer sounded, some in the student section had to look twice at the scoreboard to realize the Rams were ahead.

At halftime, to honor local Catholic Youth Organization programs, Fordham welcomed young basketball players from the Our Lady of Peace basketball team to play a scrimmage on the court. The crowd’s interest was piqued for the first time that day as young men, none taller than five feet, ran up and down the court in a game loosely resembling basketball. Despite their disregard for the general guidelines of the sport, both teams seemed to have mastered the offensive rebound, leading some to wonder if the Fordham Rams would have been better off taking notes.

Preferring to spend their break in the locker room, the Rams reemerged to a crowd drained of its energy following the exciting play of some elementary school students. Perhaps they could blame the crowd for their gradual collapse in the second half. Maybe it was their 15% three-point shooting percentage, their failure to record a single offensive rebound or a slight uptick in the Spiders’ production.

Whatever the reason, Fordham was badly outplayed in the final 20 minutes, with Richmond gradually taking more and more control until the game entered the realm of the familiar for Rams’ faithful.

Fordham lengthened their lead to nine points in the opening minute on a jumper by Jalen Cobb, FCRH ’22, but would go no further. With 16 minutes left to play, the Spiders pulled within four points of the lead. With 13 and a half minutes remaining, they were a single point down, but a brief offensive flurry gave the Rams a cushion against the inevitable.

Five minutes later, the game was tied at 44, and 30 seconds after that, the Rams were behind for the first time in the contest.

Falling behind gave Fordham an interesting test of fortitude. In a time of adversity, fans hoped to see them fight back and regain the lead they had held all game. Instead, they allowed six unanswered points and failed to score on four straight possessions. The packed Rose Hill gym was reduced to murmurs, and a vocal Richmond section of the crowd took over in the final minutes.

Victory eluded the Rams once more in a 59-53 defeat. Perry; Cobb; and Antwon Portley, FCRH ’20, all managed to score double digit points, while Joel Soriano, FCRH ’23, managed 11 rebounds, two of them counting as Fordham’s only offensive rebounds all game. But the team’s reputation continues to worsen after another inept, overwhelmed performance.

If they were ever to win against a team like Richmond, Saturday would have been a rare opportunity to do so. The Spiders struggled, as any team occasionally does, but eventually found themselves in the second half. Such a recovery should be expected of a team at this level of collegiate basketball. Fordham’s performance, on the other hand, exposed them as a poorly coached, poorly conditioned program with a very low floor and a ceiling to match.

Bring back the elementary school kids.